Interview with Kyotarou Hakamata, “People in a Skit” at MA2 gallery

Kyotaro Hakamata is an artist known for his colorful striped sculptures. His work stimulates our imagination. In this interview, he told us that his creation is based on the tolerance of uncertainty. Don’t let your imagination limit your creativity. 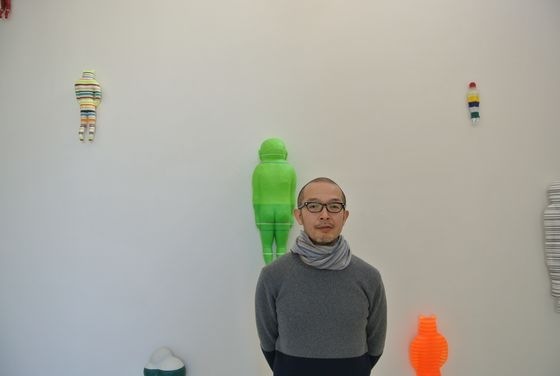 Stripes are stronger than shapes, they destroy the sight. 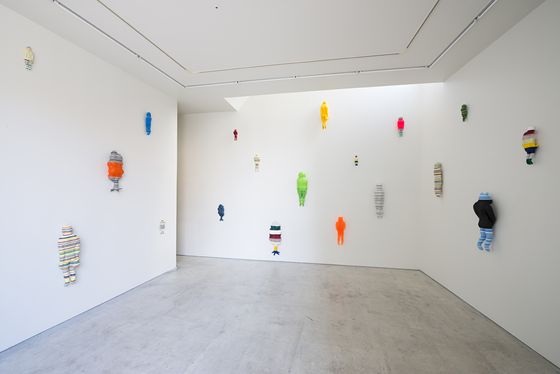 Installation view of “People in a Skit” at MA2 gallery. Photo by Ken Kato

- Can you tell us why you got interested in using stripes in your work?

Stripes are very strong visible elements. They destroy shapes. If I use only one color for a sculpture, its shape could be more visible. Stripes in my work block our sights’ ability to recognize the shapes. In other words, shapes may look meaningless with stripes although it is actually formed in front of the viewer. I simply got interested in that contradiction. 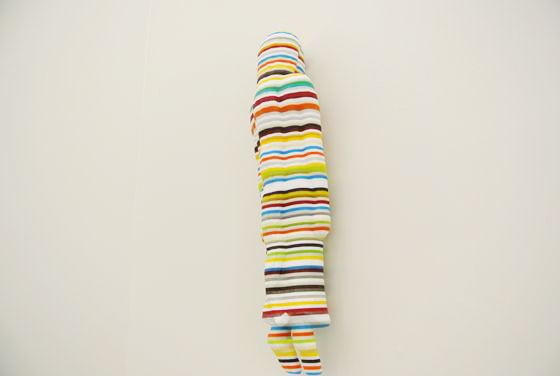 Stripes destroy shapes but moreover, they also hide the texture of the sculpture’s surface. As you see the work close up, you will notice its surface is actually rough and has a sensitive face. Although, when you see the sculpture from a distance, the stripes erase those details. 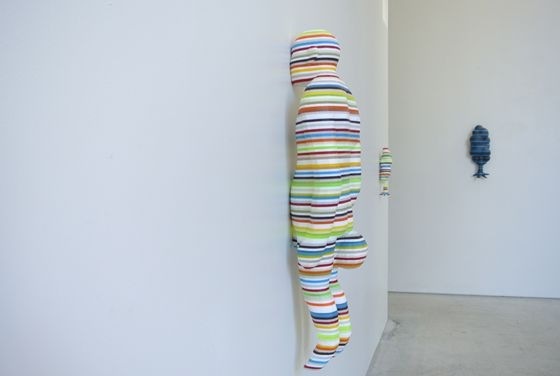 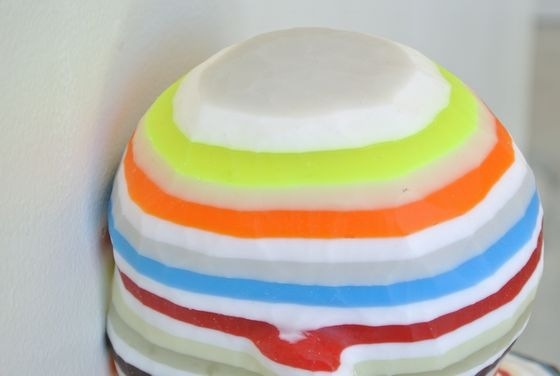 Close up look of “Man with a bottle”

For example, this sculpture has a wide orange color part sandwiched between stripes. In the plain orange part, textures are visible compared to other parts. 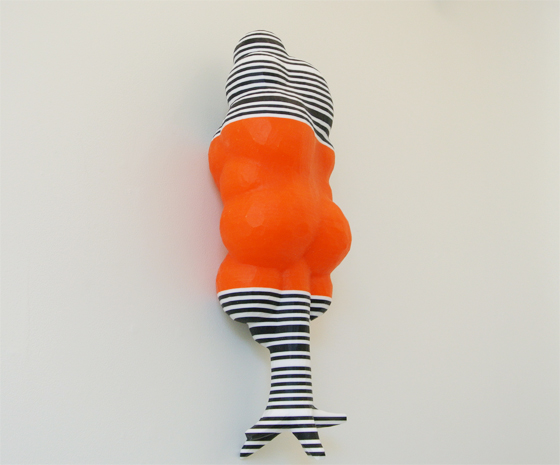 -At a first glance, your works look as if they are carved out from a large block. How did you create these sculptures?

I first create a model by carving styrene foam. Then I slice it horizontally, trace each piece on an acrylic plate and cut it out. Finally, I lay one acrylic piece on another to create the same shape as the first. 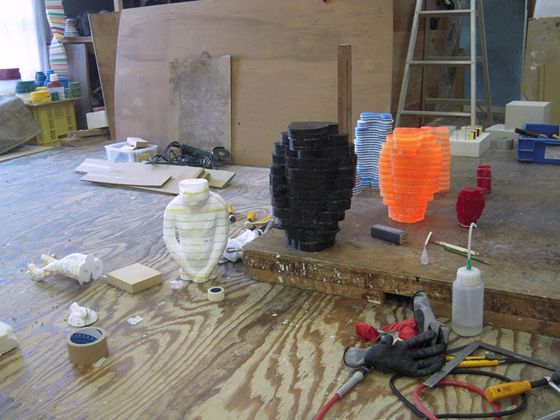 Layering acrylic slices one on top of another

I try not to create details too much when I am working with a styrene foam. I try not to realize exactly what I want to make. When it looks barely like a bear, for example, it is done.

For the larger or smaller version of the sculpture,?I use a printer to enlarge or scale down each shape of the slice. 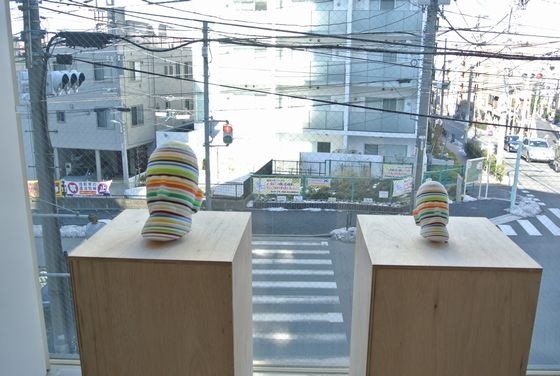 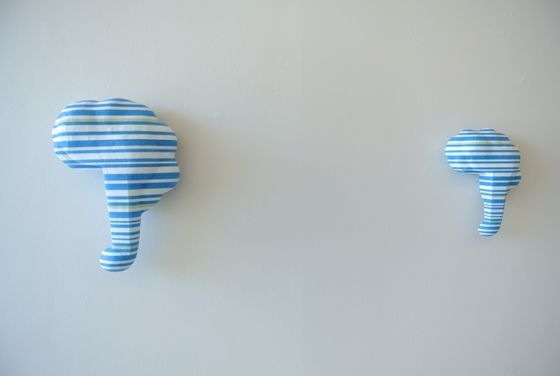 - Layering slices on top of one another sounds like a unique method compared to carving.

It is actually not that special of a method in sculpture history. For example, earthenware is made by layering one round clay on top of another. The huge Buddha sculpture in Nara (Western historical prefecture in Japan) was also created from layering from the bottom up to its head.

I can say that layer-structured sculpture is one of the traditional methods of sculpting along with carving. I am fulfilled with the process using both carving and layering in my work.

By choosing color patterns systematically, unpredictable elements are brought into my work

- How did you come up with the idea of this exhibition “People in a skit” ?

This exhibition “People in a skit” was developed from the idea of the series “Families”. It was an installation of colorful human bodies which consisted of a father, mother, daughter and son placed on a wall. 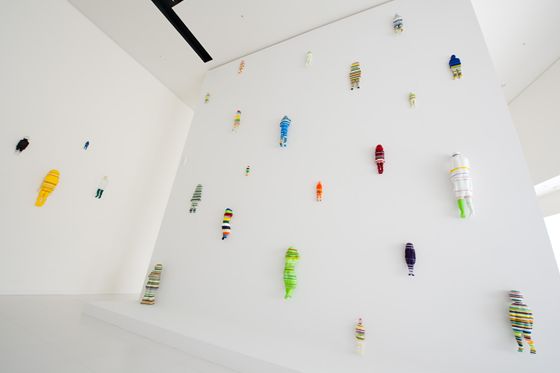 I didn’t have the idea of creating about my family at first, but wanted to display various types of identical shapes spread on a wall. To make each shape identical, I came up with the idea of my family, which consists of male and female, young and adult. I thought these four people as a unit.

For this exhibition “People in a skit”, I thought about identical forms first and came up with the 5 shapes which are woman with long hair, man with bottle, infant, bear and tree. As I started to work on them, they seemed to look like people who represented each roles as woman, bear or tree for a festival. 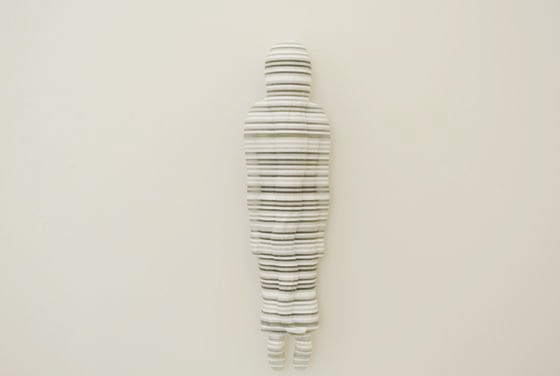 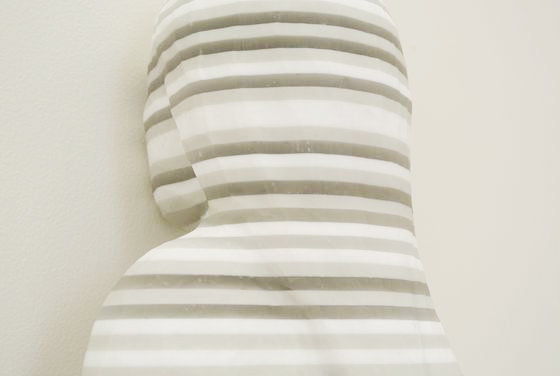 They are not actual bears or trees but figures representing them. That is why the exhibition is titled “People in a skit”.

When you see one is playing a role of a bear, it can be regarded as a fake bear. But when you see they are enjoying their role in a festival and at some point, their minds are connected with the god individually, and they are real. A contradictory aspect such as realness and fake-ness is included in my work. 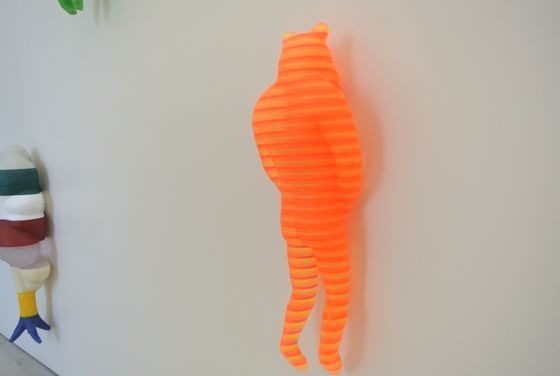 ‐It is interesting that you come up with a concept while you are creating instead of having it from the beginning.

When I think too much about the concept, it tends to end up creating a work related with the words of the concept, putting a shape to the concept. I start with scribbles and do not create a perfectly shaped model with a styrene foam. That is because I want to leave a room in my work so that I can notice things afterwards. I try not to reach a conclusion after each step and move forward. 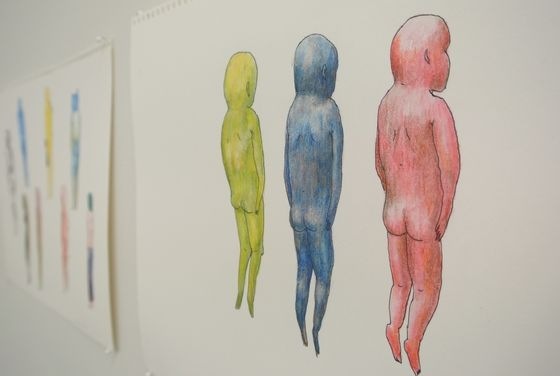 ‐Is it easier for you to work without thinking of the final concept?

Not really. Sometimes, the concept goes forward and I can imagine what the work will be like in the middle of the process. Knowing what I am creating exactly can be comfortable and reassuring process but it is also dangerous. When you are comfortable, it also means that you are bound by your imagination. Uncertainty is insecurity. You don’t know how it will end up but it also means that it contains a lot of possibilities.

I am not satisfied with creating a sculpture by choosing a motif and a medium just as I want. It may fulfill the creator but it tends to end up with an object which is lacking of originality. It doesn’t exceed one’s imagination.

‐You mean one’s imagination itself may limit the creativity?

As I am long experienced with sculptures, I can create whatever I imagine. Techniques are accumulated as you continuously work on them. Sculptors tend to love the medium they use and their expressions are used to be closed and not open to others. Working only with one’s techniques could be boring to the audience. To balance this situation, I need something unpredictable and out of my control.

- How did you let something unpredictable happen to your work?

One of my methods is to decide size and color patterns systematically. I created 5 versions of shapes (woman, man, infant, bear, tree) in 4 sizes for this exhibition. That means a total 20 types of sculptures. Beside that, I prepared 5 color patterns: narrow stripes, bold stripes,? one color sanded with stripes, narrow stripes with similar color, and one color with some lines. To choose one color pattern for a sculpture, I created a table and plotted each shape systematically. I neglected my senses which suggested which shapes were suited for each color.

This is the uncontrollable part in my creation. Reaching outside of my own senses and bringing it back to my work. Although color patterns were determined systematically, it is interesting that they started to show their own identities. For example, this one (below) may look like a tree standing at night, although it happened to be like this. 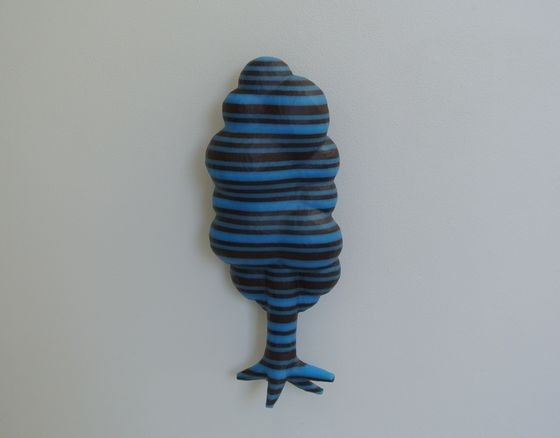 ‐Can I ask especially which sculpture was out of your imagination?

Actually, the bold stripe pattern was something I could barely work with. I felt it was destroying the shape too much. But when I see it in the exhibition space, it holds an important position in the entire installation. 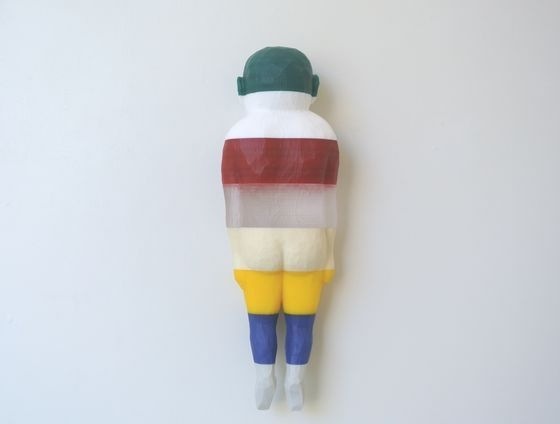 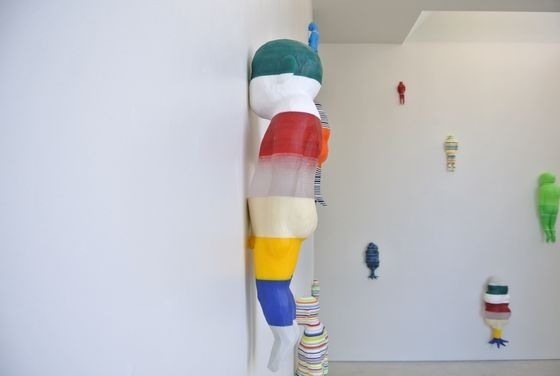 -How can you tolerate uncertainty?

Choosing a comfortable option will end up with an unsatisfied result. I learned from my experience. That is why I try not to overcome my anxiety. When I feel overwhelmed, I work on another sculpture and I don’t think too much.?I am working with my anxiety.

-That is a great lesson for other creative people. 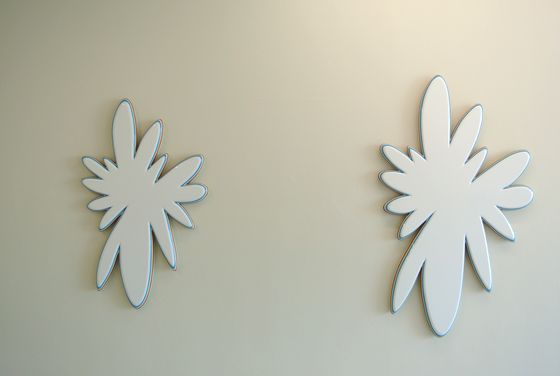 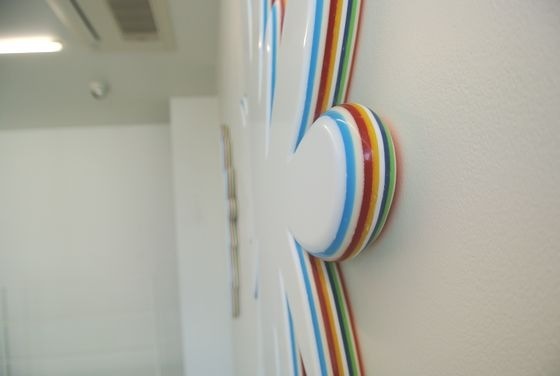 “Explosion – Large and Small” from its side, colorful layers.