Girls with flowing hair, blossoming flowers in pink and purple, green and cream polka dot dresses, birds and lions inhabit Sakae Ozawa’s paintings. The colorful, fantastic themes in her paintings overwhelm you and strike you as overly girly-girly at first. But getting to know the artist, you realize that her paintings are anything but saccharine fairytales.

Painting without stories that evoke stories in viewers’ minds

- Your paintings evoke picture books and seem to tell stories.

I don’t have a specific story or a setting in mind when I begin painting. But I think surrounding environments influence my work, even if I’m not conscious about it, and they show up in my work. I’m not painting abstract objects, but real things and living beings that actually exist or could exist. When depicting such subjects, they have to have a context, relations within the painting, so they create a story on the canvas. But I don’t draw a person in a particular way in a particular place for a particular purpose. I try not to limit myself, and move around these subjects, and hope that my audience will compose their own stories in my paintings. 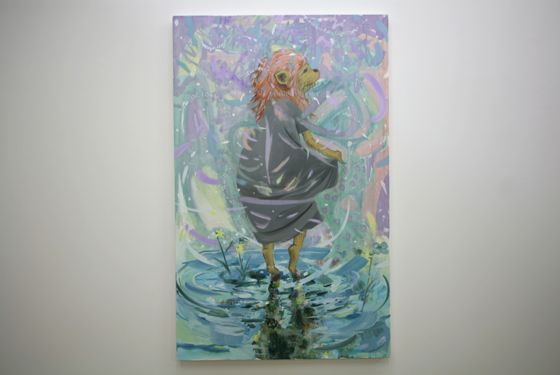 Sometimes, I do have my own reasons for painting, for example, this lion/girl figure (“I pass over water, and pass over water again/ I look at the flowers, and look at the flowers again”). I had a reason for painting it, but its significance changed for me as time progressed. After I finish a painting, it leaves my hands, so I find new discoveries in them as well. It’s almost like it’s not my work. This painting (lion/girl) holds a lot of that. I started with a very vague idea of something dancing in the fog. But it’s not like I had a specific story that led to this image. Details appear as I work. Like its (lion/girl’s) facial expression, which you can’t tell if it’s happy or sad. 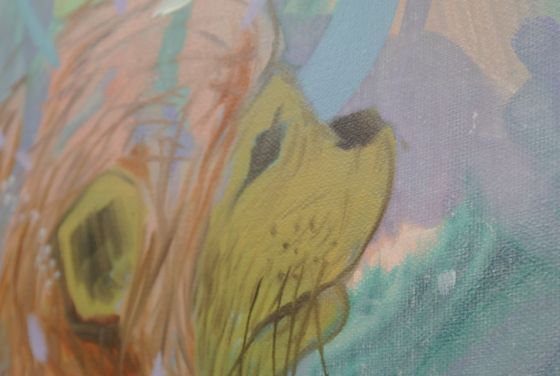 - Your paintings appear very bright and colorful, but they have an elusive quality as well.

My paintings trigger different reactions from people, who in turn conjure original images in their own minds. I think this is a form of communication. It’s strange–my paintings can influence people and develop into original ideas in their own minds, but they still originated from me. That’s not the main purpose of my paintings, but it’s a way of connecting with people. 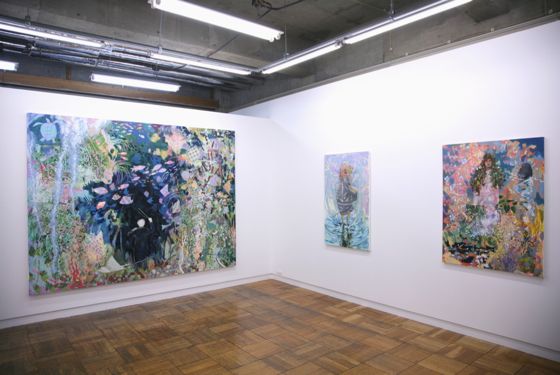 Paintings that simply appear from shapes, colors and words

- How do you start your paintings?

Seasons and my surroundings influence me. But I don’t know if anything in particular sets me off to start painting. I rarely start a painting with a specific image in mind. I usually have abstract paintings of backgrounds and sketches with different colors prepared, and they lie around for a while until I see something there, like I see a person. This one (“Leviathan”), it was just a brush stroke left from when I was painting the background, which eventually turned into this tail. 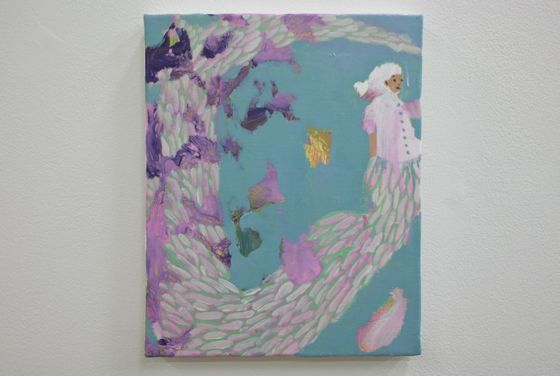 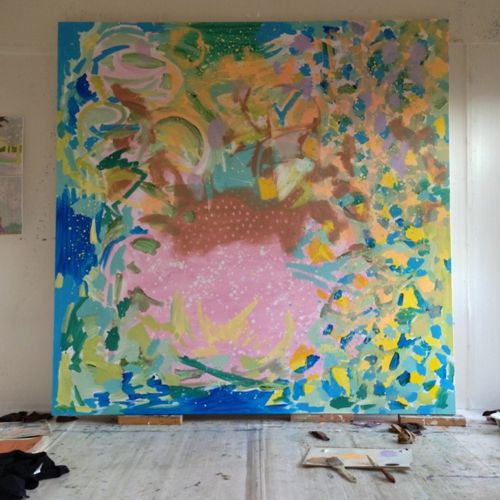 For “Orchestra Under the Water,” I actually had a picture in mind before I began. This one may have started with the words, which ended up being its title. I thought up the words first, and imagined an orchestra under the sea. It was also around the time a new aquarium opened by the Kyoto train station, so I went to do some sketches. But usually I don’t start off thinking, “this is what I’m going to paint.” 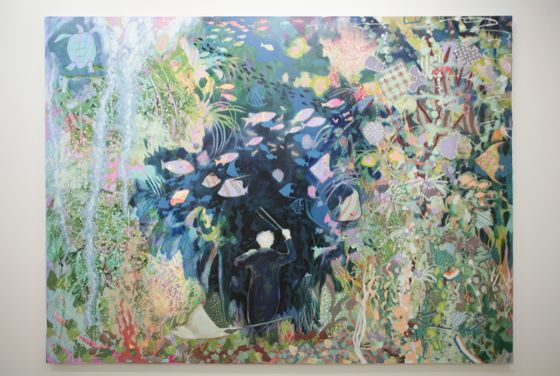 “Orchestra Under the Water” by Sakae Ozawa, 2012 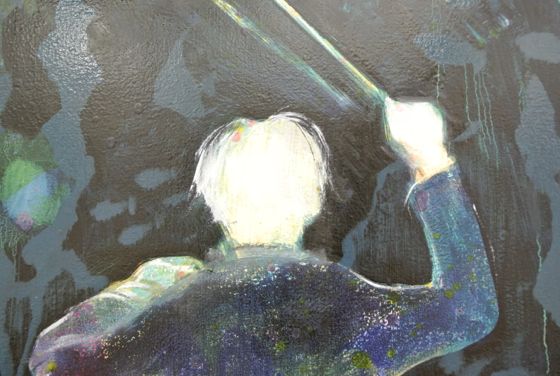 Close up of “Orchestra Under the Water” by Sakae Ozawa, 2012

- Nature seems to be a main motif in your paintings.

I like painting natural subjects. If I’m going to paint, I might as well paint something I like. Plants are just there, they just exist, and I think paintings develop through the observation of natural subjects. And I learn from nature as well. It’s difficult to say why I like natural subjects, but I think it’s something that’s at the core of my work. If I’m taking a walk in a forest, I often do think up of paintings. But I’m still struggling with depicting fish. 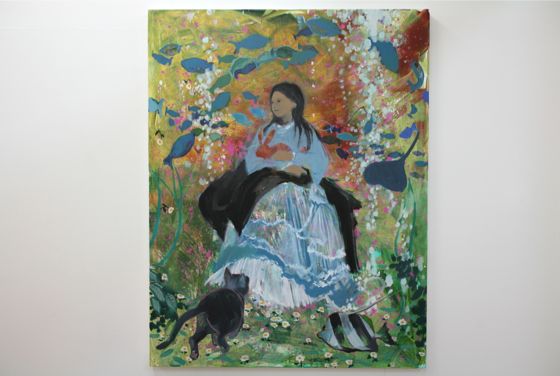 “How many miles till yesterday’s dream?” by Sakae Ozawa, 2012 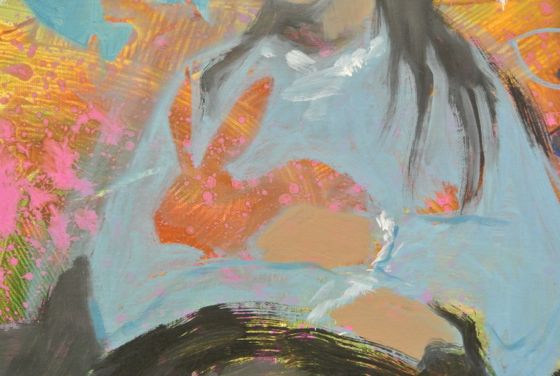 Close up of “How many miles till yesterday’s dream?” by Sakae Ozawa, 2012

- What else inspires you?

I like reading books, especially novels. I also get a lot from films. I recently saw Toto the Hero by Jaco Van Dormael, which was really good. It recently came out on DVD. I like the way the film depicted sadness and death, in a sort of detached way. It was not over-sentimental. This painting (“The Castle”) was also from a scene in a movie. The scene impressed me so much that I had to pause the film. 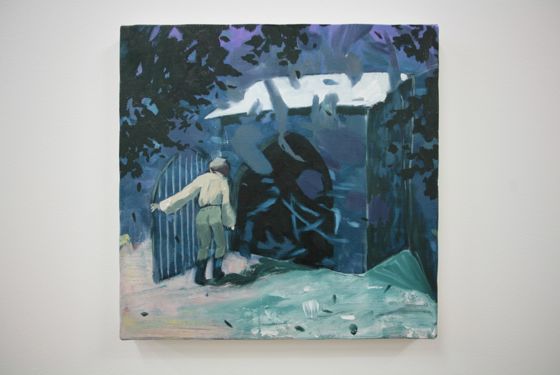 Universal paintings that are both Japanese and western

- You’ve spent some time in Vienna. What kind of reactions did your receive in Vienna?

When I was in Vienna, people told me that my paintings were very Japanese. I don’t know what they meant–maybe the colors I used and the way I depicted people. But in Japan, people–especially those who know I studied abroad–tell me that my paintings are very western. It makes you wonder what “Japanese” and “western” mean. I don’t think about universality when I’m painting. But if I dig at my own core, I think it leads to universality, because we’re all humans. That’s something I felt when I was living abroad. 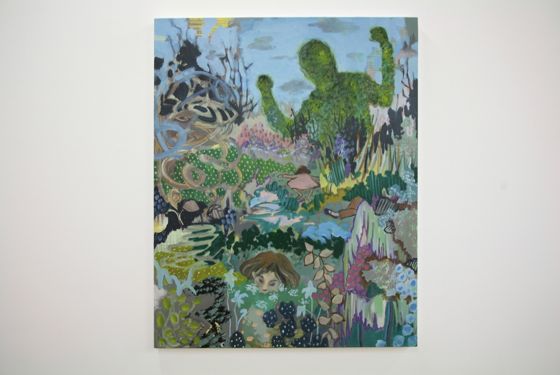 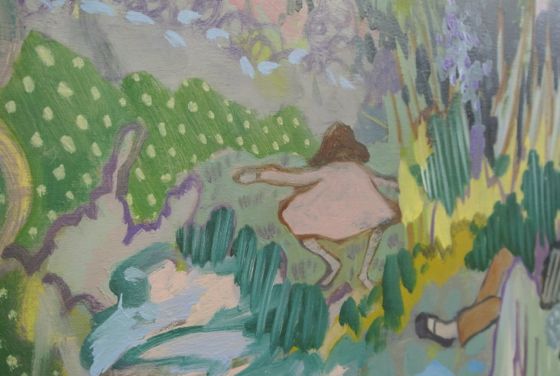 - How did your time in Vienna influence you?

People didn’t know who I was or much about Japan. I was just a girl studying painting. I tried to converse with people in German, but in order to convey what kind of person I was, I had to do it through my paintings. Europeans are very good at communicating, so other students with unfinished paintings were able to convey their concepts and visions orally and do well. I couldn’t do that and had no intention of doing that. I had to create something equally or more convincing on canvas.

Expressing emotions without being sentimental 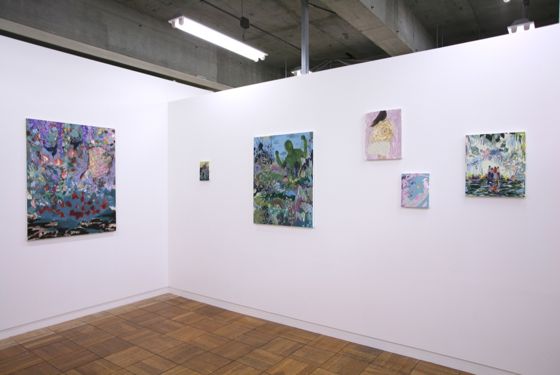 - What’s different about this exhibit from past exhibits?

Half the paintings in this exhibit were first shown in Kyoto (Mori Yu Gallery Kyoto, October 5 to November 22, 2012). The other half, the smaller pieces, I painted after the Kyoto exhibit, in the two months since I’ve moved to Tokyo. Until the Kyoto exhibit, I didn’t know which way to go next, but during that exhibit, I was able to choose a direction. Something clicked. When my paintings were laid out in front of me, I knew that this wasn’t where I should be, and I was able to move on. It felt like things have finally started to move. I didn’t have to think as much, and my hands would paint automatically.

- What was it that you realized in Kyoto?

Lately, I’m not digging and searching within so much. I’m more drawn to connecting with the outside world.

-We’re very excited to see where you go next. Thank you for taking the time to talk to us today. 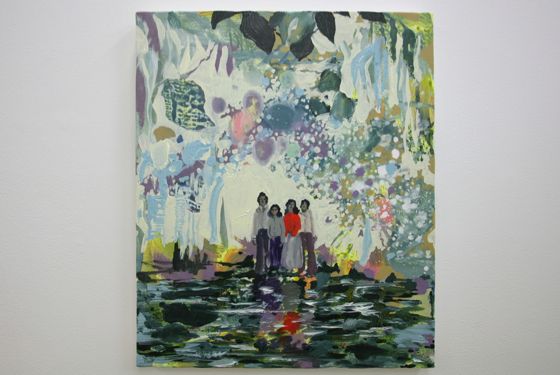 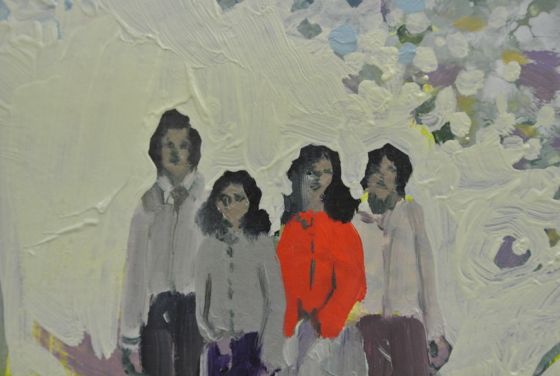 Just as her paintings are not as cheerful and simple as they seem at first glance, the title of this exhibit, “Empty forest,” is not as literal either. Ozawa explains that for something to be empty, there must be a sense of fullness; it must have boundaries. Though what fills that emptiness depends on the individual. The exhibit’s eponymous painting is not exactly “empty” with a clear female subject and bursts of floral splashes and colors. But it strangely captures the void implied in its title as well. 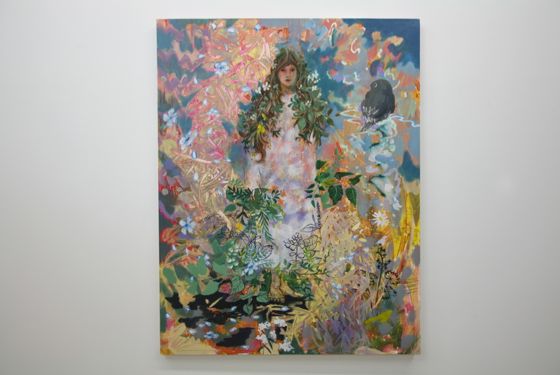