Hiroshi Fuji “Where have all these toys come from?” at 3331 Arts Chiyoda 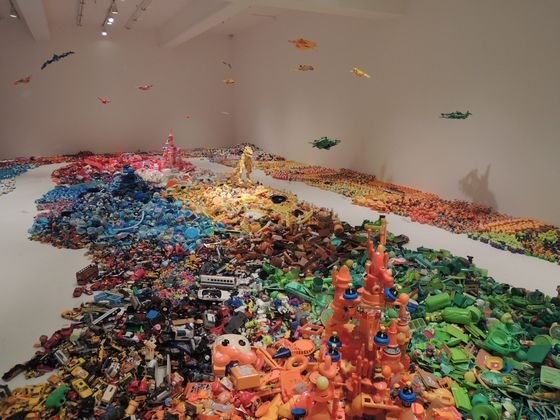 Exhibition view of Hiroshi Fuji “Where have all these toys come from?” at 3331 Arts Chiyoda

We have introduced Fuji’s work on Azito before but this time, I am happy to show his enormous number of toys brought to an exhibition space. As you can see in the photo above, they don’t look like toys anymore but like color palette. It was his solo show focusing on his long time project “Kaekko (= exchanging)” and how these toys could get together. When you continue anything for a quite long period, it will become an enormous power. He has proven that fact.

Change something not valued in the society, into a powerful one. 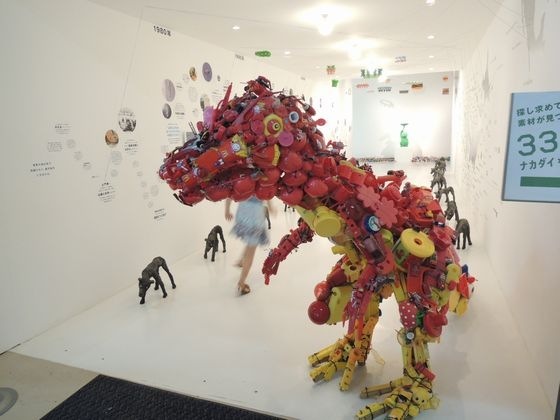 Entrance of the exhibition of Hiroshi Fuji “Where have all these toys come from?” at 3331 Arts Chiyoda 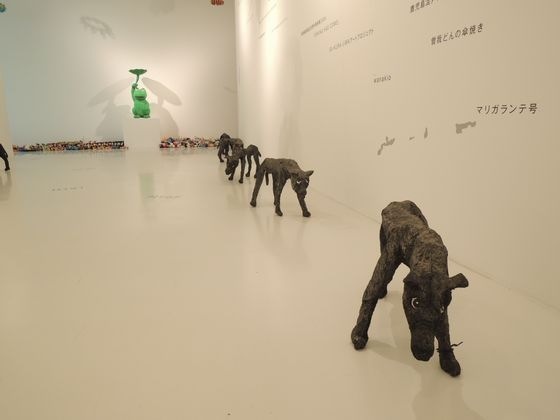 Black skinny dogs lined at the entrance of the exhibition

At the entrance of the exhibition behind the red dinosaur, black skinny dogs were lined staring at the visitors with its strong eyes. In Fuji’s earlier career, he met a black dog in Papua New Guinea. Despite the dog looked weak, it stood up against a wild hug and he was shocked by the dog’s transformation. It was energetic and even beautiful. Through this experience, he established his artistic concept of “transforming existences that not valued by society, into special ones”. 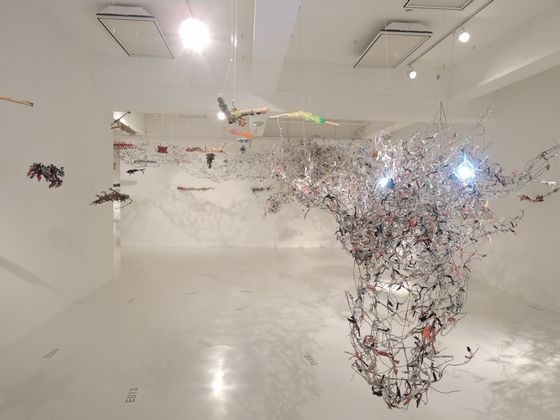 When I entered the exhibition space, a large dragon was facing at me with his shining eyes. This dragon was made of waste materials brought from the famous festival called “Nebuta” which is one of the largest festivals in Japan.

On the official Nebuta website, they explain about festival as below:

At the festival, more than 20 large lantern floats depicting human figures are paraded through city streets. These floats are called nebuta. Each float is accompanied by haneto dancers who dance wildly to ohayashi festival music, adding to the excitement of the summer night event. 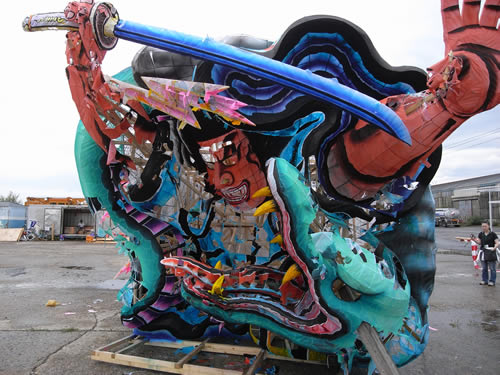 The large Nebutas are discarded after the festival and Fuji decided to get one of them to change it to something. After negotiating with several groups who own a nebuta, he finally got one (picture above). It was a monument of Michizane Sugawara, a man who was smart enough to work for an emperor but relegated by the new leader. After his death, many ominous things happened and people said that the ghost of Sugawara has made things happen. And this nebuta was expressing his anger. 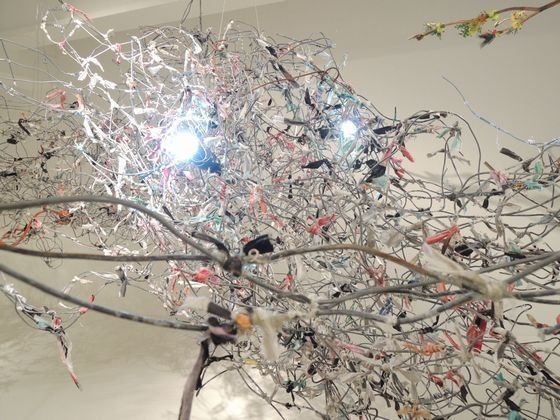 Close up look of the dragon’s shining LED eye..

Understanding the story behind Sugarawa, Fuji transformed the nebuta into a dragon. It is like Sugawara changed himself to a dragon and went up to the heaven, healing his soul. 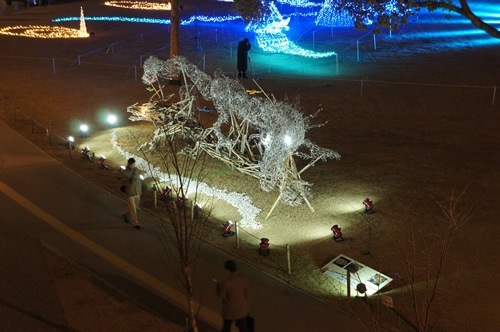 Enormous number of toys creating a dream like scenery.

The main part of the exhibition was this room. 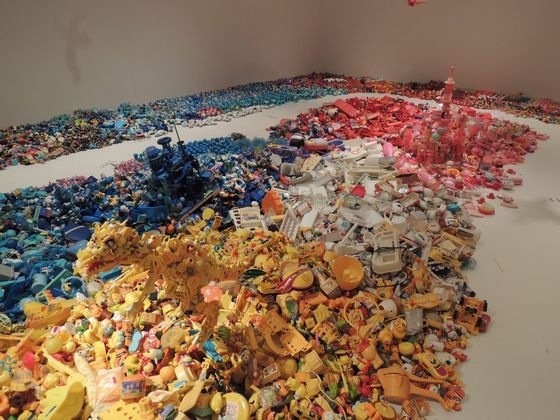 Exhibition view of Hiroshi Fuji “Where have all these toys come from?” at 3331 Arts Chiyoda

Enormous number of toys are separated by types and color to create this amazing scenery. It is a dream land for kids and also for adults. Fuji created dinosaurs and birds by combining these toys and they were placed lively in this dream space. Without his idea, those toys could have already lost their lives as a waste material. 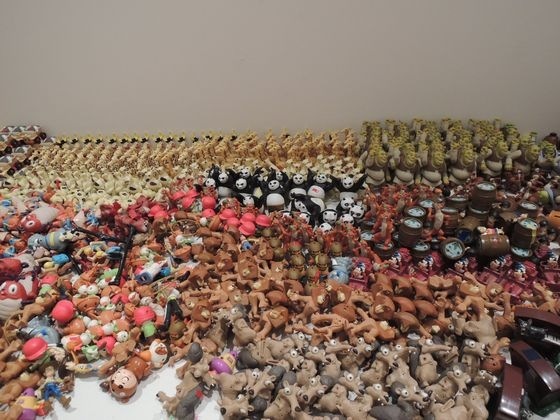 Toys are lined and placed 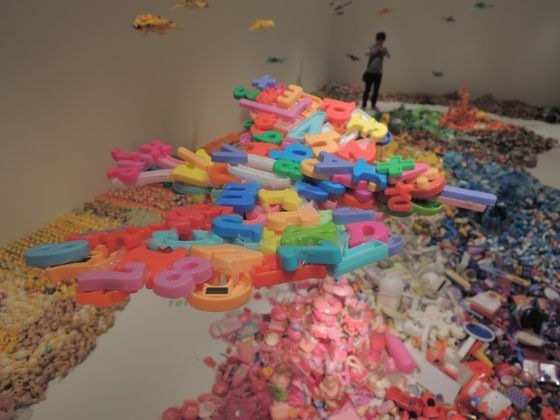 A bird made of number toys.

Then, how could he collect these toys? There is a long history behind it.

Back in the late 1990s, Fuji could not afford the community fee to dispose the house waste and started to place them at his home by sorting them by materials. One day, he hold an workshop for kids using those wastes.? He asked kids about what they want to do and they answered that they want to open a toy shop. Fuji had an idea to create a community through his activity and made this opportunity to realize it. He set up the shop as a place to exchange toys. If a kid didn’t bring a toy, then he/she can do a little job to get points and use it to get a toy. And this event was named “Kaekko” started in 2000. 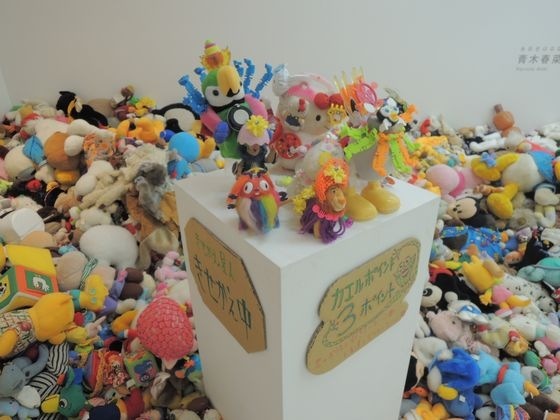 You can get 3 points by making these pretty figures combining several dolls.

Over the last 13 years, this “Kaekko” event has been held for more than 5000 times! And now, he has more than 50,000 toys collected at his place. This magical view was created with a long history. Fuji’s imagination changed a pile of toys into a dream land. 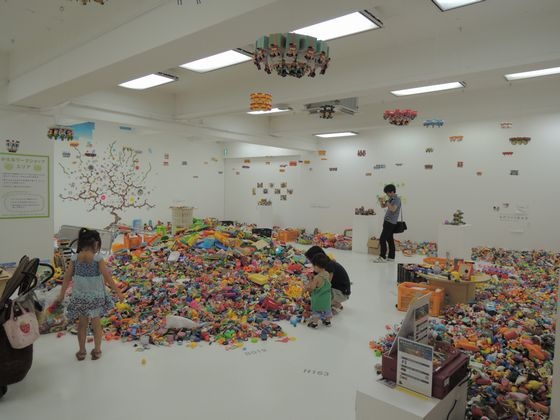 View of “Kaeru Workshop Area” counter settled next to the exhibition space.

I am pretty much moved by the power of number and continuity. Collecting and managing 50,000 toys must not be an easy task. It is not a job required by anybody (of course) and just patience may be required. But going through all of it, Fuji gave us a great experience.

Doing something continuously may make a big leap in the end. It may not have to be collecting a physical objects but like writing down tiny ideas on a papaer. Continuity has a big potential to explode in the future. Fuji shows that it can happen.