“The Echo?Although I am still alive”, 17 young Japanese artists gathered in Berlin 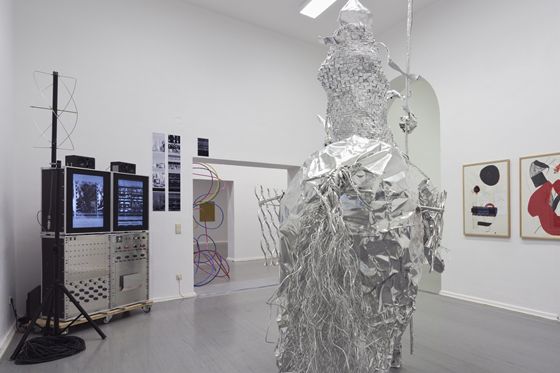 Exhibition view of “The ECHO” 2012 in Berlin

This Summer in Berlin one was able to visit the second variation of a show born 4 years ago at Yokohama ZAIM in Japan. “The Echo – Although I am still alive” showed the work of 17 young Japanese artists from whom 10 are currently living in the capital of Germany and through them the variety of languages, styles and approaches contemporary Japanes Art has to offer.

As the homepage explains, these artists search for artistic independance after the singular force of Superflat in the Japanese art-world and show a colourfull variety of different styles. Walking through the Kunstraum Kreuzberg/ Bethanien the open-minded visitor is able to discover that there is more to a Japanese art-style than Manga-heroes and plastic aesthetics. 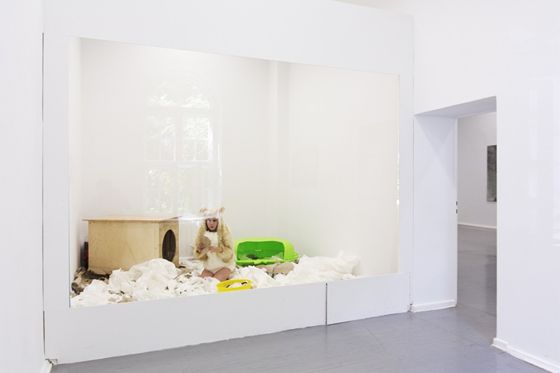 Sako Kojima having a performance “The reason why I became a humster” at “The Echo”, Berlin, 2012

As one can expect you will find a wide range of different medias – modern and classic – all of which are integral part of contemporary art. Futo Akiyoshi blends the boundaries between flat surfaces and three dimensional bodies in his oil paintings, Toshihiko Mitsuya builds a huge,shining warrior out of poor, everyday material such as aluminium foil and Sako Kojima transforms herself during a performance for the opening into a pet-hamster. Very different aesthetic principles, from monochromatic paintings to multicoloured, room filling installations made of Hula-hoops, are part of the exhibition and show that the artwork was not selected to illustrate a homogenous curatorial concept but an artistic landscape full of changing facettes and original ideas.

A Fusion of the Future and the Past

That art can link different centuries with each other and works as a bridge shows the work of Kounosuke Kawakami that gets its solemn atmosphere from the combination of traditional elements such as the classic use of perspective, but depicts modern buildings and combines hereby also two disciplines – architecture and painting. The landscapes he produces do not seem to belong to any specific period of time are a conglomat of the present and the past. 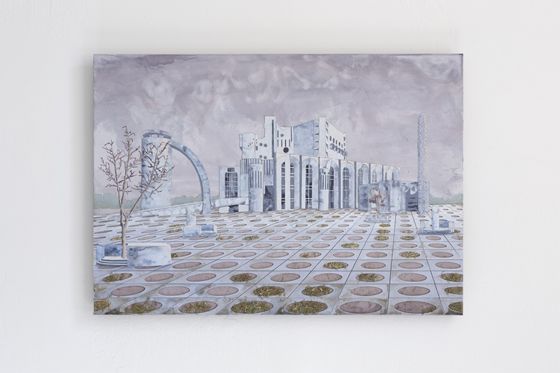 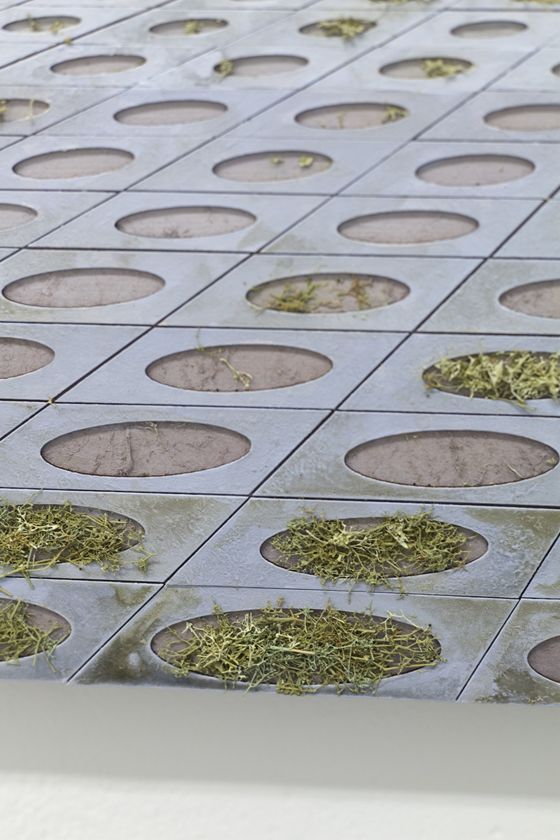 Art that combines elements seem to be found in a great number in this exhibition. Another example would be Futo Akiyoshis “Room”. The clear gold-colour of his paintings seem to bend inwards when looked upon closer, no paintbrush is visible – in a way they seem artificial, not handmade The simple geometric form tricks the eye in a very fundamental way. By using a two dimensional surface and making it appear to have three dimensional qualities, the artists uses an effect that we are very used to interpret in a specific way. The sketch of a room does not stretch out of the paper and does not create actual room, but we do regognize it as such anyway. The very minimalistic form and the reduced colouring creates both, an illusion of space and an awareness for what we are really looking upon. The concentration on this one principle of classical painting makes it by itself more visible, while simoultaneously other elements – such as shadows – that would normally emphasize this effect, are absent. The colour gold, in its baroque splendour, gives the whole thing a playfull note that attracts the eye, although it was chosen purely as a means to extract optical phenomena. 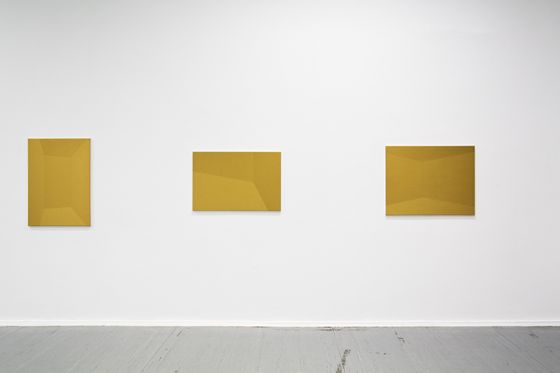 Hula-hoops completely filling out the room

Kengo Kito created a playground of his own, made entirely out of Hula-hoops. They accumulate in one room, seem to fill it out completely, frozen in the movement they were made for. The essence of their very being appears to linger in every hoop in the room, as if they would, though motionless, still mean to swing around turning hips. The single parts are linked like the cells of an organism, deemingly infinitely reproducing themselves and sparkling of vitality. Well when I wrote that one would look for plastic aesthetics in vain in this exhibition, then this can be seen as the exception, although the colour and the material is characteristic for the ready-made, not necessarily the artwork. 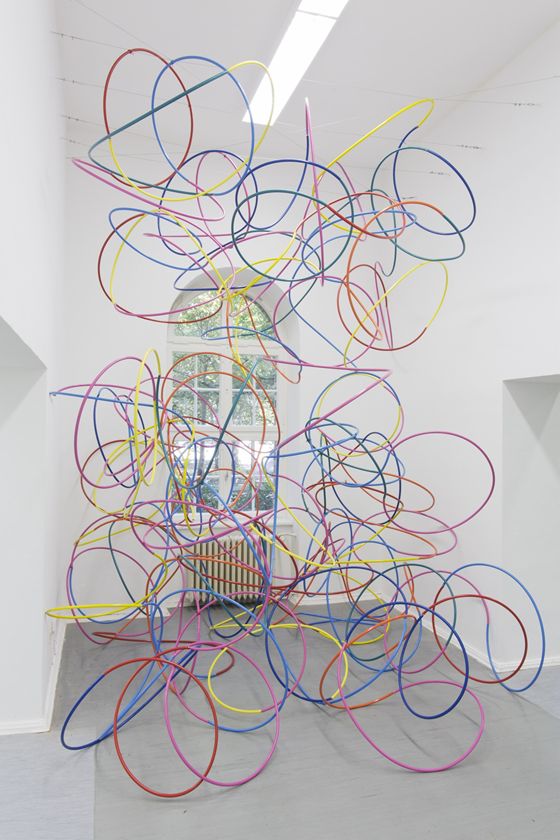 A Knight in Shining Armour

The everyday material Toshihiko Mitsuya uses has very different qualities from Hula-hoops. Fragile and shiny stands his knight made of Aluminium foil in the exhibition. A material that could be a symbol for modern society and its dubious handling of waste and natural ressources. Made to preserve for a limited time period and then to be thrown away, aluminium is very problematic in terms of decomposition and requires a high-energy-production. Through the use in every-day life and its small prize, its foil-form does not normally strike the eye as very beautiful or precious. But here it looks different. It is a cheap material and easily torn apart. Peculiar to the touch though. Apart from its cultural label it is a strange element. Familiar to everyone but, by handling it with care, Toshihiko Mitsuya transforms it into a valuable object, to be treated as it was made, with care and affection. The sculpture seems to be heavy and light at the same time. The knight, hero and rolemodel of childhood-days makes his work easy to acess, and speaks in an universal language. His installation of 300 small aluminium-foil sculptures, that were all based on various cultural backgrounds, won him 2010 the Okamoto Tara Award. 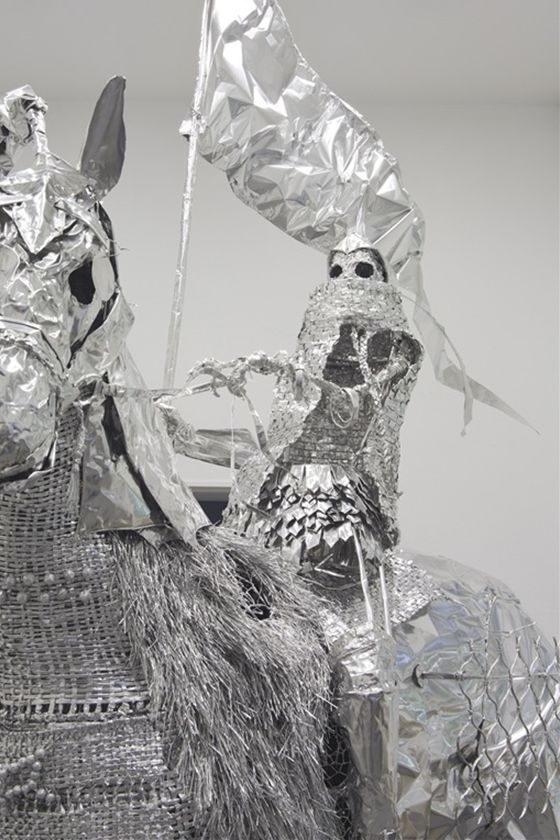 Only a little taste of what is yet to come

“The Echo – Although I am still alive” leaves an Echo indeed – a lingering thought that the artists participating have a very unique voice and are waiting to be heard. I could get only a little insight in what diverse artistic production contemporary Japanese Art has to offer, but we can hope that future exhibitions will show us more. There are numerous promising artists here and I am already curious to see what they are going to think of next. 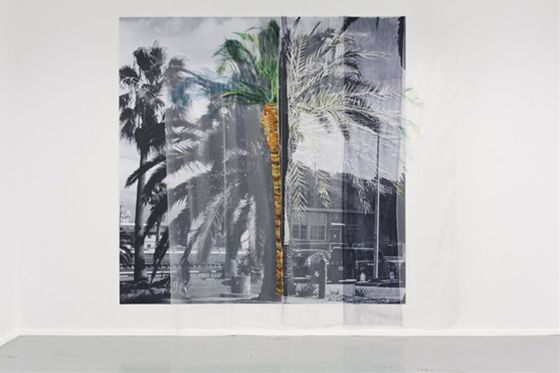 Work by Ichiro Isobe. A bucket hung from the ceiling. 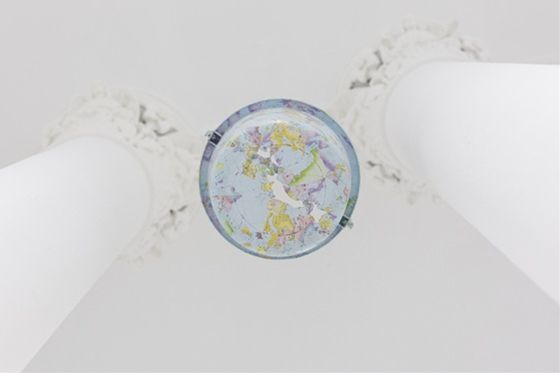 Work by Ichiro Isobe. Viewing from the bottom of the work. Shape of Japan is cut out.

All photos by Shinji Minegishi

Tags:Exhibition
0
Share:
Hiroshi Fuji “Where have all these toys come from?” at 3331 Arts Chiyoda
Interview with Tatzu Nishi, “Nakanoshima Hotel” at Osaka Canvas Project