At a first glance, it is hard to tell how Yuko Someya’s work was created. It may look like a painting but actually a collage of papers cut out or torn. Her work stands out not only for its dynamic structure, but for its details such as hand written patterns and textures of paper. She talked about connections or relations which have been changed since internet came to our life. 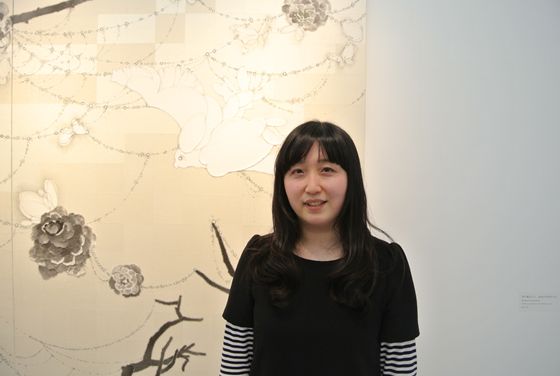 Yuko Someya standing in front of her work. 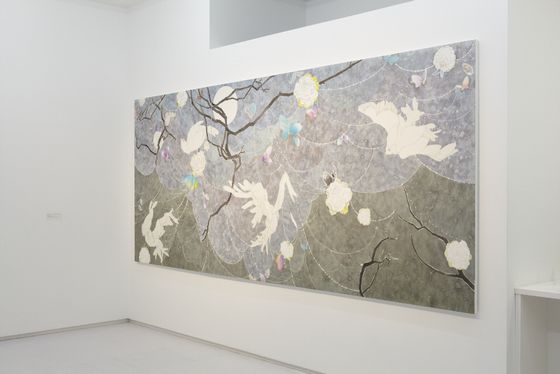 Breathing at rest with tears behind, 2012-2013 (c)Yuko Someya
Photo by Kenji Takahashi 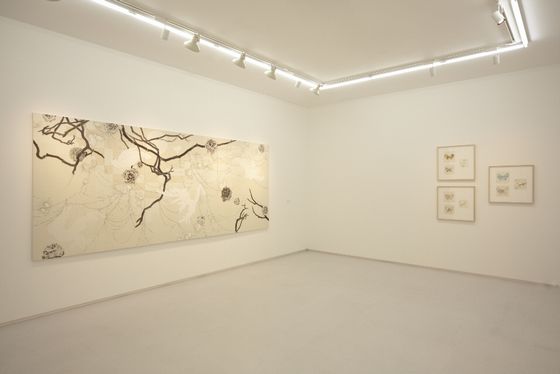 Breathing at rest with tears behind, 2012-2013 (c)Yuko Someya
Photo by Kenji Takahashi

-Can you tell us about how you create your work?

I don’t put colors directly on the canvas but cut out colored papers and bring them all together on the canvas. The paper I use is the one used for repairing print works. It is really thin and half transparent. 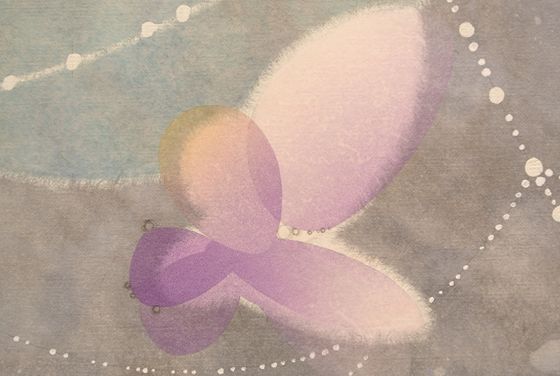 For example, in this part (above), I put a color on a plate and cover it with a very thin paper so that the color will transfer to paper. That is a technique brought from printing. Then, I cut out the paper and placed it on this large canvas.

Yuko Someya “Breathing at rest with tears behind”

Yuko Someya “Breathing at rest with tears behind”

-“Breathing at rest with tears behind” was created in a same composition but a different colors. Why is that?

In my process, I use forms to cut out paper sheets which are in the same size as the final one. So technically, I can make exactly the same work by using those forms repeatedly. On the other hand, I majored lithograph in my college and that experience influenced me to create two same works. I wanted to create original work and not as an edition.

-Although you majored lithograph, why did you start to cut out papers?

It may sound weird but I found myself not good at printing, hahaha. After flipping over the printed sheet, I noticed that I had prepared the original pattern in an opposite direction. Planning printings in mirror symmetry was hard for me. So, I made up my mind to work closely to myself.

-“Closely” means that you wanted to see how your work is like throughout the process?

Yes, however, I liked to use the tools and enjoyed the steps of printing. I wanted to work more directly but I didn’t want to leave printing methods and go back to painting which I did until majoring lithograph.

-How was printing different from painting?

In printing, there is no lively vividness which painting usually has. Printing is more flat. There is a distance between the viewer and the work. I like the distance that the printing method has. 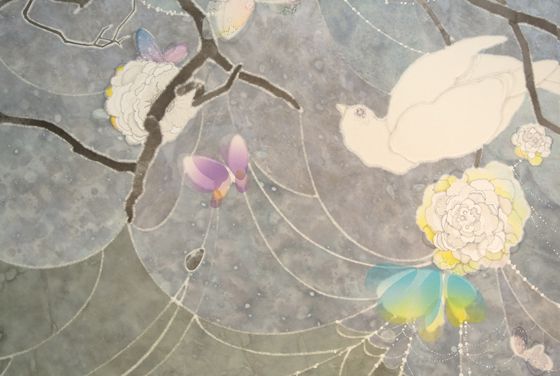 Close up look of “Breathing at rest with tears behind” 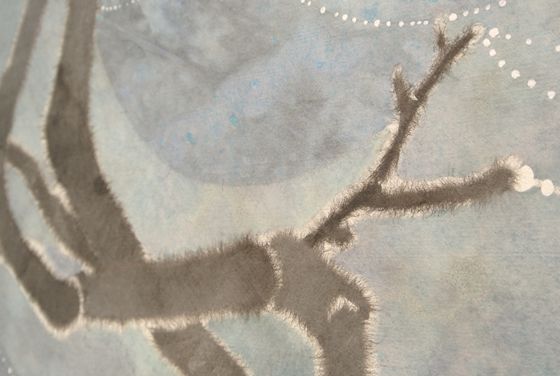 Details of the brunches which consist of torn black paper.

-When I first looked from apart, I thought this part (above) is a black water color penetrating into the paper. But it actually consists of black torn papers!

Right. I use many kinds of paper in my work. The character of fibers differs on each paper. 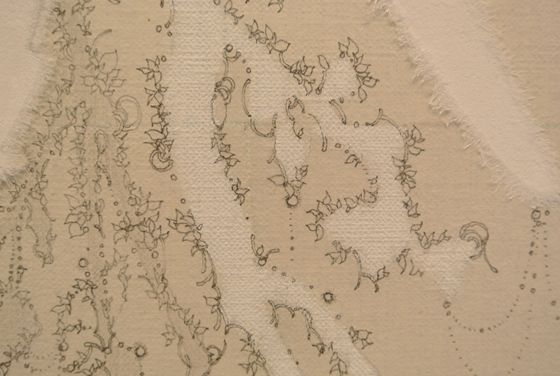 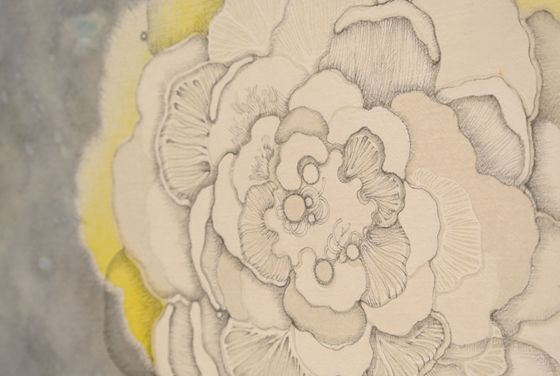 Details of a flower of “Breathing at rest with tears behind”

-There are sensitive hand drawings in some part of your work.

I draw these drawings in the end. It is more like working with my intuition compared to the other processes. It is important to consider how the work looks from far apart especially in a large work but I also wanted to make a part which you can enjoy when you get close.

I try to change the impression which the viewer will have when they see from apart and get closer.

Each butterfly has a detailed appearance or character in my mind 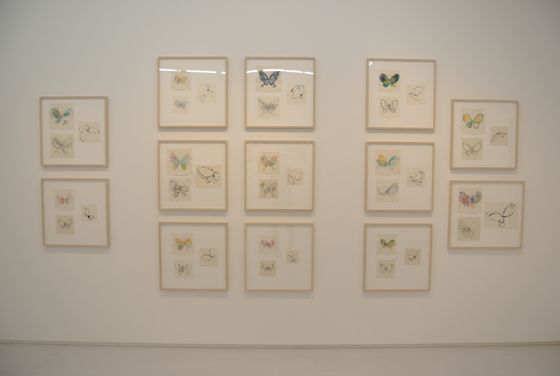 Butterfly drawings done for the preparation of the large work.

-Can you tell us about these butterfly drawings?

These are prepartions for the large work. Each butterfly in the large work has a detailed appearance or character in my mind. Every butterfly was first drawn like this. Among the three, the one on the right side can be seen in the large work. There are 23 types of butterflies in the large work? and each drawing was exhibited at the exhibition. I used to draw these sketches just for myself but this time I made it up as my drawing work by organizing it in one frame. 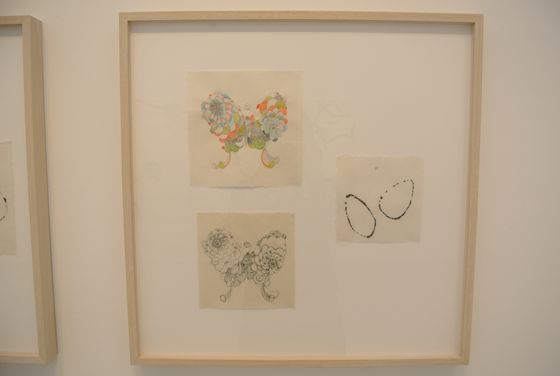 -Is it all hand drawn? It looks like a copy since it looks exactly the same.

Yes, it is all drawn by myself with a pencil. I draw it on a very thin paper so I can trace the first butterfly to draw the next and re-shape or color it. 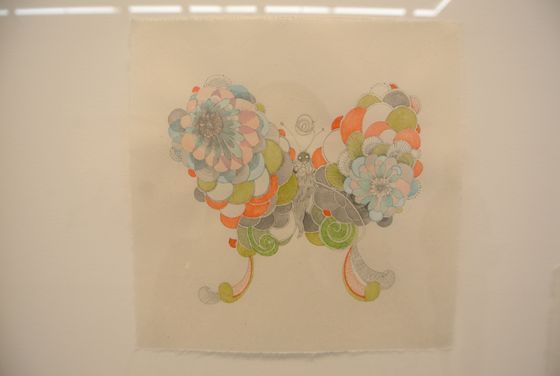 Close up look of one colored butterfly.

This butterfly (above) was drawn when I was thinking about this year’s animal symbol which was snake, during the new year season. 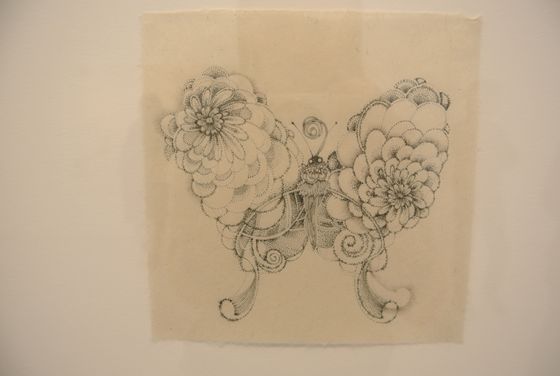 Close up look of uncolored butterfly. 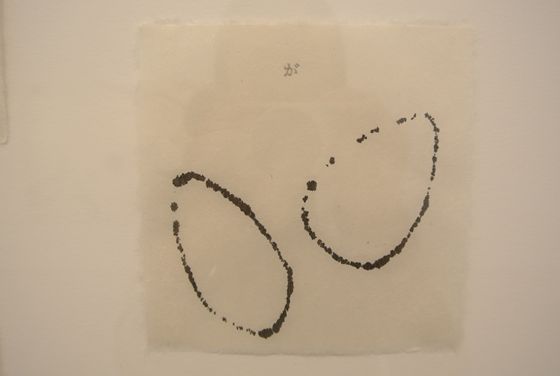 The final shape of the butterfly which was used in “Close up look of one colored butterfly.”

It is like; one butterfly is thinking “I want to go away” while another thinks “I want to stay here” or “where should I go?”

-How did it come from? Can I ask what you were thinking when you were working on this work?

I was thinking about connections or relations deeply at that time.

I think it could be seen in any generations, but there are some unprepared relations in our life. For example, someone may know your phone number unexpectedly or you can be connected to anyone through the internet unconsciously. The information which looked like a beautiful one may suddenly become colorless or valueless. 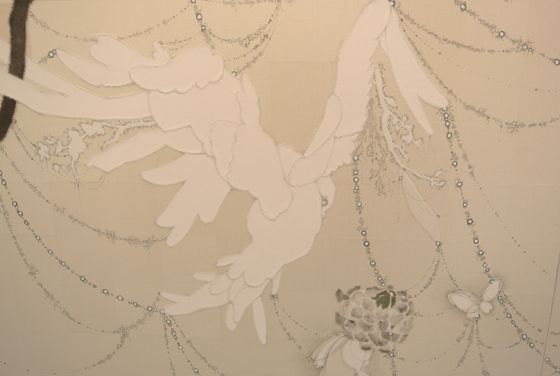 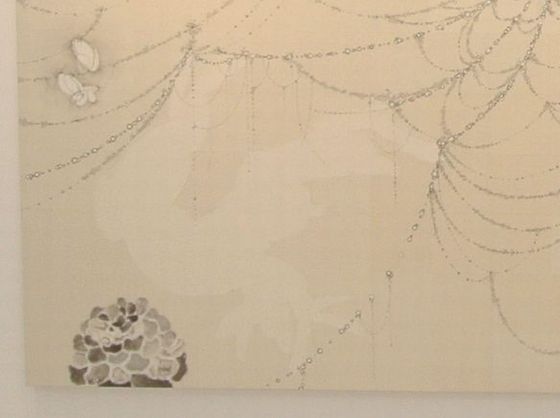 One bird has flown away and its space is left.

We are all captured in the web unconsciously and hard to get out of it. In the black and white version, one bird has flown away (above). There is a blank left in that space. I let it released from the connections.

Animals and plants don’t speak. They may be going ahead. 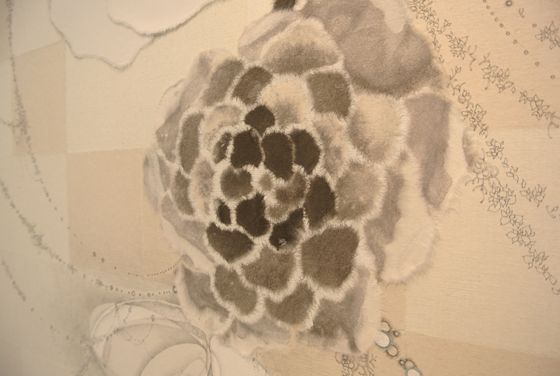 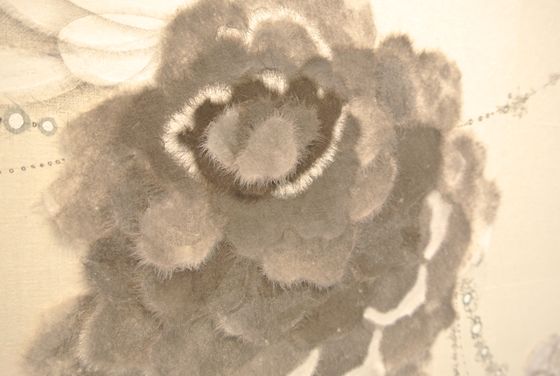 -Why are there many animals and plants in your work?

I think it’s because they don’t speak. Human beings have the largest brain along the evolution and communicate with language. From my point of view, animals chose not to have languages. They don’t need a language which we still need. They may be going ahead of us.

Responsibility matters to work as an artist

-How did you get interest in art?

I guess my experience in my childhood was important. There were many sketches drawn by my father placed in the shelf. I was really moved by seeing them and dreamed to draw like that.

After entering the art college, I was lucky to be surrounded by my great colleagues. They were eagerly thinking about art and I felt ashamed of myself just drawing for myself without any deep thoughts. Then, I start to work more seriously.

-What is different for you to be as an artist from just creating art?

Responsibility matters to me. Nowadays, it is easy to express one’s word on the internet. Compared to internet, books are published by going through the checking and screening process. I enjoyed those words coming out with full responsibility. To do something with my name contains responsibility. There are many people including gallery staffs help me out to show my works. That is why I thought I should work seriously.

While I was in college, I used to work only with my intuition. After considering to be a professional, I start to think of the structures or compositions much deeper as well as using my senses.

-We can see your responsibility through your hard work. Thank you for your time.

Tags:Interview
0
Share:
Kohei Nawa talked about his studio managent
Bringing the power of nature into ceramic: Interview with Takuro Kuwata