Artist talk titled “Artist studios today” by Kohei Nawa, Yusuke Komuta and Naoki Tomita was held at G-Tokyo. As we may imagine as a typical artist who works lonely in a? studio, their styles are not like that. Nawa’s studio works as a team to solve problems and respect each abilities to overcome any difficulties. Other two young painters have opened a new space last year and looking for their new way as a creation space. 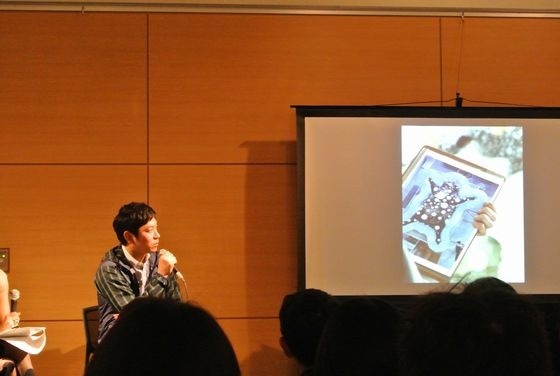 Kohei Nawa talked about his studio “SANDWICH” which opened 4 years ago. He renovated an old sandwich factory into a large studio space all by himself with his friends. Since some of them had other jobs on weekdays, they spent weekends to plan and renovate the studio. They didn’t even have a toilet, air conditioner or gas at the beginning.

The studio was first used to create art works but after they officially started up the studio as SANDWICH they also began to use the space to photo shoot Nawa’s work or to plan the exhibition presentations. The foundation of the current team structure was build up then.

SANDWICH is a place where companies and interns come and go

Nawa said it is now the time to try anything new. There are many companies which visit his studio to show their engineering or materials to be used in his work or presentation. When he was younger, he wrote letters and walked around companies to ask to cooperate with his work, but nowadays, companies are visiting him.

The studio is not equipped with large mechanics but they would borrow it from outside facilities according to their need. In this way, they can have an extra space even when the studio is full.

Their techniques are very unique, so that his work could only be created at his studio. Nawa and his staff work hard to think of a better way to create a work and to maintain the quality. Even for a project in a small island where there is not enough materials, they think hard to get through any difficulties.

Compared to ULTRA factory led by Kenji Yanobe which is a studio for students at Kyoto University of Art and Design, SANDWICH is placed outside of the university. He aims to have connections with the society openly.

They accept interns from all over the world and fully utilize the residence program. The advantage of working at SANDWICH is that they can ask any technical questions to the staffs.

Team built up on human relationships

Nawa said he struggled how to manage the studio especially in the days before he moved to SANDWICH. He read many books about management and created operational schedules although it didn’t work well since he needed to instruct staffs most of the time. Later, he found that it is more easier to depend on people’s relationships.

As Nawa is a sculptor, he thinks technical staffs, materials and machnies are the core elements of the studio. And he suggested that it may be another idea that the artist him/herself becomes the transferable existence which moves around the studios all around the world. The world where artist brings the ideas and collaborates with local techniques.

Studio Kodai is a space opened by several young artists including Yusuke Komuta and Naoki Tomita last November. They had a concern that there is no space to work for the artist after graduating college.

Achievement could be realized in a long term instead of the years only in the college. In addition to that, there is no space where artists could get together. Most of them work alone. Tomita said he used to work by himself in his own studio but found that his life gets disconnected to the society unless he goes out intentionally and that was a crucial problem for him.

Many painters including Daisuke Ohba have their own spaces in “Studio Kodai”. Painter’s working spaces are physically closed so that they can concentrate on their works. Beside those creation spaces, there is a comunity space where residency artists can get together and talk. And that space is giving a value as they work as a community.

After listening to the structure of Studio Kodai, Nawa said that although it seems to be a closed working space so far, he thinks it will gradually be more open. In some point, they will start to think about the position of Kodai in the society and it will become a more opened space, just like how art develops.

I was surprised to know how SANDWICH has developed their own techniques and manages it to keep up the quality. It is just like a company works with many professionals. In addition to using manufacturing techniques aiming for the effective society, artist can change them into another object to allure people. “Artist studio” must be a space to see materials or technology from another aspect with brilliant ideas.