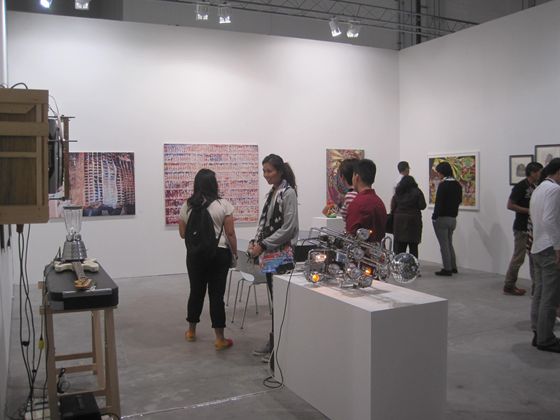 We Are Asia’, roared the ad campaign for the second edition of Art Stage Singapore, and Japan was not short on representatives at the island nation’s second attempt to establish itself as a vital destination in the Asian art scene.
The sophomore edition of Art Stage Singapore drew 133 galleries from 19 countries and a swarm of 31,000 visitors who flocked to Marina Bay Sands’ Convention Centre by the sea to see some of Asia’s most exciting works. The exhibition ran for four days, from 12 – 15 January.
Azito’s three partner galleries, NANZUKA, Yamamoto Gendai and Mori Yu Gallery made a strong showing as well. 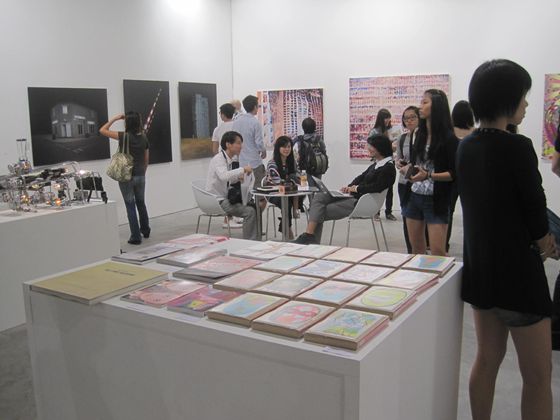 The combined NANZUKA, Yamamoto Gendai galleries saw a non-stop flow of visitors to their booth. 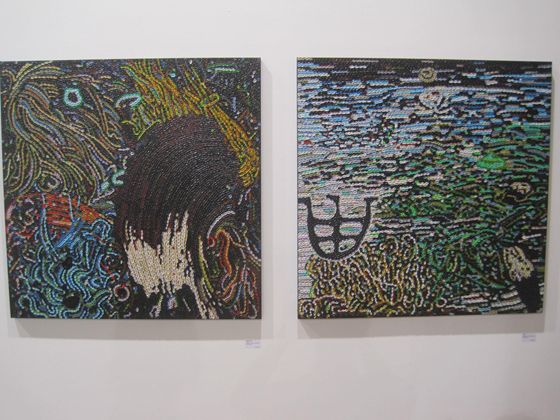 Hajime Sorayama. ‘Headbangers’ on the right, ‘Sleepers’ on the left, were colourful acrylic pieces 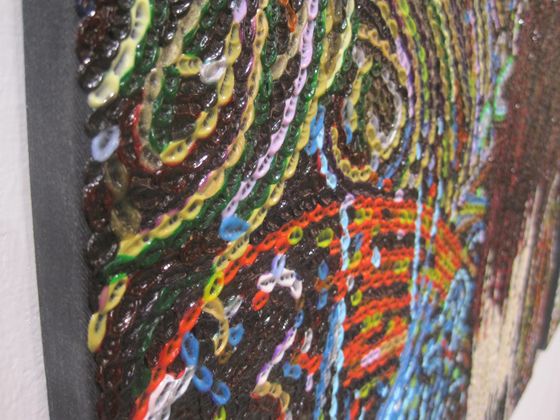 Close up of ‘Headbangers’. The meticulous work, crazy colours and movement made this piece one of my favourites in the exhibition. 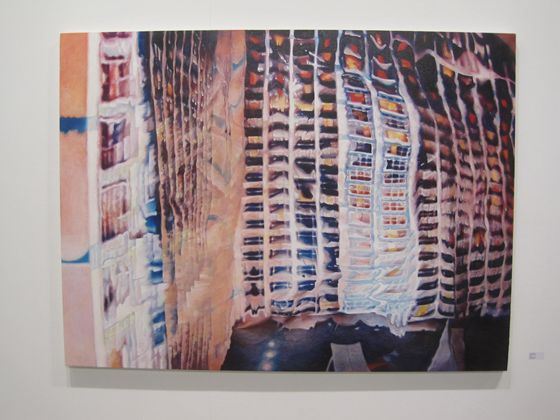 Kei Imazu’s ‘Off the walls’ was another instantly eye catching piece. 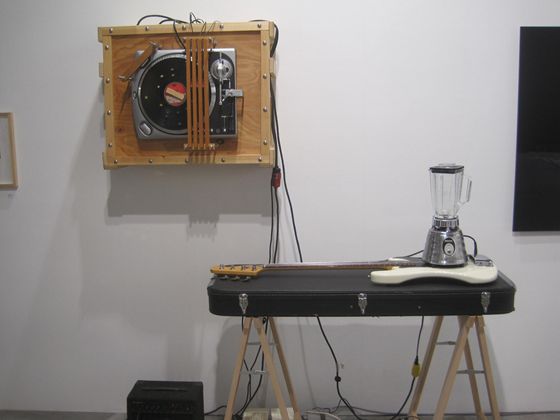 An installation piece by Muneteru Ujino at Yamamoto Gendai booth provided a steady rhythmic beat that became a ‘soundtrack’ at their booth. 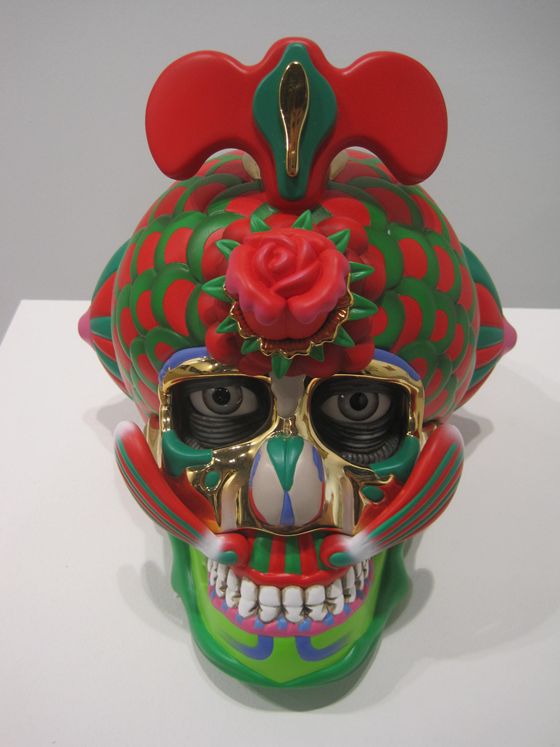 Keiichi Tanaami’s irrepressibly energetic works were on display as well, and here is his ‘[Superabundant existence]’

Another of Azito’s partners, Mori Yu Gallery, presented a more selective but visually captivating series of art pieces by the painter Sakae Ozawa. 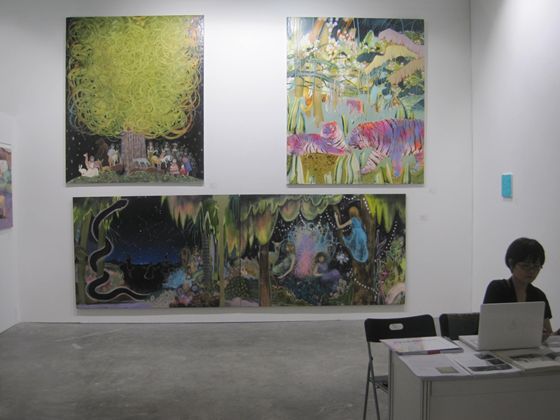 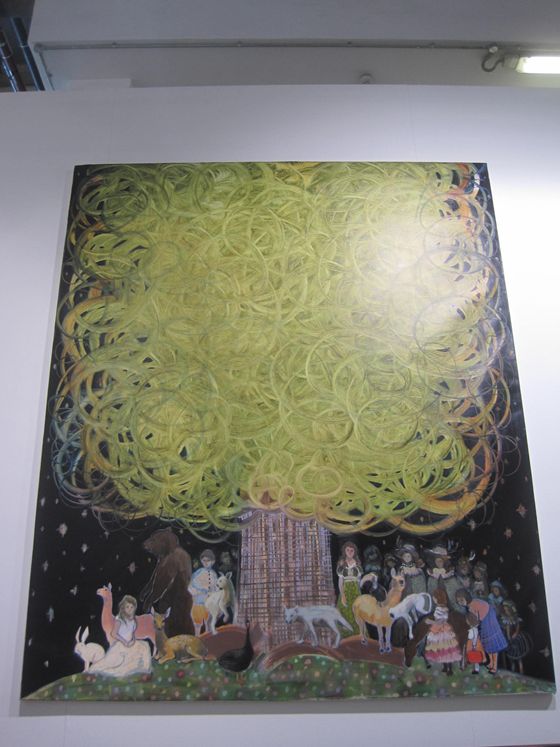 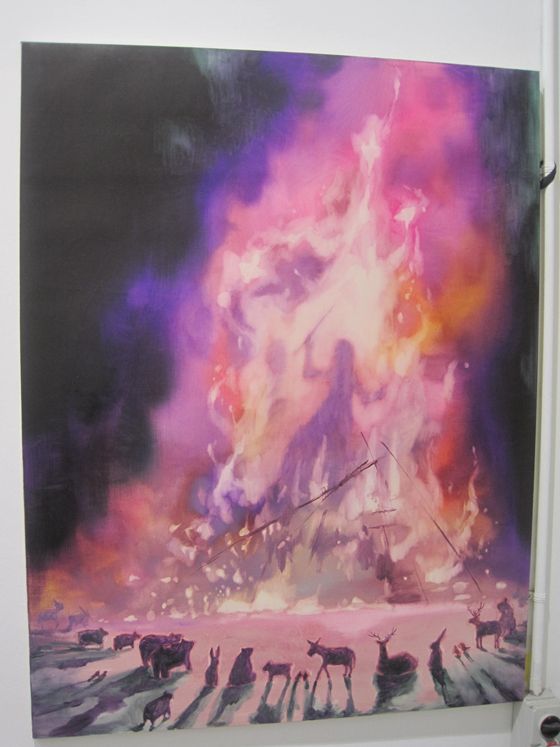 Besides Azito’s partner galleries, a host of other Japanese galleries also exhibited at Art Stage 2012. The art pieces on display at Tomio Koyama Gallery had a distinctly pop art sensibility to them, which was right up my alley. 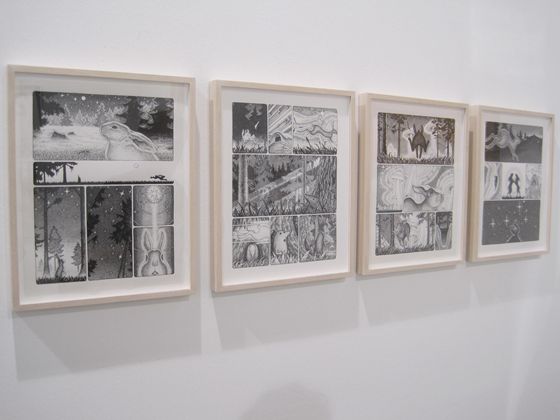 Atsushi Fukui’s ‘the meadow of bunnies’ 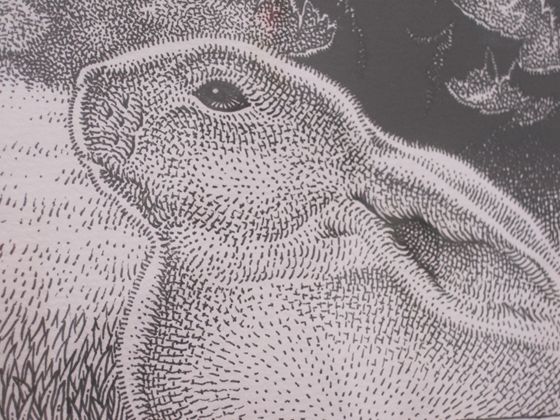 Close up of ‘the meadow of bunies’, ink on paper 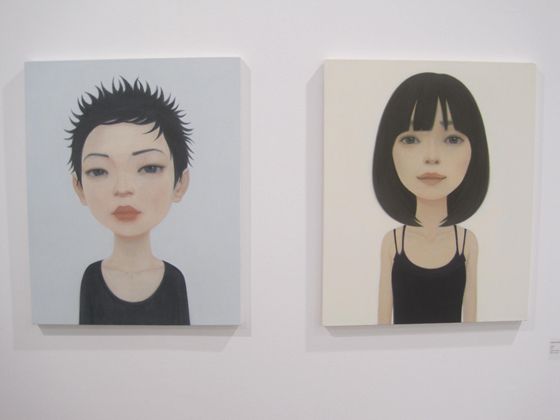 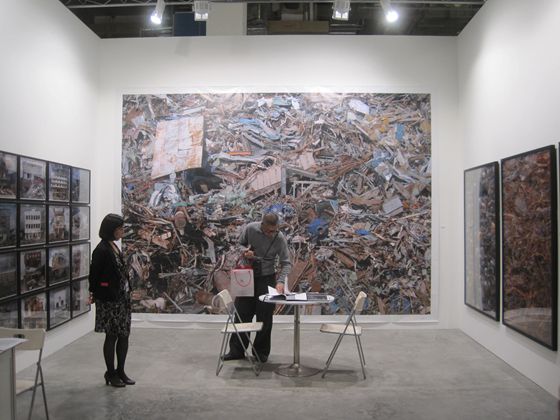 Hirohito Nomoto’s Façade and Debris prove that the catastrophe also pervaded the minds of Japanese artists. 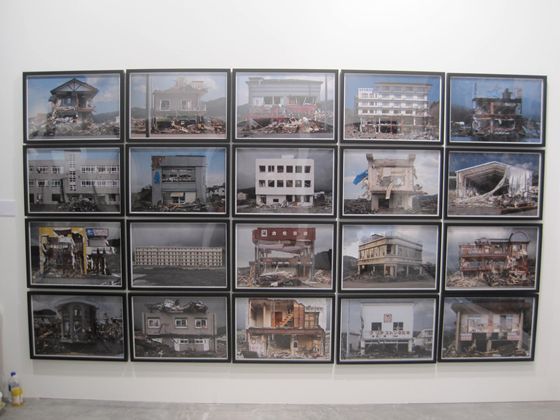 Hirohito Nomoto’s Façade is a montage of 20 photos capturing the facades of 20 buildings wrecked in the disaster during his trip to affected areas.

Ota Fine Arts’ exhibit was one of the few video installation in the whole Art Stage 2012, having brought in the work of Hiraki Sawa. The walls of its darkened, enclosed booth were used as a projection screen for two nameless films, while what seemed to be an old antique television ran a monochrome film on loop in a lit corner. 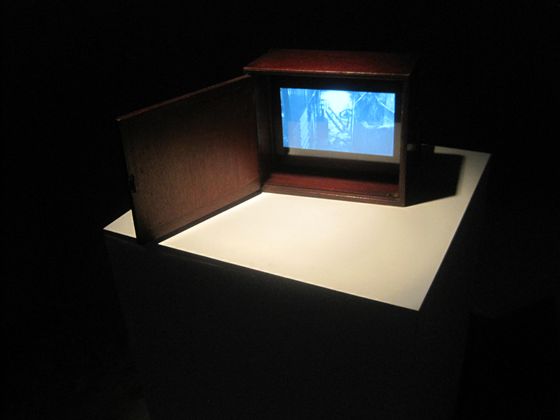 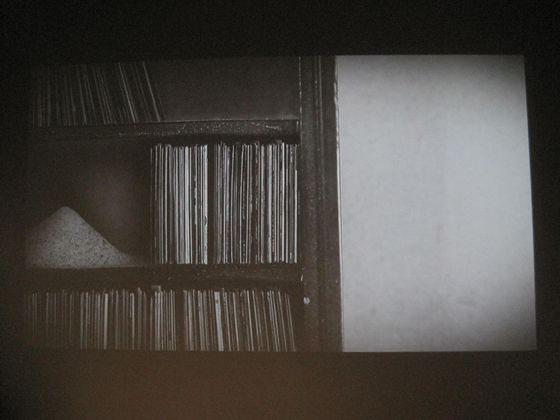 Still of one of the video pieces playing. In this section of the video, sand trickled down on the left hand side of the book shelf.

A favourite find of mine however, has to be the simultaneously cute and awe-inspiring wood statues by Yoshimasa Tsuchiya, on display at the booth by Megumi Ogita Gallery. 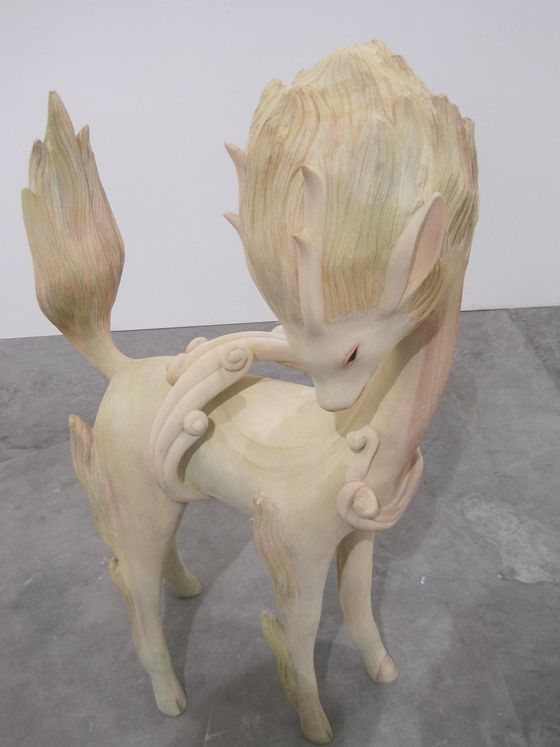 The 1.18m-tall ‘Qilin’, a mythical Chinese creature here re-interpreted by the artist Yoshimasa Tsuchiya, is both cute and elegant. Real crystal was embedded for eyes, and the artist used opals and other gems for the eyes of his other wooden statues as well.

The Yoshiaki Inoue Gallery also put up an interesting variety of pieces, including a comic strip that when looked at from afar, formed the portrait of US sex siren Marilyn Monroe. 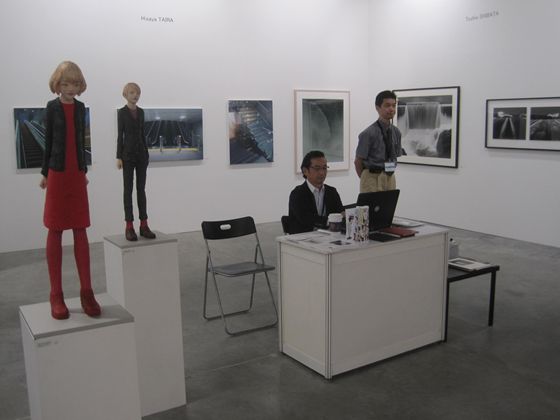 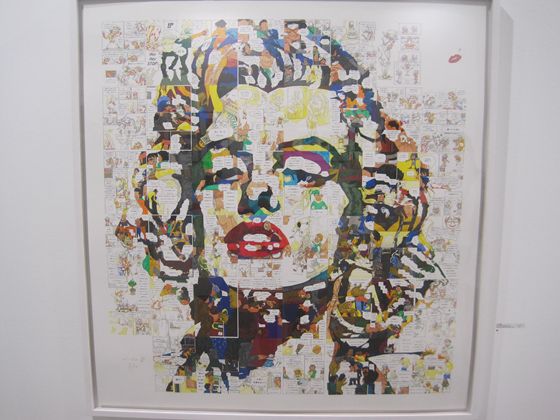 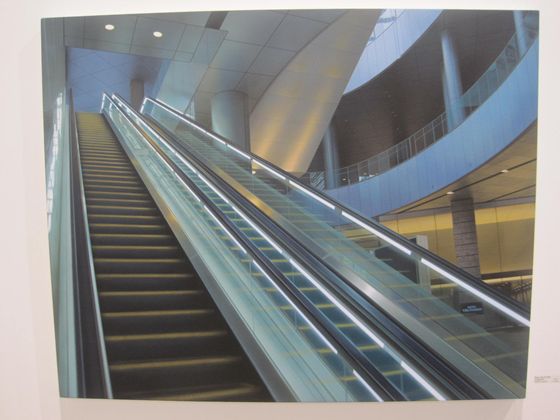 Hisaya Taira’s series of seemingly mundane ‘photos’ are revealed to be impressively realistic paintings upon closer inspection, which speak of the artist’s painstaking attention to detail. ‘Escalator#24′

Last but not least, Gallery Cellar put up a vibrant collection by the artist Tetsutaro Kamatani, whose vibrant photos were a joy to behold. 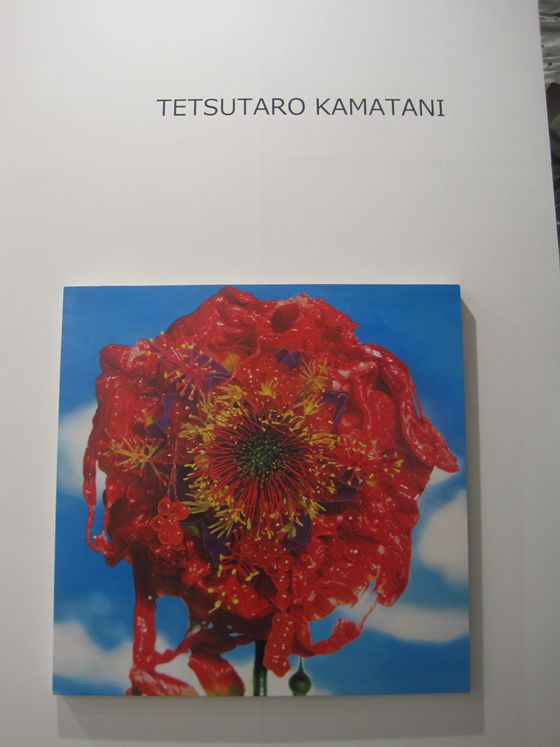 text and photo by Hannah Koh

Tags:Exhibition
0
Share:
“Fuyuko MATSUI: Becoming Friends with All the Children in the World” at Yokohama Museum of Art
Yayoi Kusama “Eternity of Eternal Eternity” at The National Museum of Art, Osaka