“Fuyuko MATSUI: Becoming Friends with All the Children in the World” at Yokohama Museum of Art

AZITO > Topics > “Fuyuko MATSUI: Becoming Friends with All the Children in the World” at Yokohama Museum of Art 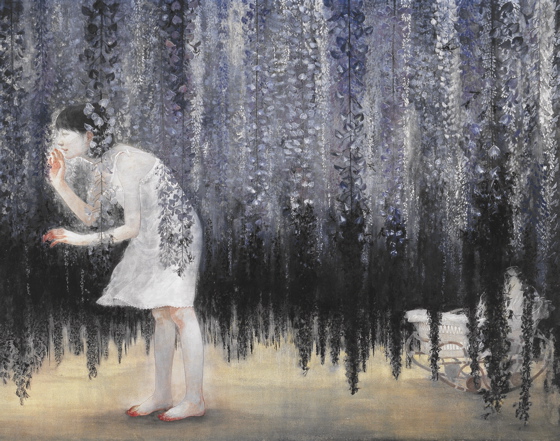 Posters of a hauntingly beautiful nihon-ga (Japanese-style painting) depicting a young girl who seems to be searching for something in a dense forest of wisteria while turning her back on an empty cradle appear all over the City of Yokohama and in trains on the Tokyu Toyoko line. The images are advertisements for Fuyuko Matsui’s solo exhibit at Yokohama Museum of Art.

While this painting appears to be a classical nihong-ga of a young woman standing among beautiful flowers, upon closer inspection, the gradational violet-colored blossoms are actually violent hornets and the girl’s delicate hands and feet are covered in blood; the painting actually portrays a dark and disturbing scene. The museum’s senior curator, Sae Yatsuyanagi, astutely points out that Matsui’s nihon-ga only “appear classical at a glance.”? Even more curious than the gruesome details of this very pretty visual is the cheerful title of the piece (also the name of the museum exhibit), which betrays the scary, sinister, solitary world portrayed in the painting: “Becoming Friends with All the Children in the World.” 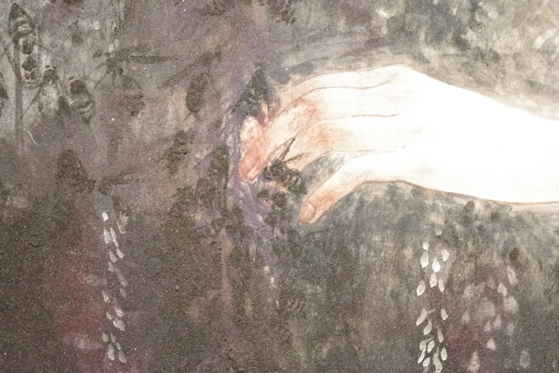 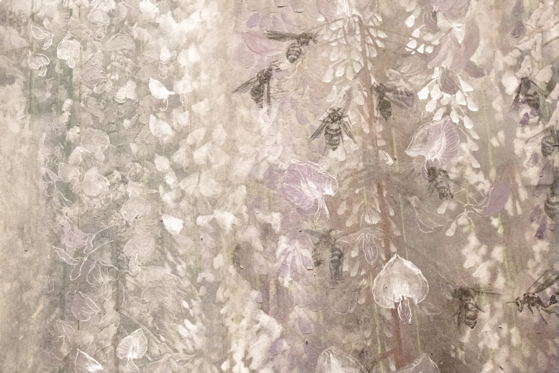 Fuyuko Matsui is a young female artist who received her PhD from Tokyo University of the Arts in 2007. As a young artist who has been selected as “woman of the year” by Japanese Vogue and whose current exhibit is supported by Rolex, she is unquestionably a hot, contemporary artist. However, she is also undeniably a nihon-ga painter. Her pieces are meticulously sketched, composed, and finished, adhering to the laborious process that culminates with the honga (completed work) on silk cloth. She acknowledges the necessity of this regimen for her work, describing how the nihon-ga methodology “demands unrelenting devotion to the process of learning and a belief that, without the limitations imposed by technique, nothing will be coming forth.” While her subjects and themes expose the extremities and depths of the human psyche, her painting style is calculated and every brushstroke is the result of scrupulous studies and practice.

The current exhibit also showcases underdrawings that reveal the artist’s efforts and trials to create the finished honga. Some of the preliminary underdrawings for the exhibit’s eponymous piece–which are collages of photocopied cutouts of the background flora, the female figure and the cradle–illustrate the girl peering into the baby carriage instead of away from it. Such variations of the painting tell us that the disturbing final image of the young girl wandering away from the cradle was perfectly coordinated by Matsui after considering other possible compositions. 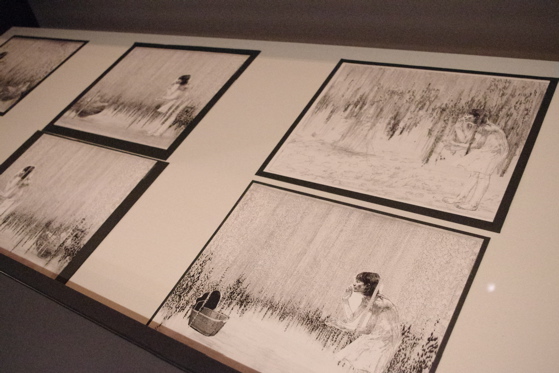 Underdrawings for “Becoming Friends with All the Children in the World” by Fuyuko Matsui (2001, collection of the artist)

“Components” is an entire section of the show devoted to demonstrating the stages of producing a nihon-ga. Sketches of insects, human anatomy, plants and dissections of animals are the necessary groundwork for Matsui’s final paintings. 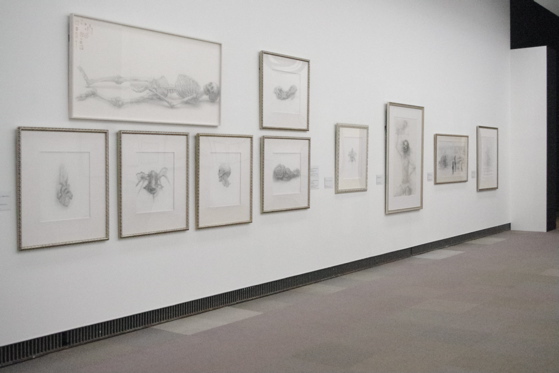 Sketches by Fuyuko Matsui in “Components” section of exhibition “Fuyuko MATSUI: Becoming Friends with All the Children in the World” 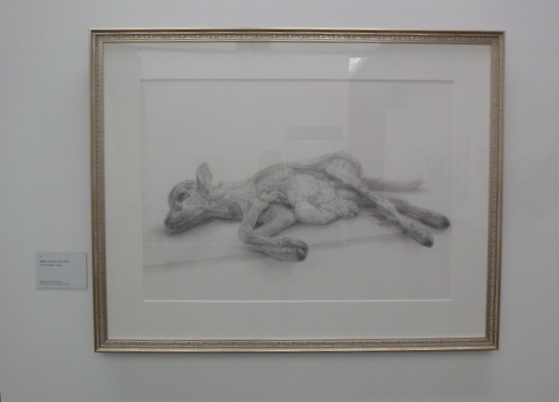 Sketch for “Veal Dissection” by Fuyuko Matsui (2010, collection of the artist) 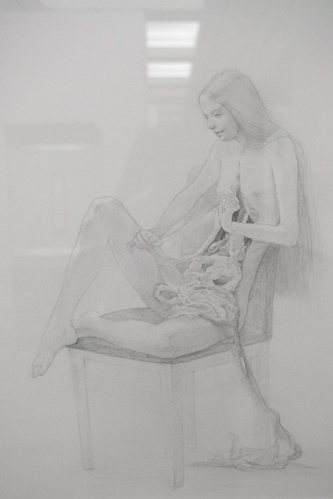 In interviews and her writings, Matsui has divulged that she only depicts female animals and women in her paintings, because her works are very subjective. She can only create what she understands. In her doctoral dissertation, entitled “The Inescapable Awakening to Pain, through Visual Perception via the Sensory Nerves,” she also admits that she infuses very personal elements into her work. We can also read from the title of her dissertation that the artist confronts the unwelcome yet inevitable realities of existence from which we usually avert our eyes. 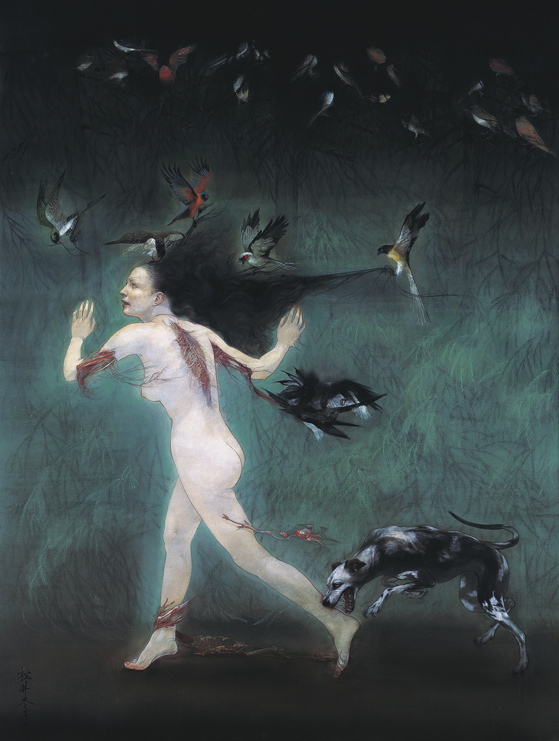 The three most prominent themes in her work are pain, insanity, and death. It is interesting, therefore, to see how she conveys such harrowing concepts through very feminine imagery. In “Insane Woman under the Cherry Tree,” a female figure stands with long strands of hair in her right hand and a breast in her left hand, while she regurgitates a fetus. In “Light Indentations Mingle and Run in All Directions,” a woman carries a fetus in her womb, along with a skull. It is tempting to read into such symbolic images, but Matsui provides context and clarification for her paintings by placing explanatory placards next to many of her pieces. In one of the show’s highlights, “Keeping up the Pureness,” the artist explains to her audience that the painting presents the state of being a woman capable of reproducing in contemporary society. Her fear-provoking works also act as “purifying agents,” which she creates to face and go through painful, terrifying experiences on behalf of those who may actually be in agony or in fear. 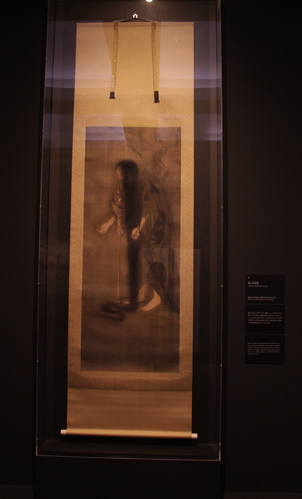 Painting “Keeping up the Pureness” by Fuyuko Matsui (2004, permanent loan to the Hirano Museum of Art) Photo: Yokohama Museum of Art 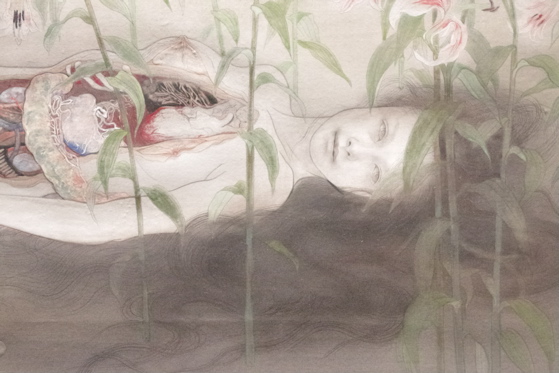 Detail of painting “Keeping up the Pureness” by Fuyuko Matsui 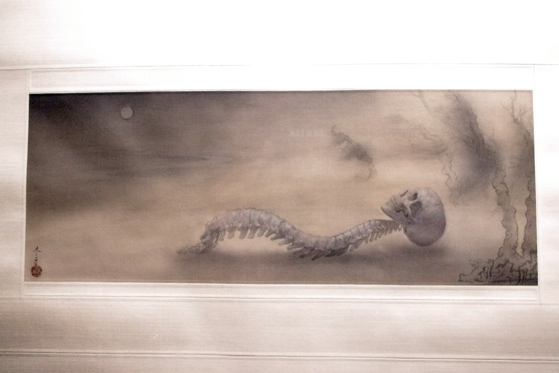 Painting “Unification of the Four Limbs” by Fuyuko Matsui (2011, collection of the artist) 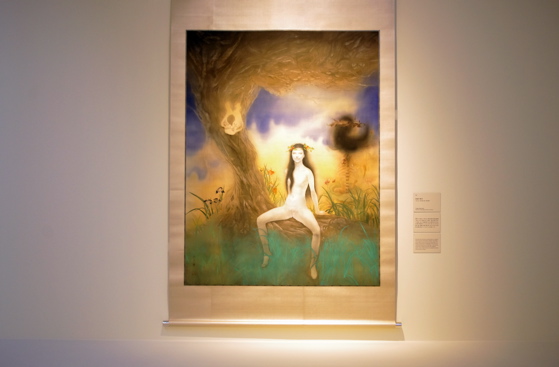 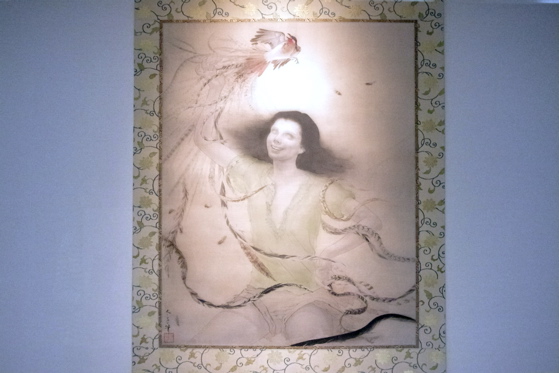 Painting “Place of Bodies” by Fuyuko Matsui (2011, collection of the artist)

Coming out of the exhibit, I felt like I got a glimpse of a very private part of the artist’s mind. However, the austerity of the nihon-ga production process seems to transform intimate secrets into carefully crafted messages. While the exhibition is full of what should be grotesque, frightening, and sometimes even depressing visuals, such negativity did not stick with me. As a woman, I came out thoroughly impressed by the young artist’s talent and her capacity to empathize with her own sex, and I reflected on my own life, looking forward to my own future.

text and photos by Makiko Arima