Kenji Yanobe “Until Sun Child Rises” at the Gallery of Ibaraki 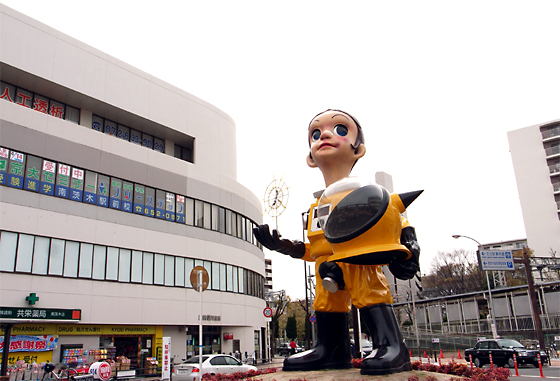 Sun Child by Kenji Yanobe, outside at the front of Hankyu Minami-Ibaraki station

On 11th March 2012, 6.2 meter (20.4 feet) tall FTP statue was unveiled in the central island of the rotary in front of Hankyu Minami Ibaraki station (Ibaraki city, Osaka). The day marked exact one year since the Great Eastern Japan Earthquake and Tsunami hit Tohoku and Fukushima Nuclear Plant Accident happened. A statue is called “Sun Child”, who is a young kid with bright big eyes in vivid yellow hazmat suits. It is the latest art work created by Kenji Yanobe and permanently installed as a new city monument to provide hope and courage to not only disaster victims but everyone in Japan. 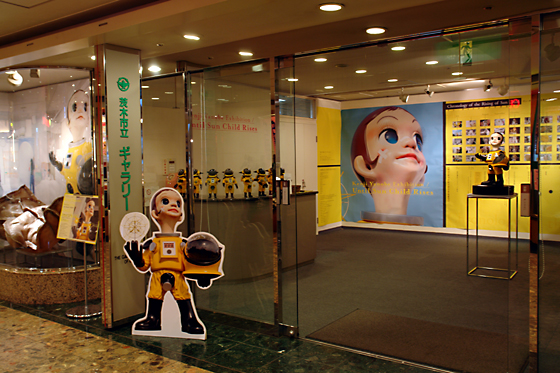 Kenji Yanobe was born and raised in Osaka. He spent his early life in Ibaraki city until his high school graduation. Yanobe said that his childhood experience in the site of Expo ’70 near his house have the great impact on his career. Little Yanobe visited and played in the site where dismantling was carried out. Leading-edge national pavilions had fallen into disrepair and only the Tower of the Sun designed by Taro Okamoto stood alone amongst them. He experienced a vision of “ruins of the future” there. Such a background made him aware of theme of “survival in modern society”, eventually issues of nuclear disasters. 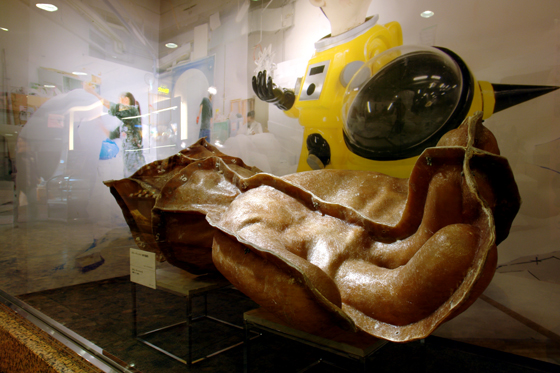 Mold of the right hand, Exhibition view of “Until Sun Child Rises” at the Gallery of Ibaraki

After 3.11 2011, as an artist who has been dealing with nuclear energy problems for long years, Yanobe soon began wondering “what is there that art can do?”, “what is it that we should be making now?” and “what is Kenji Yanobe going to be making from now on?” He discussed these matters with students of Ultra Factory which is a special hands-on training program directed by Yanobe in Kyoto University of Art and Design. He has worked out an idea of the monument that could “convey, in a straightforward manner, a message that would open up the way to the future.” Through early sketches and models, what would become the Sun Child was being formed by him and the team in Ultra Factory. 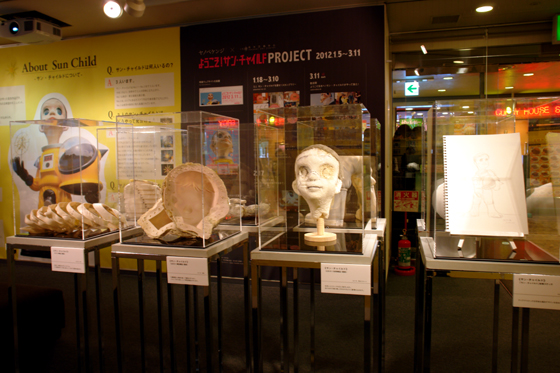 Sketches, Molds for one-tenth scale model, Exhibition view of “Until Sun Child Rises” at the Gallery of Ibaraki

This time a citizens group in Ibaraki decided to initiate Sun Child project to encourage city people to develop an intimate connection with artworks. Of course, readers of AZITO are already familiar with Yanobe through our several past posts about him and his works. Yet most citizens of Ibaraki still know little about him. Exhibition “Until Sun Child Rises” was organized to introduce his previous activities, future project and fabrication process of Sun Child mainly for residents. Unlike the usual contemporary art exhibition, visitors of all ages, both female and male, came up to the venue and heartily enjoyed the show. Sun Child seems to have aroused people’s strong interests now.

Early sketches for Sun Child, Exhibition view of “Until Sun Child Rises” at the Gallery of Ibaraki 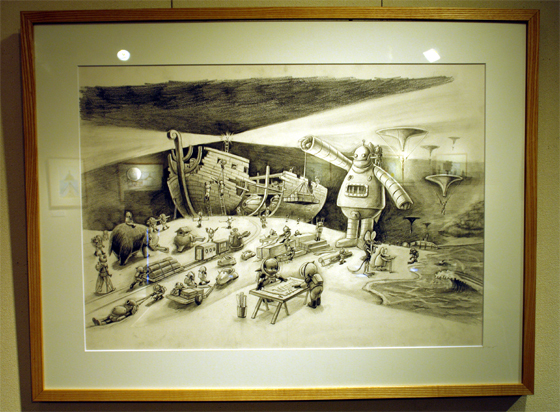 Sketches and drawings from Sun Child, project of “Temple of the Sun” and Torayan series were also on display. In sharp contrast to provoking installations and mechanized artworks, Yanobe’s cartoonish drawings are warm and gentle. They will bring a smile to any faces. 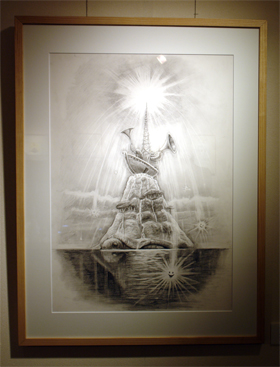 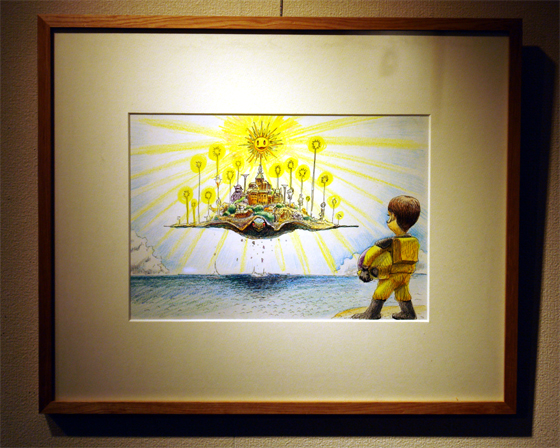 This drawing is original image source for the installation of “Tarayan’s Great Flying Ark Project Workshop” at Fukushima Prefectural Museum of Art in August 2011. For the closing of this exhibition, he and participants to the workshop, families, students and museum staffs living in Fukushima, made 180 dolls float in the air with yellow balloons. The scene of Torayan’s ark surrounded with hundreds of yellow balloons was one of the most impressive spectacle of that year to me, though I’ve just seen it on museum’s website.? (view this workshop) 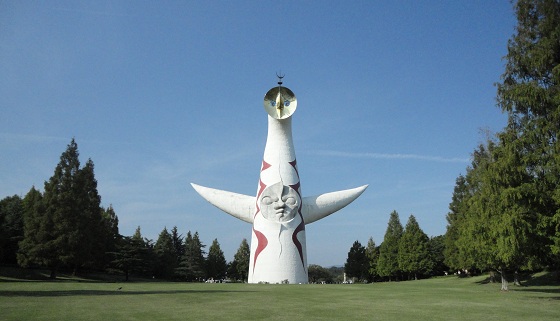 Ruins little Yanobe saw 40 years ago is not there anymore. Today the site of Expo 70′ is the thickly forested park. The Tower of the Sun will greet you anytime. 5 minutes ride on a monorail train from Hankyu Minami Ibaraki station where Sun Child is settled to Banpaku Kinen Koen station lead you to the Expo Commemoration Park.

Photo and text by Natsuki Niimi