“Hiroshi Sugimoto: From naked to clothed” at Hara Museum of Contemporary Art 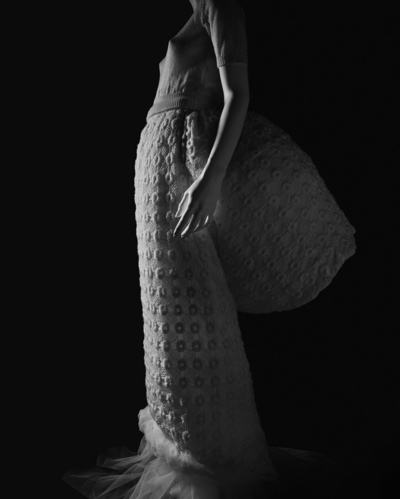 What’s wonderful about this exhibit by one of Japan’s most popular contemporary artists at a smaller venue like the Hara Museum of Contemporary Art is its intimacy. Hiroshi Sugimoto has drawn from his own private art collection, his iconic photographs, and his more recent forays in Japanese theater to tailor this small exhibition for this serene ex-mansion ensconced in the quiet residential neighborhood of Kitashinagawa in Tokyo.

One of the pieces used for the exhibit’s main PR image is from Sugimoto’s Stylized Sculpture series: a luminous white dress by Rei Kawakubo (of Comme des Garcons fame). With the image of such an avant-garde design representing the exhibit, the show is attracting a hip, and surprisingly male audience–most likely devoted Sugimoto fans. For such hardcore Sugimoto followers, the captions that accompany each of the pieces are an added bonus. They are full of personal anecdotes and the artist’s perspectives on fashion, eroticism, and cultural transmission (English translations available at the museum). 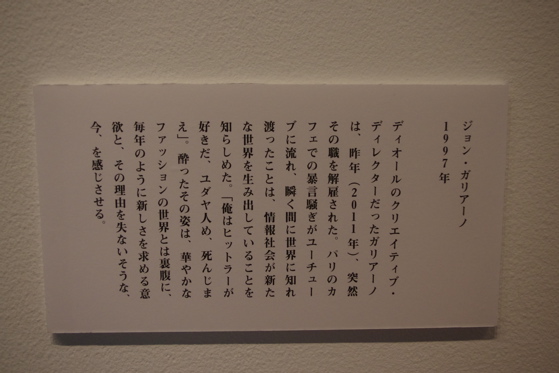 A caption for “Stylized Sculpture 011 (John Galliano 1997)” by Hiroshi Sugimoto (2007) makes reference to Galliano’s YouTube debacle that cost the designer his position at Dior. 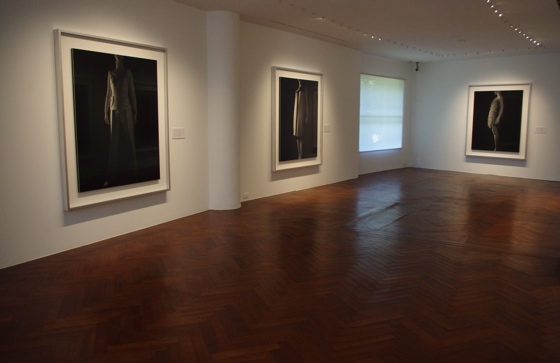 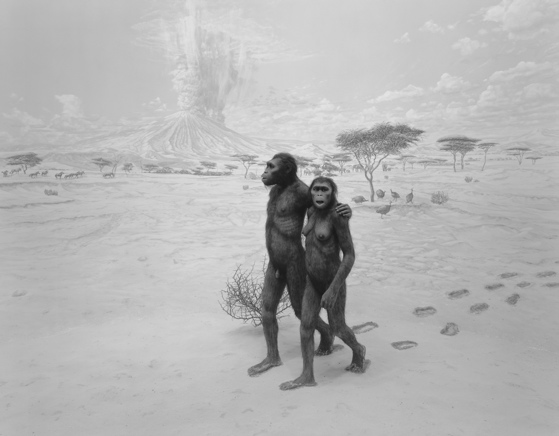 The first floor of the exhibit traces the development of clothing from Neanderthals (donning fur) to Yves Saint-Laurent (designing couture). The highlight here is “The Modern Age: Fashion branding” with selections from the artist’s Stylized Sculpture series. At first glance, the photos are simply shots of designer dresses. But Sugimoto has chosen and positioned mannequins to create a perfectly familiar but unreal setting, just as he staged the scenarios for his seminal Dioramas photographs. Appreciating these pictures requires us to readjust our mindset a bit. It is important to remember that these are not fashion photographs of models, but are imagined worlds where inanimate mannequins are wearing clothes and posing to be photographed by Sugimoto. 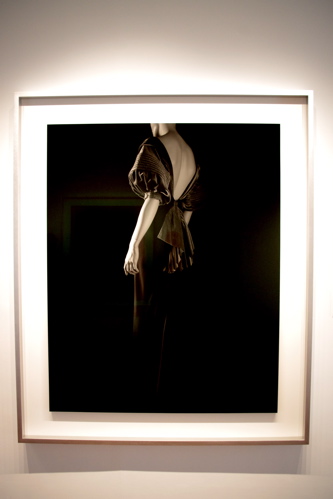 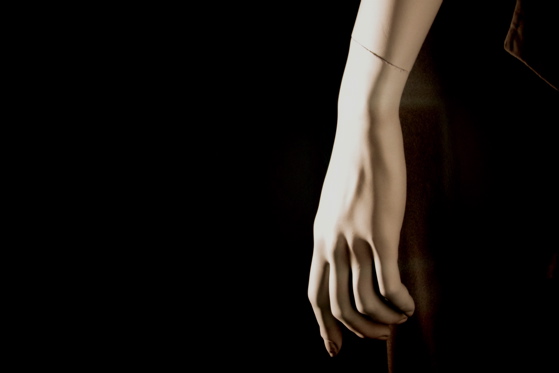 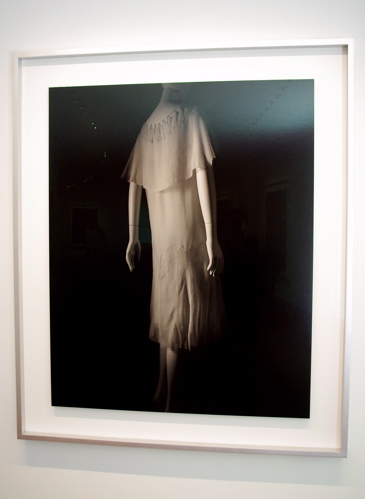 The Stylized Sculpture series continues on the second floor as “Japanese Brands Burst upon Paris,” with the emergence of Japanese maisons: Miyake, Yamamoto, and Kawakubo. In these photos, Sugimoto takes the same medium–women’s dresses–but the costumes do not emphasize the conventional (western) feminine figure as those downstairs do. Sugimoto, of course, understands the Japanese designers’ sense of aesthetics and take on women’s dresses. But he does not simply compare oriental and occidental stylistic differences. According to Hara Museum’s Junko Watanabe, Sugimoto also focuses on the mode in which clothing and the clothed are presented. 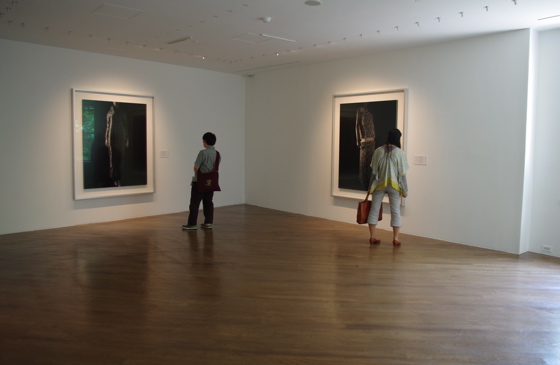 Gallery V on the second floor, part of “Japanese Brands Burst upon Paris” 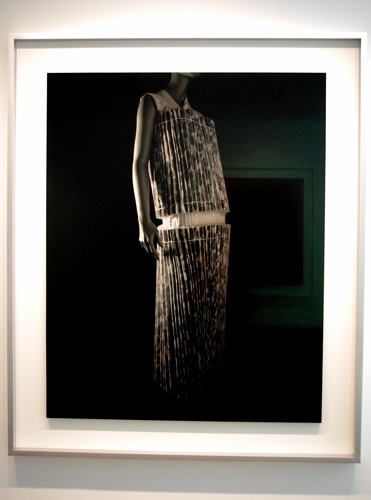 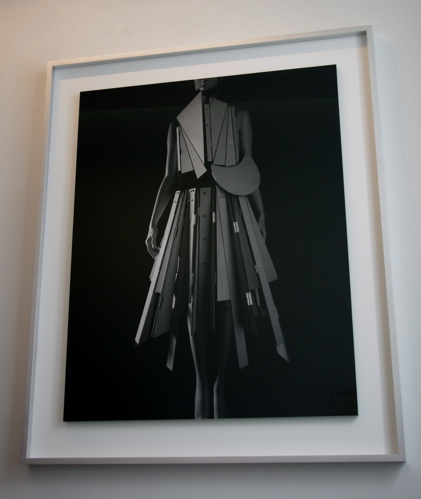 Sugimoto’s intentions in holding this entire exhibit, separating the western and Japanese designers, become even clearer if we consider the pieces in Gallery I on the first floor. In this first room that welcomes visitors, there are two pieces from Sugimoto’s own art collection: “Senninbari” by Chikatoshi Enomoto and “Ange anatomique” by Jacques Gautier d’Agoty. The former painting from 1936 is a depiction of three “modern girls” in Tokyo wearing the latest western dresses, but sewing red thread to contribute to a senninbari (thousand stitch), or a traditional amulet, believed to protect soldiers at war. Sugimoto points out that the scene illustrates “a premodern sentiment clearly at odds with the westernized image” of the trendy women. 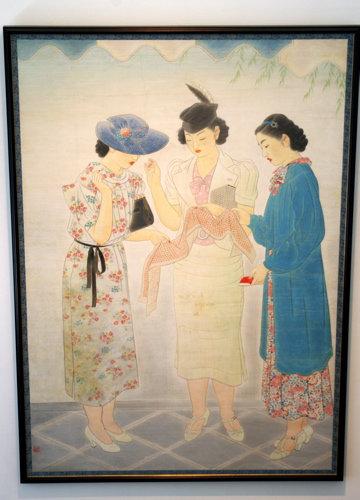 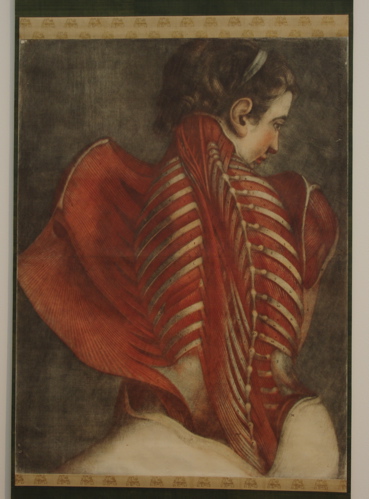 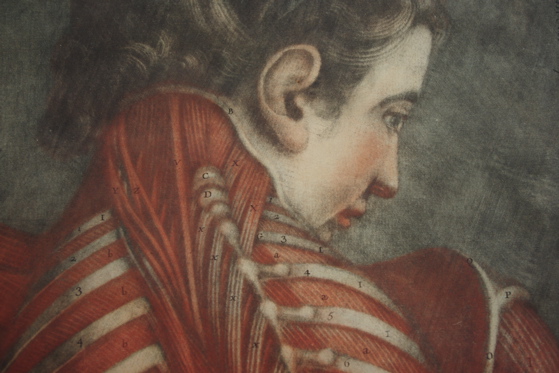 So it appears that it is not only clothes that distinguish the individual. A naked woman shedding her skin–literally–can exude the elegance and eroticism of a model wearing a very low-cut evening gown. Likewise, actions can betray impeccable attires and reveal cultural heritage hidden beneath chic shirts and skirts, as seen in Enomoto’s three girls.

Clothing itself, and not just the clothed, can also be deceptive. One of the most striking pieces in this exhibit is the puppet costume for Sugimoto’s Sonezaki Shinju, play from the 18th century. Sugimoto produced and directed this puppet play in 2011. The doll displayed in this exhibit adorns what seems to be a miniature Japanese kimono. But the garment is actually an Hermès scarf with prints based on Australian Aborigine paintings. In this case, the costume infuses disparate elements and yet appears familiar, as a traditional Japanese kimono. 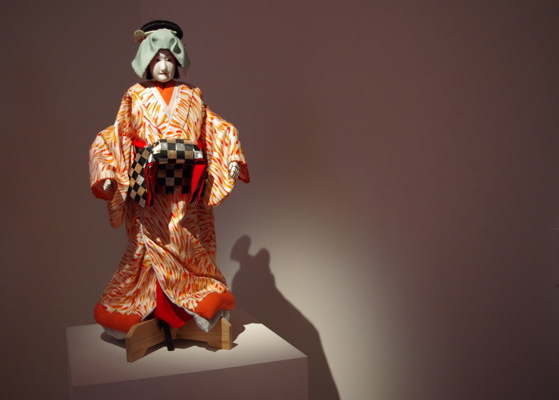 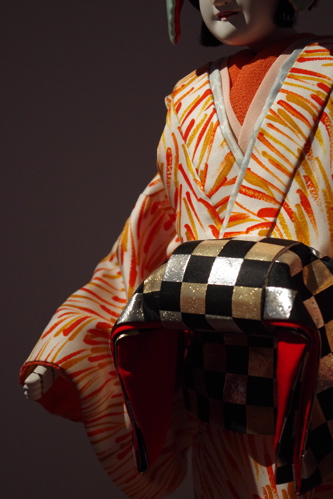 When visiting this exhibit, be sure not to miss the somewhat concealed piece, “Art Brooms (kaerinagaki)” outside of the sunroom on the first floor. This is an impromptu display that Sugimoto created with cheap brooms to hide an unsightly air conditioning unit in the museum’s yard. This ad hoc fence does not seem to fall into the larger theme of nakedness vs. clothing. Or does it? It certainly disguises and hides a bare apparatus that is functional yet embarrassingly unattractive compared. Perhaps this piece prompts the basic question at the crux of this exhibit: why do we cover up? 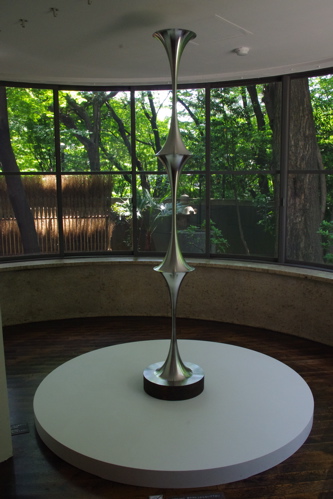 “Fixed Ration Negative Curvature Hyperbolic Rotational Plane” by Hiroshi Sugimoto (2012) in the sunroom, with a partial view of “Art Brooms (Kaerinagaki)” (2012) outside.

text and photos by Makiko Arima

Tags:Exhibition
0
Share:
Kenji Yanobe “Until Sun Child Rises” at the Gallery of Ibaraki
Interview with the organizer of Art Kyoto, Keigo Ishibashi