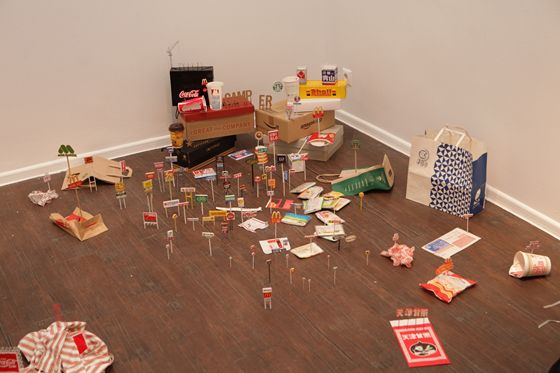 Insinuating the genesis and structure of the exhibition, the show is titled “Double Vision”. Two curators, in two venues of the Moscow Museum of Modern Art show two opposite trends in art: reality and fiction. Two poles that constantly seem to be depicted in artistic contemplation, but still do not fail to fascinate.

The first section, covering the ordinary world or reality, includes such names as Yoko Ono, Chim↑Pom or ?Kishio Suga, a vivid representative of the mono-ha movement (?school of hings”). This postwar movement, marking a major turning-point in Japanese art history, was formed in the late sixties. Kishio Sugas piece separating space shows the main characteristics in their quintessences. Unaltered material that stands for itself, composed in a new way by the artists hand to alter or question its traditional meaning. 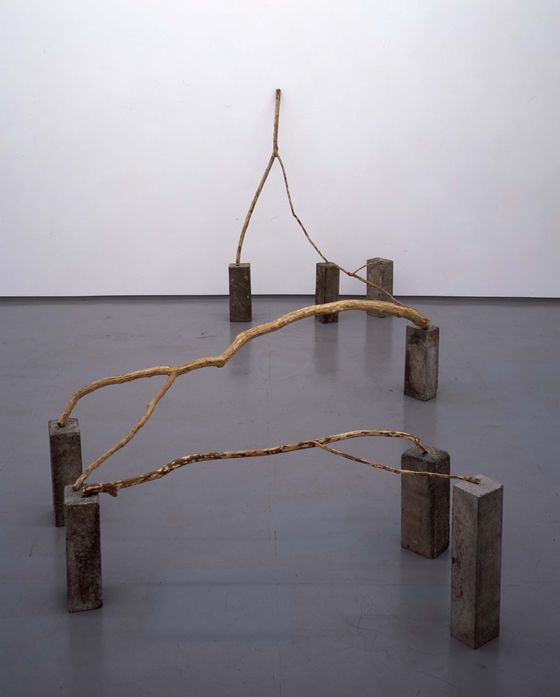 Yoko Ono’s famous Cut Piece can be watched in two versions, one dated in 1965, one from 2003. The videos show her sitting nearly motionless on a chair, inviting the visitors to cut her dress in pieces as they pleased.

The first section brings together artists that use art to reflect on their surroundings in different forms, this can be through use of material that has its origin in reality instead of an artificial one, or incorporation of the visitors as seen in Yoko Ono`s performance piece. Chim↑Pom`s miniature urban landscape though, haunted by an oversized rodent that has the same coat patterns as the Pokèmon Pikachu, shows that either section holds its fair share of fiction. 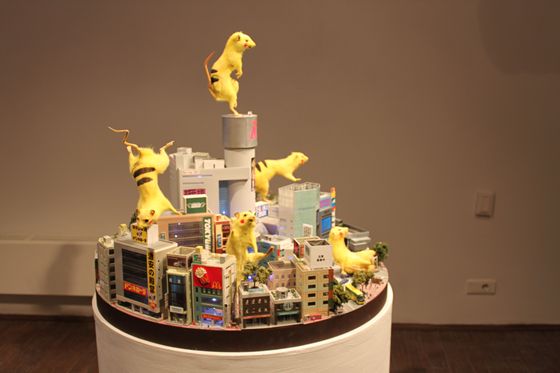 Artworks in the section imaginary world/ phantasms come in all shapes and sizes, the largest, being over 6 meters tall. Kenji Yanobe`s sunchild made in 2011, after the destruction of Fukushima, leaves the visitor with an eery feeling despite, or because of its toy-like aesthetics. 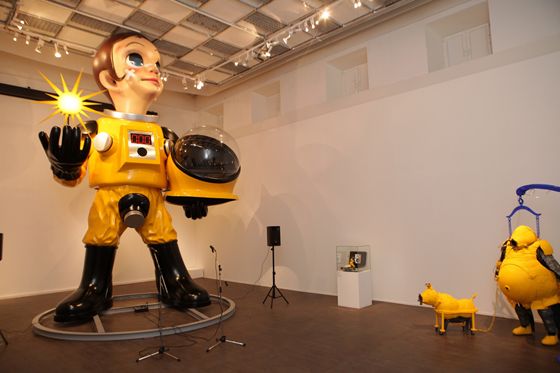 The yellow hazmat suit constantly reappears in Yanobe`s work – radiation, atomic energy and its accompanying danger being one of his main topics for over a decade. 1997 he actually visited Chernobyl dressed in one of his suits. 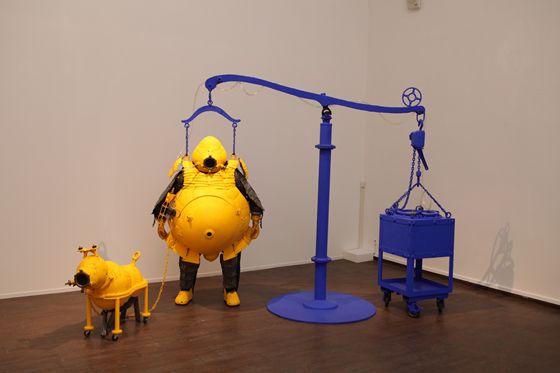 A similar use for objects resembling memorabilia from childhood days, is made by Takashi Murakami, famous superflat artist and self declared Otaku. Boundaries between commercial fields or everyday life and fine art become blurry when Murakami lets out his toy soldiers to climb a 2 meters high slab of yellow resin. Minimalistic in form, this is one of his rare explicitly political pieces, dating back to the beginning of his career in the early nineties. 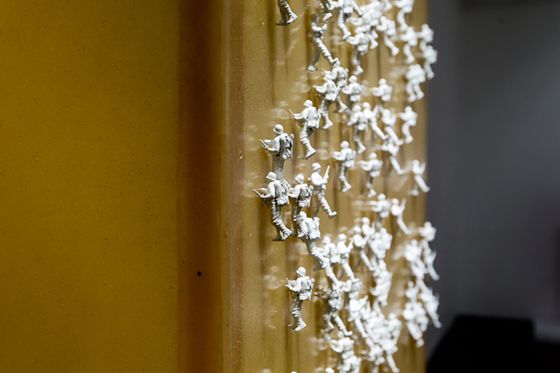 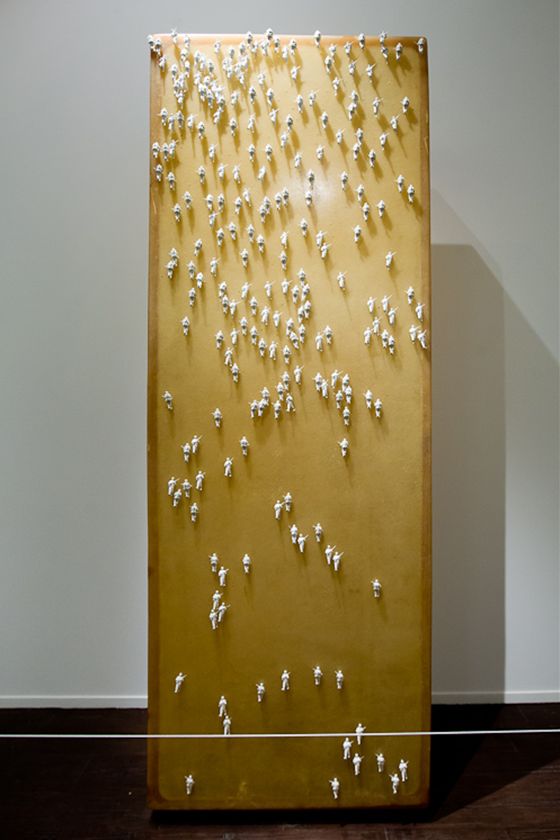 The fairytale language of Motohiko Odani can be enjoyed through a small installation, using mushrooms and butterflies to locate the scene in a disneyesk forest. The beauty sitting in the middle of it all, appears to reach out somehow to the observer, trying to move but being held by a metal brace around her leg. Although there is no actual sign of her being in pain or even discomfort, the scene evokes images of suffering and distress. 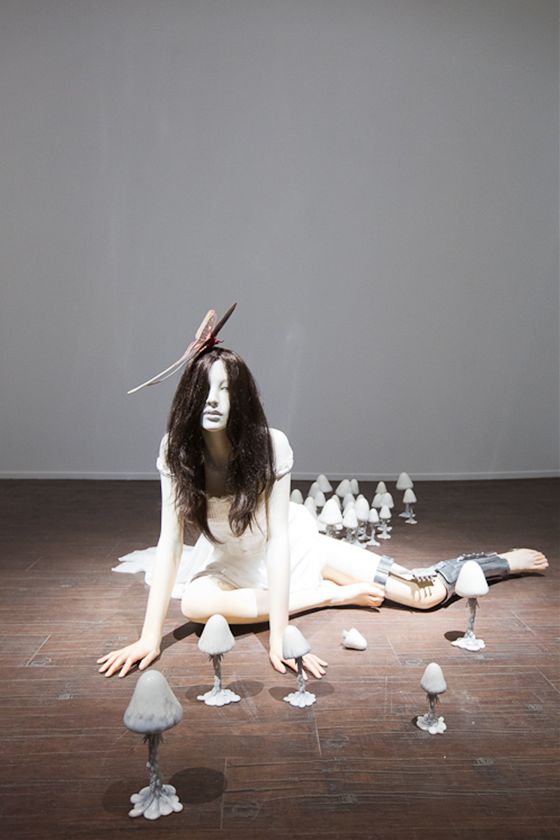 But there are also more traditional techniques exhibited at the Moscow Museum of Modern Art. Yoshitomo Nara or Izumi Kato are both shown by paintings of different forms and formats. Though similar in composition and motif the expression of their paintings is quite different. 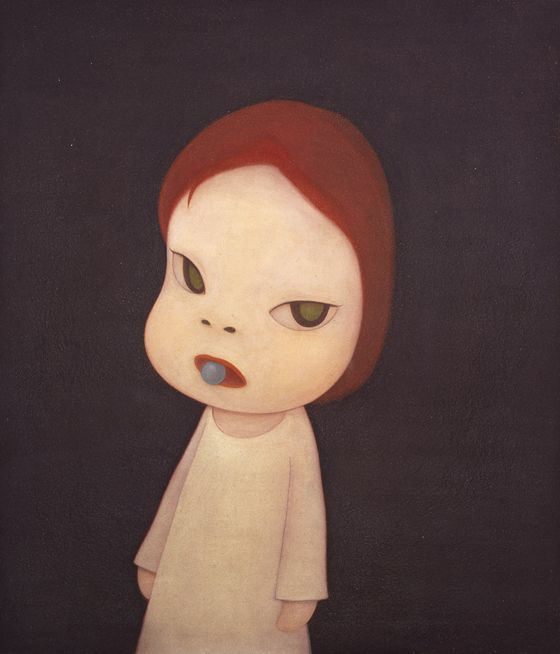 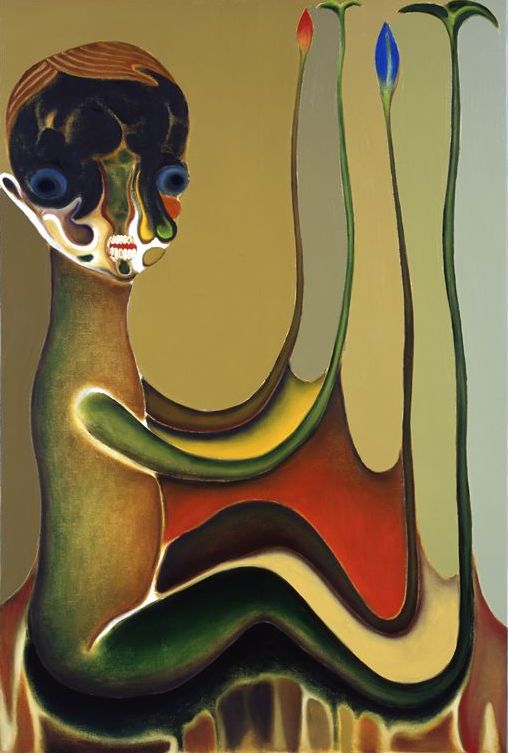 Nara`s clear and seemingly naive forms speak an entirely diverse language than Kato`s vibrant colours and blurring silhouettes. Both show human figures in pictures with an abstract background composed out of one or different colours.

The opposite, a spacious room without any anthropomorphisms detectable, could be a description of Yayoi Kusama`s work I`m here, but Nothing. A room, absolutely normal and in no apparent way outstanding on its own, seems to loose its distinct 3-dimensional character while being irradiated by bright disco-lights. The darkness of the room, in ?contrast to the intensity of the light-dots, transforms every surface that into a screen, a canvas for their colours. The room therefore becomes a carrier for a painting made out of light. By entering the room though, the visitor discovers that it was an illusion and that the light-dots are actually not made by a disco-ball at all but fixed on the walls, chairs etc. 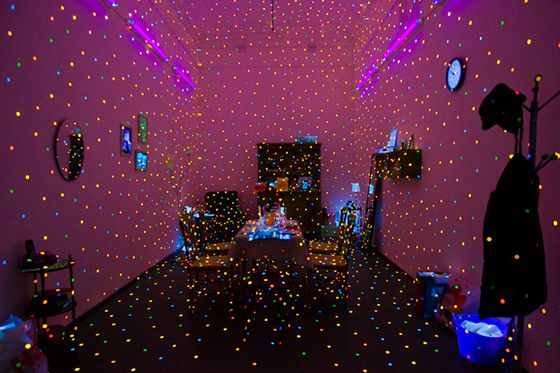 Yayoi Kusama “I`m here but Nothing” 2000, Photo by Victor Boyko

I think an exhibition with such a variety of different artists is always worth a visit. And it never gets boring either, the pieces awake curiousness for its details as well as ?impressions of monumental proportions, they tease and bewilder but never fail to touch!
For more see this video made by MmoMA: