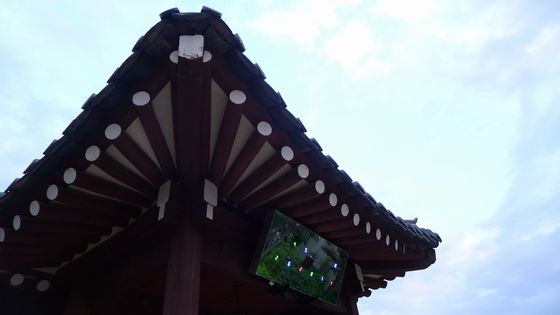 This time artist Tatsuo Miyajima joined efforts with hanbok- Korean traditional dress designer Kim Young-seok to open joint exhibition in an old Korean house situated in Gahoe-dong- historic district in Seoul ,full of traditional architecture, museums and galleries, a must see on every tourist’s travel itinerary. The house was built in the 1920s, it belongs to Han Family and has never been opened for the public before. Visitors may admire extraordinary architecture of hanok, mixture of Japanese and Korean style, while strolling around situated in a tranquil garden architectural wonder.
The idea for such exhibition was born after Kim Young-seok has seen the Han’s Family House for the first time and having in mind Miyajima’s previous works, especially Time Train ?exploring the meaning of time and its passing, designer thought showing Miyajima’s contemporary artwork in a traditional house space would be a perfect place to overlap two concepts of time. Miyajima himself was pleased about the project and after learning about Kim’s projects, wanted to show some of his works with Kim’s designs. 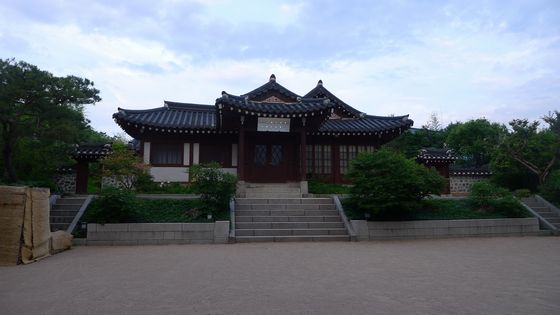 Tatsuo Miyajima ” Changing Time with Changing Self for K ” at Han Family’s House in Gahoe-dong, Seoul

Current exhibition opens Changing Time with Changing Self for K, a work installed on the façade of the house. It consists of LED situated on a mirror board linked with an electric wire. Miyajima has been constructing installations using LED digital counting devices since 1987. The installation shows us changing number sequences exploring further the idea of passing time and changing lives of individuals. Representation of time in its physical form is represented in Miyajima’s works by numbers, constantly changing numeral on the other hand, represent passing time, changes and eventually the infinite cycle of life. 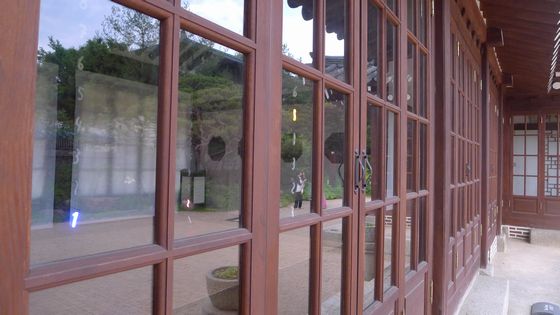 Characteristic for artist’s works are performative elements juxtaposed together with architectonic structures. ?Work Time Beads consists of LED numbers counting progressively from 1 to 9 or backwards. Noticeable Miyajima doesn’t use 0, establishing in such way continuity, a repetitive cycle reflecting life and passing of time. Numerals run at different speed emphasizing natural rhythm of individual living subjects. ?A brief stop between changing from 9 to 1 may also symbolize death before reincarnation into the cycle. 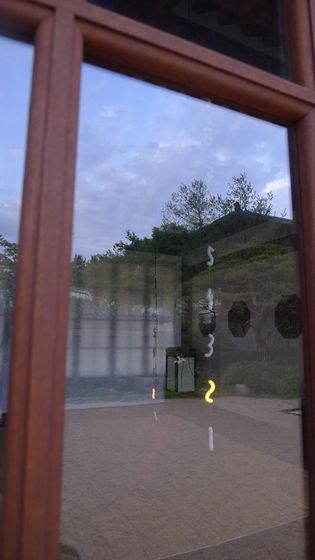 Artist in his works keeps exploring Buddhist concepts of changing, connectivity and eternal constancy. ?Those ideas go well with current space of the exhibition, which is almost 100 years old traditional house, where the old and the new come into even more visual and clashing interaction. This might be a good lesson especially for young people focused on technology, forgetting about the past and not conscious of the fact that those two can not only coexist together but also complete one another. 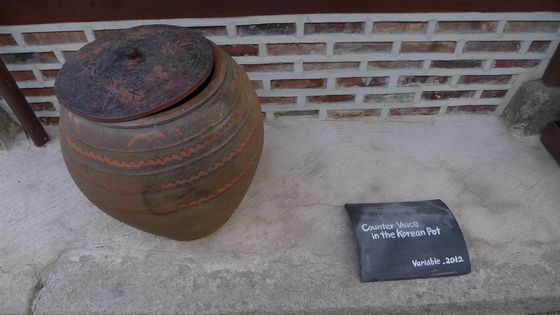 “Counter Voice in the Korean Pot” by Tatsuo Miyajima

On the roof of the concrete potting shed in the corner of the garden, a sound installation using recorded voices, Korean pots and speakers has been placed. This is Counter Voice in the Korean Pot. People of different sexes and backgrounds are doing a countdown in Korean, each of them expressing uniqueness of time in their own way. As we approach the corner of the house we hear more clearly mixed voices coming out of pots, all of them counting, each of them different, all of them sharing one space. Is it possible that such vastly diverse people could accept each other and overcome their differences? Here again artist reexamines concept of infinite life cycle manifested by endless repetition of numbers. 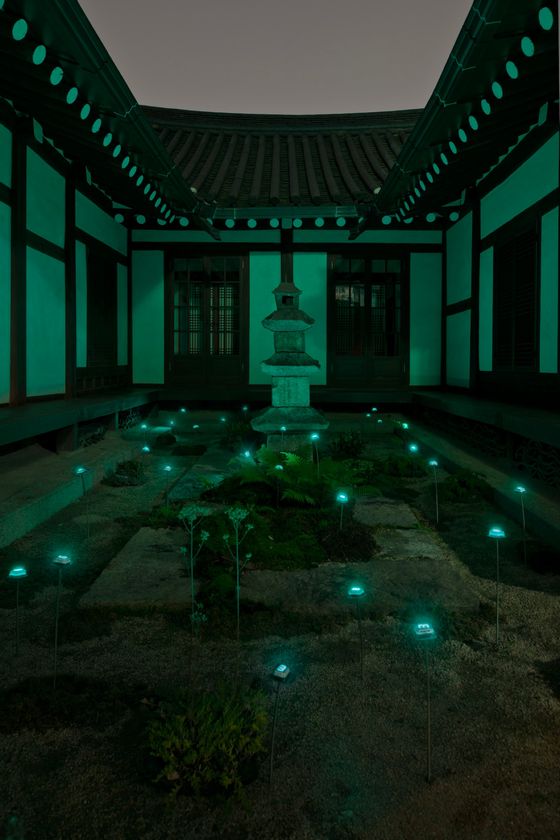 “Wild Time Flower in the Courtyard” by Tatsuo Miyajima, in night time. Photo by Nobutada Omote. 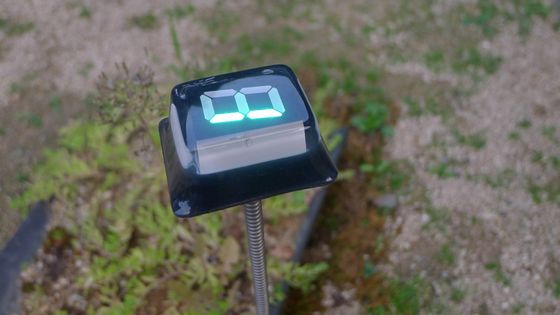 Wild Time Flower in the Courtyard might be the most impressive piece in this exhibition. Especially after sunset, green LEDs light up in a little stone garden like glow-worms, setting the mood for contemplation of history and time passing. Just as every person has an individual lifetime, so do the illuminated counting devices have their own temporal rhythm. Counting becomes a metaphor for an occupation with the basic question of human existence, with space and time, life and death. 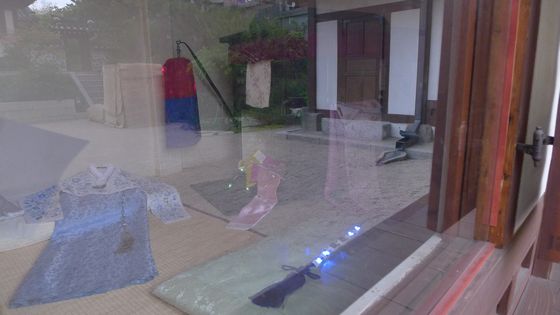 Combining LED and traditional Korean dress chima jeogori, artist enforces visitors to take a journey back in the past and reflect on history peeping through the glass window at Counter Chima Jeogori placed inside one of the pavillons. This is a way for artist to start dialogue with the public. Miyajima believes interacting with common citizens may be an effective way for creation of art. Counting is a method investigation and reflection upon significant moments in life, the same moments are experienced by every person, everyday. We constantly ascribe significance upon numbers, value them, but at the same time not being fully conscious of their meaning in universe. Numbers are figural and abstract at the same time and this raises some serious philosophical questions about them. 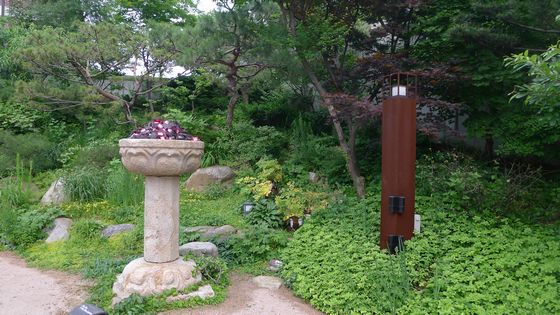 “Time Fire in the Garden Lantern” by Tatsuo Miyajima

Everything changes and nothing can be permanently fixed. The role of art is to accept and effectively show those changes reflecting reality in its own original way. As we entered a new era when art is no longer isolated from real world and real people, it should always look for ways of encountering the ordinary. And finally art goes on forever, art is immortal, it is a way one can experience immortality. House Lives with Time is a perfect example of such encounter.