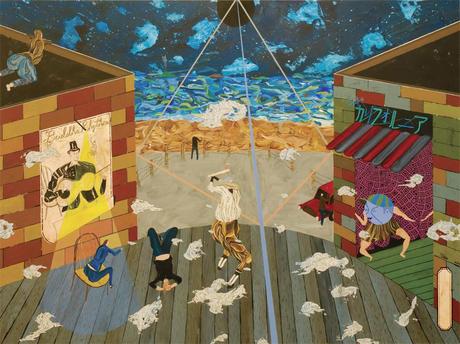 “From Kojiki to Modern Heroism” is a two-person exhibition of new paintings by the New York-based Japanese artists Tat Ito and Hiro Kurata. This is Ito and Kurata’s first solo show with the gallery.

As invoked by the exhibition’s title, the two artists draw from Japan’s earliest narratives to layer their thoroughly contemporary painting with a rich lexicon of visual and historical motifs. Tat Ito has created a unique pictorial style that combines high-color, graphic abstraction with echoes of Edo-era history painting. In his acrylic-on-canvas works, finely rendered scenes of court life, village squares, and columns of military figures are depicted from an elevated, detached perspective. Yet, jostling the picture plane forward and back are flat, decorative passages of Day-Glo grids, camouflage, and other graphic patterns. In the panoramic painting Kagutsuchi (“fire god” in ancient Japanese mythology), columns of orange-suited figures dodge explosions and atmospheric clouds of polka-dotted, Yayoi Kusama-style smoke. The artist describes this approach as “a metaphor for Japanese contemporary art and culture upon which the Western viewpoint is floating,” if not entirely mixing.

By contrast, Hiro Kurata presents an uncanny integration of East and West in his faux-naif, acrylic-on-panel paintings, whose prosaic subjects and settings carry allegorical undertones. In Greek Myth 09, a baseball player and a samurai-like figure go head to head with bat and sword. In the painting Death Match and a Novelist, sumo wrestlers on a seaside boardwalk are backdrop/muse for a seated writer/harlequin in the foreground. There is a distinct and breathtaking meld of art-historical influences in Kurata’s highly evolved style, from the contemporary New Leipzig School to Hokusai woodcuts.

Hiro Kurata was born in 1980 in Osaka, Japan, and grew up in Tokyo and Chicago; he earned a BFA degree from Parsons School of Design in Brooklyn, where he currently lives and works. Solo exhibitions of his include: Heroic, Point Gallery, Tokyo (2008); Berlin 46, Gallerie Mille D’Air, Berlin (2006); and Illustrations & Paintings: 2003-2005, Hanae Mori Open Gallery, Tokyo (2005). His work was included in the following group exhibitions in 2009: Scribble.08, Wonderhaus, San Diego, CA; New York Connection, Gallery Target, Tokyo; and a two-person show with Tommii Lim at Ad Hoc Art in Brooklyn. (text from Joshua Liner Gallery)