Kei Imazu is a promising artist who uses her impressive technique to formulate new imageries. In her exhibition “Puzzle” at Yamamoto Gendai, she chose old master pieces such as Delacroix’s paintings as a base component and covered them with many kinds of motifs cut out from photos which she took after the 3.11 Tohoku disaster. For Imazu, the meaning that the motif contains is not important in the end. Moreover, she enjoys the colors and shapes of the motifs. She shifts our view to see all objects’ aesthetics and the entire composition. 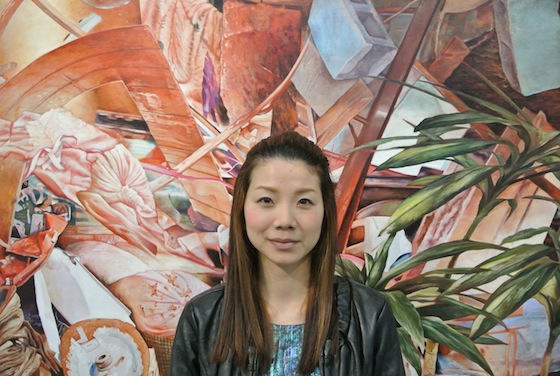 Painter, Kei Imazu in front of her work. 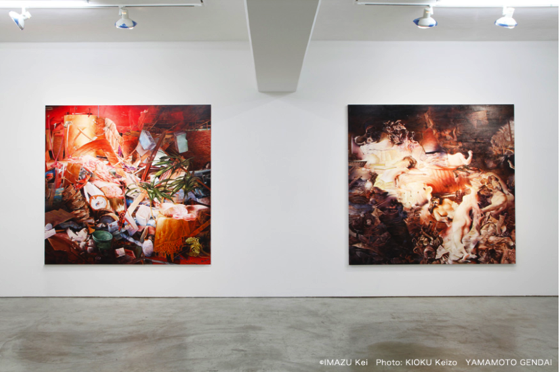 -Can you tell us how you created these works (above)?

These two are based on the Delacroix’s “Death of Sardanapalus”. I use a computer to create the first draft of my work. Setting up Delacroix’s image as the first layer, I put other small object images on top of it. I use the composition of Delacroix’s painting. Object images are photos I took by myself or took from the Internet. 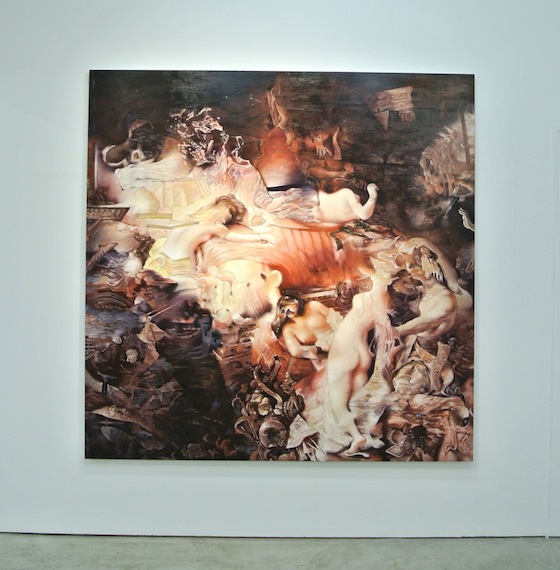 In this work (above), what I actually tried to do was extract the light and shapes in Delacroix’s paintings, erasing people’s faces and meanings; I tried to paint abstractly.

In Delacroix’s work, Death of Sardanapalus, which is based on a play by Byron, concubines and horses are killed. It is a terrible massacre. I thought of adding things to these settings, which was how it all started. 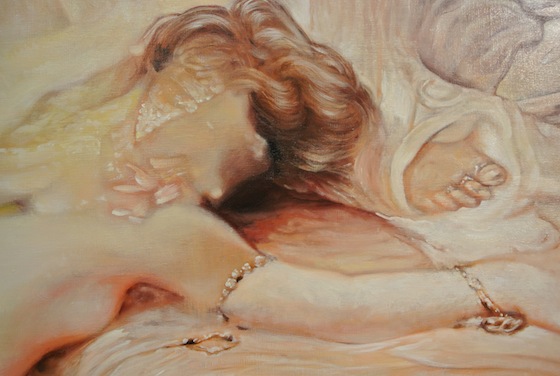 Detail of Kei Imazu “Study for Death of Sardanapalus”

- What was interesting about Delacroix’s “Death of Sardanapalus”?

It was fun painting Delacroix’s paintings. I think this is a characteristic of his paintings, but he depicts violent scenes gorgeously. It doesn’t feel too tragic. It is as if he uses his artist’s sense of aesthetics to numb reality. He twists reality, almost like anesthesia, and that’s interesting. 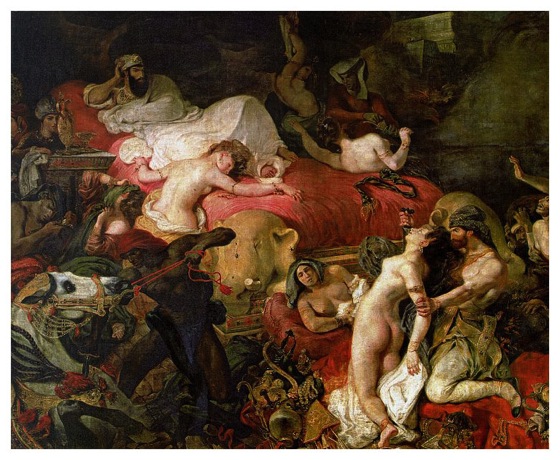 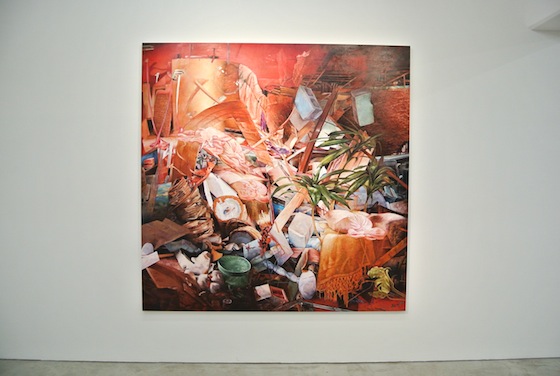 This piece (above) is actually a collage using photos from the earthquake and tsunami of March 2011. My father has a factory in the region, in Ishinomaki City (where the tsunami hit hard), so I went up there to take some pictures. I combined images from a Japanese catastrophe with the Delacroix’s painting. 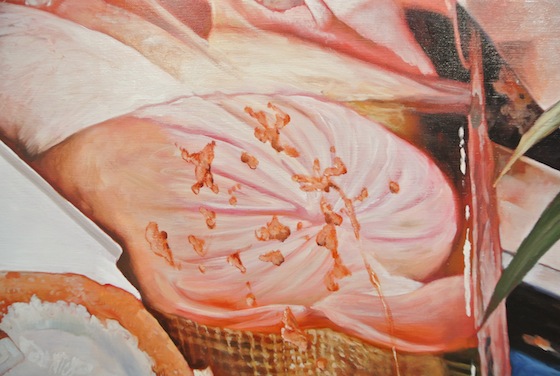 This may sound disrespectful, but the images I saw of the 2011 earthquake and tsunami drew my eyes. Perhaps I’m numbed by art. The events were tragic, but I also see beauty in its shapes and colors. 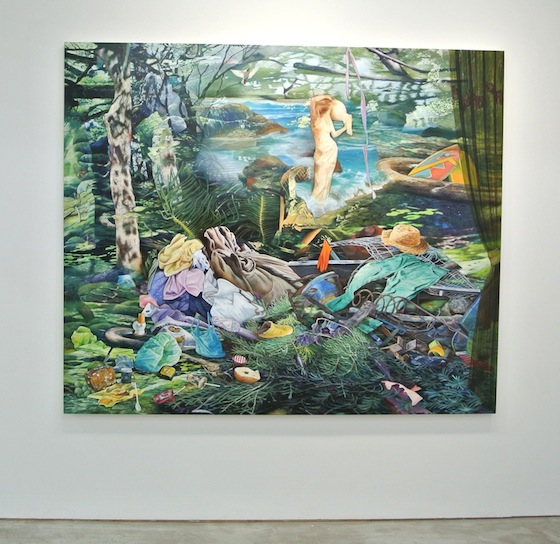 Kei Imazu “Puzzle (The Luncheon on the Grass )”

− What intrigued you about the original paintings you use? Is it their composition?

Yes. It may be that I was interested in composition in all of the paintings.

This one (above) was created from Manet’s The Luncheon on the Grass. Manet’s work itself has an interesting feature; its perspective is off. There are people in the forefront, there are inanimate objects, and there is a nude-like an indoor painting. The painting I’m using is itself full of gimmicks.

That’s why the depth perception is skewed, with the foreground and the background crossing. 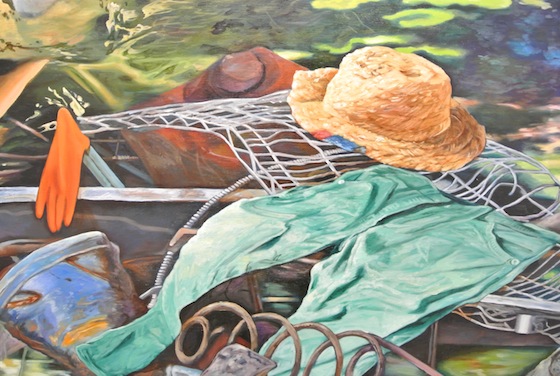 Detail of Kei Imazu “Puzzle (The Luncheon on the Grass )” 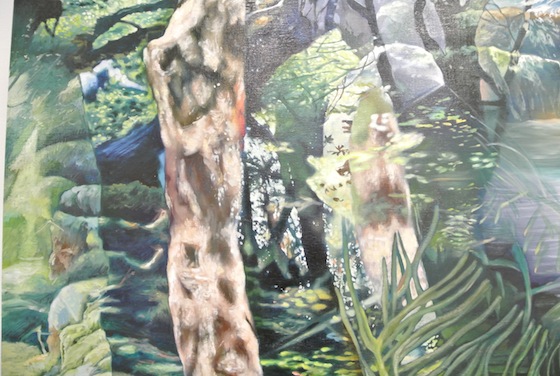 Detail of Kei Imazu “Puzzle (The Luncheon on the Grass )”

- How do you choose and compose the motifs? 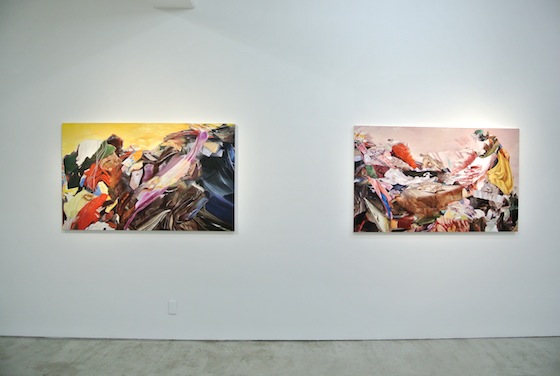 Kei Imazu “Mountains, Valleys, Waves”. She combined Hiroshige’s work as the first layer and covered it with scrapped cars and beds and clothes washed away by the tsunami. 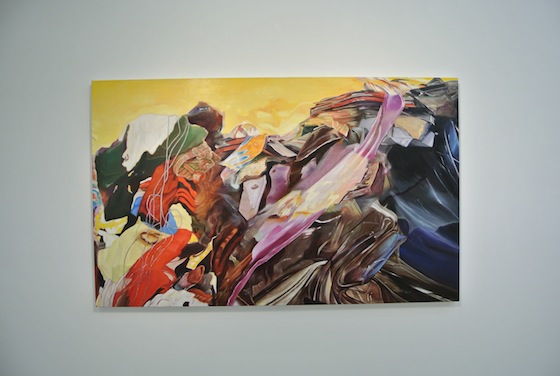 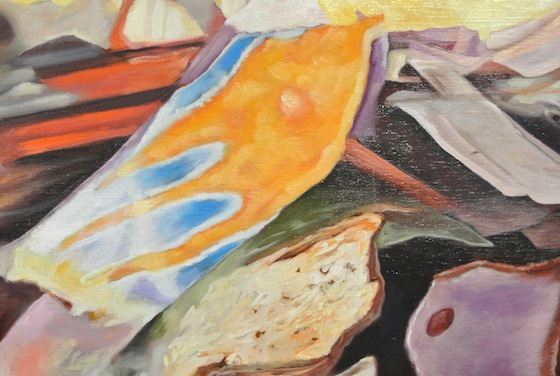 I don’t think Manet and Hiroshige were interested in the motifs themselves. Instead, they were interested in how to compose those motifs in their works. Looking at Hiroshige and Hokusai’s works, people can recognize a bridge or a mountain, but the rhythm of their lines, their compositions jump out at me. Their indifference towards the motifs’ meanings really interests me.

- With the photos of your father’s factory after the disasters, especially, you must have been emotionally moved.

That’s true. When I’m thinking of my work’s composition, I’m really drawn in. But when I start painting, the subjects become mere objects. That’s what I find interesting. It’s like I let go. It all becomes paint, just another element on the canvas surface.

If I remain interested emotionally, I don’t think I could bring my work together. It would just end in confusion on canvas.

-Trash motifs seem to be a common feature in your work. Do you like trash?

One of the themes I often use includes garbage and messy things. Those things tend to be scribbly. Before something becomes trash, it had a meaning. When I paint garbage, it loses its meaning, and simply becomes shapes and colors. Trash loses its role, and simply becomes a surface. I really like how it all becomes one, all over.

I’m also interested in decrepit buildings and caves. I like abandoned buildings, like in pictures you see of rooms that are turned upside down in a huge mess. You can sense the presence of the people who used to live there. It’s different from images you find on the Internet. There’s a real atmosphere there.

There are interesting details like the juxtaposition of a rubber hose and a blanket, or you find cool things like the way a window is broken.

-You seem to see the world in shapes and colors.

Right. I’m not interested in its context. I can’t remember names, but I remember faces really well. Maps also–I always remember a route once taken.

-Do you can accept messiness in actual life?

Not at all! The smallest mess bothers me, and I am constantly cleaning (laughs). There is a reprocessing facility near my home, and I go there to take photos and be shocked. 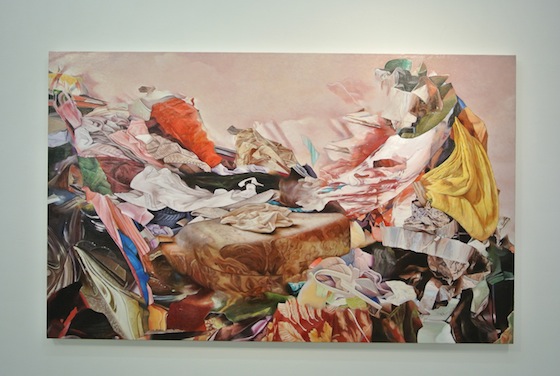 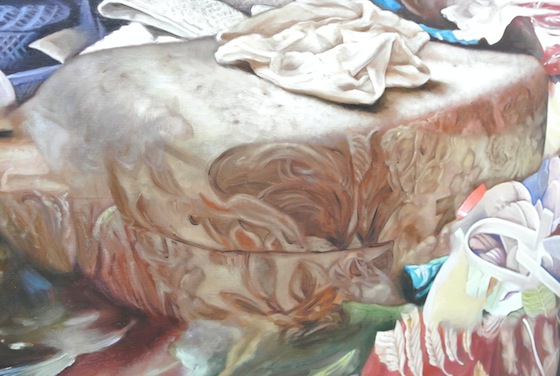 Bringing in elements from the outside

- Why did you start using photos in the beginning of your process?

If I paint solely based on my own imagination, there’s too much freedom for me. There’s no sense of reality. That’s fun on its own, and it is comforting and encouraging. But photographs have a sense of reality apart from me; they are things that actually existed. I incorporate that into my work, as it is. That way, I paint what is not inside of me. I’m inserting reality.

When I spend too much time isolated, painting alone, I start to lose connection with the world. I try to update myself in this way.

By depicting what exists in the world, my paintings become limitless. I thought it would expand the possibilities of my paintings. There are artists who pursue what they love, and I think such artists are incredible and I like them, but I’m not that type of artist.

- Would you say you’re incorporating things outside of your own ideas?

That’s right. It’s fun. It’s fun to react to ideas that are not my own and painting them. It is a challenge every time. It’s outside of my own realm of familiarity. It’s really hard to do!

I used to paint often composing an image on my computer, and tinkering with it. Now, even if the resolution is not right, after I make the collage on screen, I can transfer it to my iPad, and blow it up or shrink it as I paint. It’s very useful.

-So you have many images and photos prepared on your PC.

I began collecting images when I was in my fourth year at university. I have annual files from each year. If I flip through them, I can recall what I was thinking in that year. The files are dated and organized.

When I was a student, there were mostly photos of fun parties and disasters. Lately, photos that get shared online have become fancier, so I think my collection has gotten fancier as well (laughs).

- How long does it take you to finish one piece?

It takes three to seven days for me to design a piece on the computer. It takes longer if I’m lost for ideas. To paint, it takes ten days. Lately, it’s been taking longer to compose pieces on the computer. The size of the work is determined at that stage also. Composing on a computer is like drawing for me. 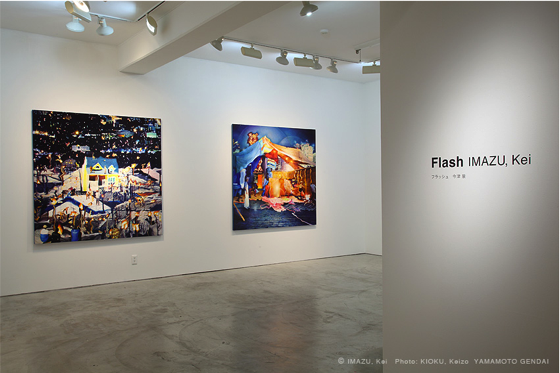 - In your previous series, the wavering appearance was really beautiful and iconic. Why did you draw in that way?

For one thing, using paint in a wavering manner is fun. I can paint lines freely. Secondly, things appear to fall apart and the space becomes abnormal. That’s the interesting thing about painting. The more I give my paintings a wavering appearance, the more it becomes easier to bring everything together. But it also becomes harder to decide when to end. 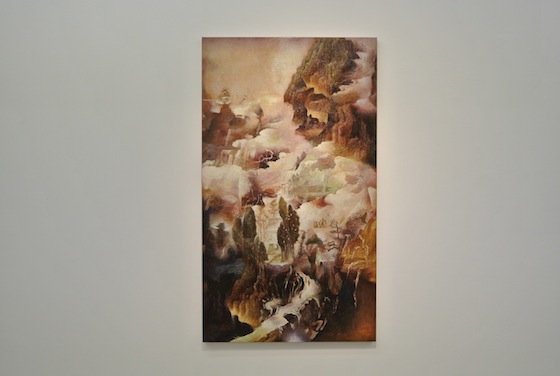 Kei Imazu “Mikawa Province, Horaiji Temple” This is a collage using the Mona Lisa’s background and a Hiroshige. She told us that it was interesting to see it ending up looking like a Chinese painting. 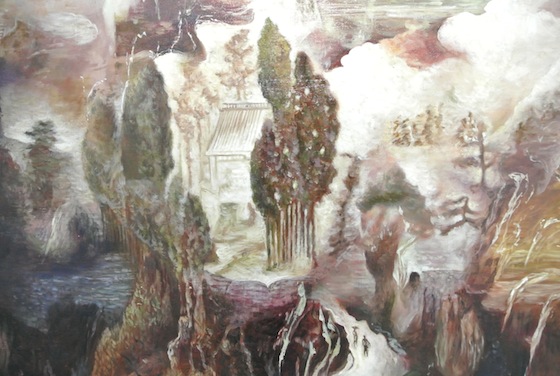 -The title of this exhibition is “Puzzle”. You created your work like a jigsaw puzzle.

I wanted to bring together the West and the East, as well as the old and the new. I painted these to practice this concept.

My last exhibition was called Flash. Light was my main theme. Building windows appeared flat. Houses were in rubbles. I named it Flash, because I tried to extract what was going on in the world and bring it into focus.

This time, I tried to fit together art history and what was going on around me. That’s why I titled it Puzzle.

Tags:Interview
0
Share:
Every Stroller Can Change the World at the Tokyo Metropolitan Museum of Photography
Heartbeat is the beginning: Interview with Heartbeat Sasaki