Playing with shapes and perceptions: Interview with Yutaka Watanabe

When people find a shape, we automatically start to screen our brain to determine whether it’s an animal or a tool that we’ve already known to name it. Watanabe is a young painter plays with that human being’s perception. Many colorful shapes are floating in his painting. One shape looks like a bird when another looks like an umbrella. He told us that what you will find depends on your own experience. 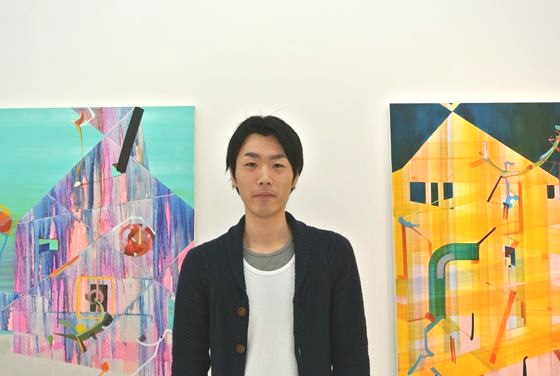 Watanabe in front of his work 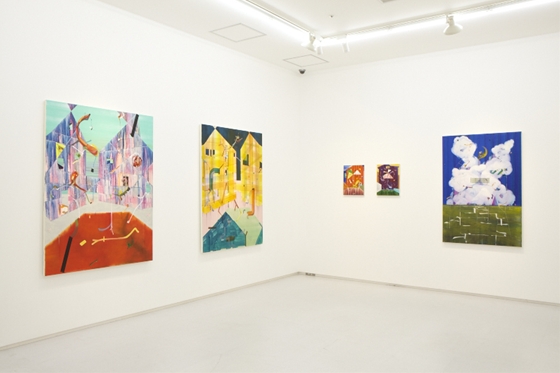 Find what the shape is depending on your experience 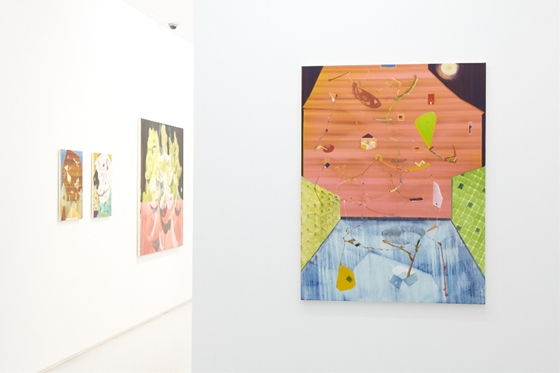 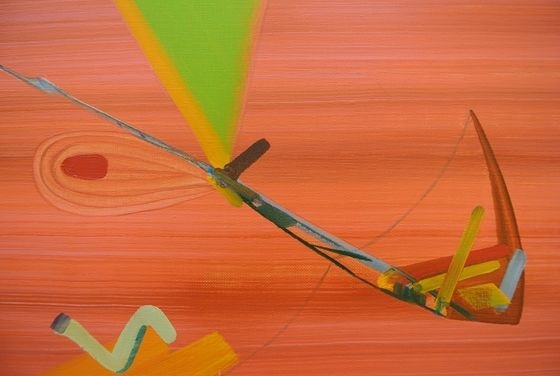 Detail of the painting “ooparts D”.

- The shape of the motif (above) is interesting. It looks like an airplane to me when I get close.

That’s the fun thing I can express with a paint. I don’t want to paint a specific object such as a tree or an airplane explicitly. I want the viewer to imagine what the shape is as they like.

Even if some shapes may look like animals, when you look at the entire painting, it may look like a face. It’s really interesting for me to create those different aspects.

- Can you tell us more about that idea?

I saw a TED presentation mentioning about people’s perception before. In that presentation, the audience could read out the screened sentence even when only the first and the last letter of the words were given. The presenter wanted to show that our brains take meaningless information and make meaning out of it. We never see what’s there, but we only see what was useful to see in the past.

What I am doing is similar to this idea. I provide a shape as a hint and the viewers can understand the shapes from their own experiences. That’s an exciting thing. Some may see a face in my painting, when others don’t. It depends on their experiences.

When the shape starts to look like something specific in my eye, I review what it could look like from another perspective. I keep thinking by seeing from different angles for a few weeks.

When one shape looks like a bird in detail, I see it from apart and rethink. I try to make it look like something else by combining several shapes in my mind. I see my work from both close and apart so that the shape will not be a specific something.

For example, if you don’t know about a deer, but when you encounter it, you still recognize it. I try to see things in that sense.

-Wow, that sounds difficult! How can you ignore your recognition which tells you to see it as a deer?

One of the reasons may be that I’m not attached in one object. I easily get tired of one thing and move to the next one. When you get addicted to one thing, you can’t put your eyes off of it. I try to see anything in the same emotion. 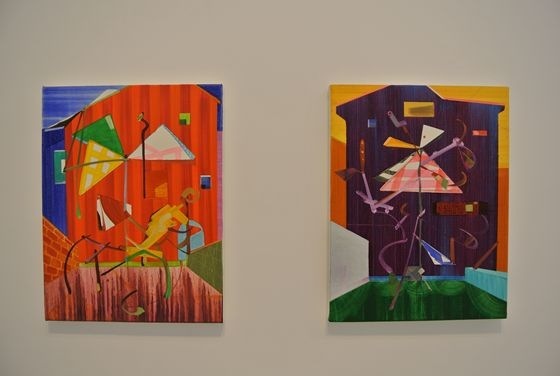 “ooparts OJP” on the left and “ooparts NJP” on the right, both by Yutaka Watanabe 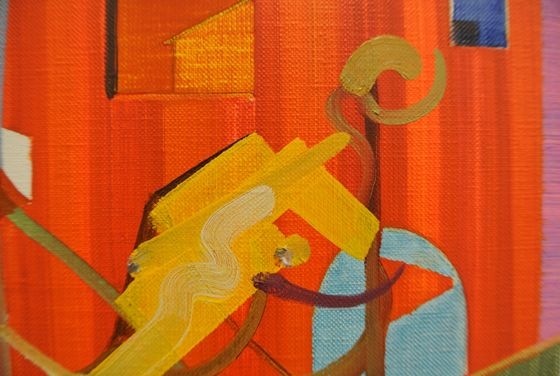 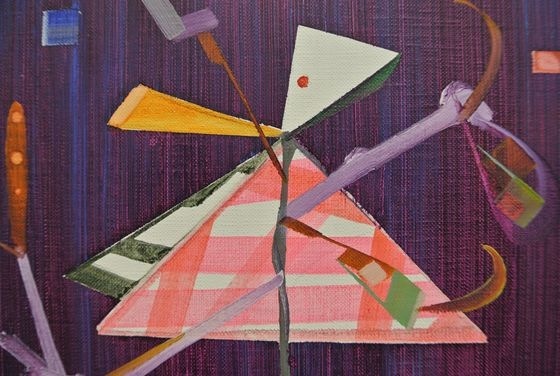 Playing in the blank space

-You said in the statement that “I imagine an anonymous place and blank space, then embody and reconstruct the power and memory which remains.” What does the “blank space” imply?

I’m not depicting a specific space in my work. I used to play in a blank space in my childhood. I lived in the middle of Tokyo. There was little room for nature and playgrounds. Blank space was a place where nobody would disturb me. There was a freedom. I enjoyed playing there by myself.

Playing at that space and playing in my painting somewhat linked in my head afterwards.? Blank space is a springhead of my painting. Now, I want to create the most playful space in my painting.

-What does “playing in a painting” mean for you?

I draw with a paint and that is my playing tool. I can decide how to use this tool and choose what to draw which is enjoyable for me. Playing is more like interest or excitement than finding what is comfortable for me. Imagine you are watching a fun movie. You don’t have to think about its historical background. That is what I want to realize.

-What kind of blank spaces do you like, especially?

I like the place where not many people walk by and nobody will find me. It is the place where I can feel as if it is my own place. A secret space where even my friends or parents don’t know. 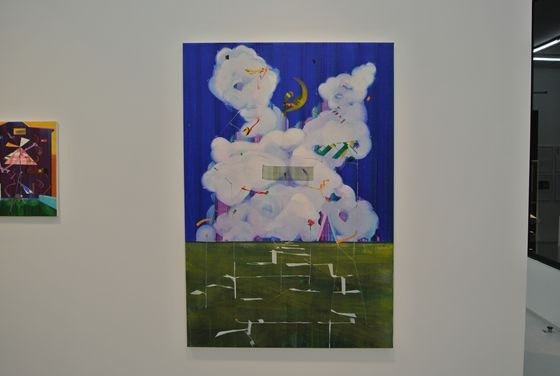 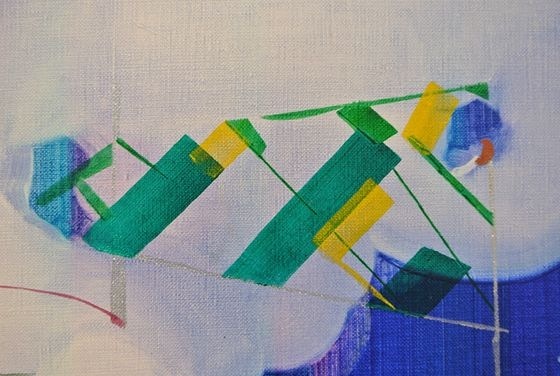 -This painting (above “Rae Hu”) reminds me of a cloud in summer.

This one is a little bit different from other paintings since my desire is included.

In my childhood, I stayed in Hokkaido (the most northern island in Japan) where my grandfather lived and I used to see these kinds of scenery and clouds during my summer vacation. It was a place where I wanted to stay much longer. I love the cumulonimbus cloud. It makes me feel excited since it looks as if there is a hidden castle of Laputa. (Film “Laputa: Castle in the Sky” directed by Hayao Miyazaki,1986 ) 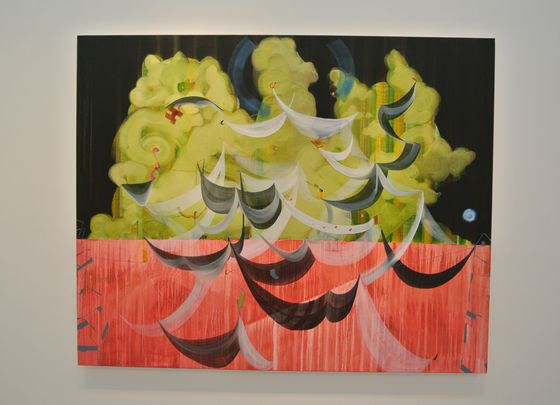 -Another cloud shape is seen in this work too.

This one is more like a smoke instead of a cloud. It may not be appropriate to say this but the shape of a smoke born from a big explosion is actually beautiful, just seeing its shape. Some sort of fears and pains are also included in this work.

-How do you create your work? Could you tell us about your process?

I don’t do drawings or make a precise draft for my work, but directly start drawing on a canvas. It is because I want to keep my mind fresh.

-All your ideas are only in your head?

I do very small drawings a lot. They are more like scribbles that you draw while you are talking over phone. I pick a few scribbles among them. Then, make a canvas in the determined size all by myself. 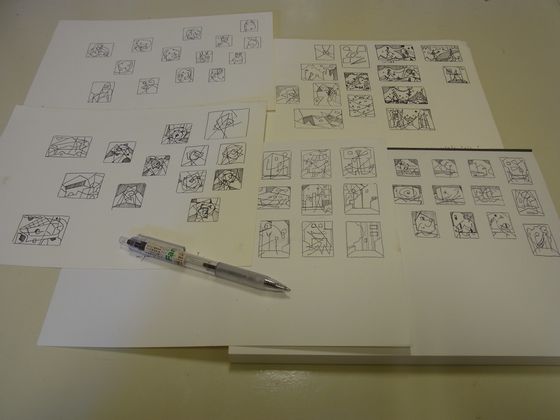 Watanabe does these tiny little drawings to develop ideas. 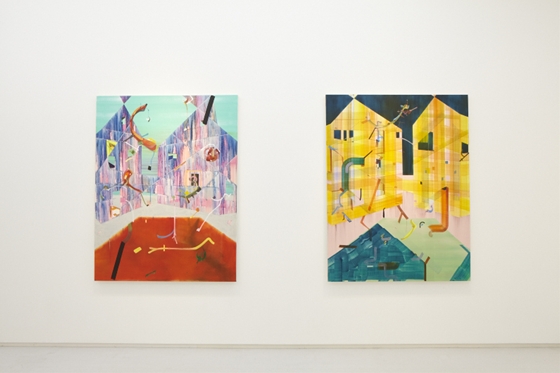 “D-8″ on the left and “GL SSG” on the right, both by Yutaka Watanabe. Photo by Kenji Takahashi 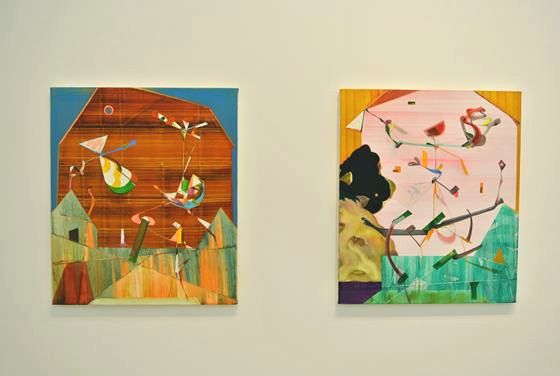 “ooparts GH” on the left and “ooparts BF” on the right, both by Yutaka Watanabe

When I am working on one painting, I often come up with another idea.? After working on bright colors with tension, I want to work on dull colors in low-key.

Usually, there are two types of works which are in extremely opposite direction. This process is also necessary to keep up my motivation since when I work on only one style of coloration, it tends to end up with an unsatisfied work. 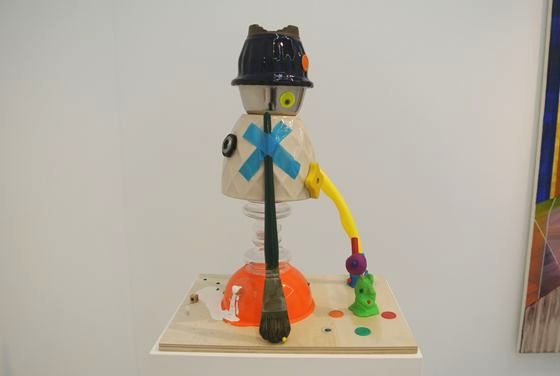 -Your sculptures are so funny! Why did you start to create these?

As I do small drawings on paper, it tends to become in similar shapes. I want to create a shape which is unseen even for myself. So I started to collect objects and combine them to find a new shape which has never appeared in my mind. I want to encounter new shapes through this process. 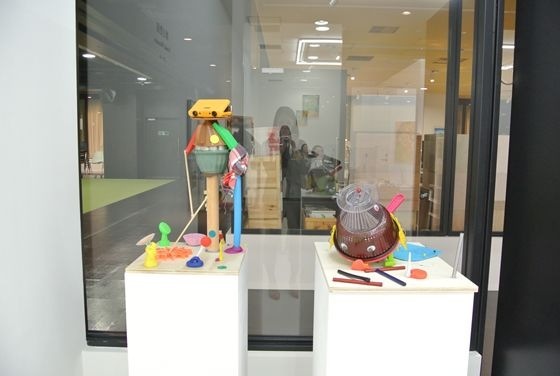 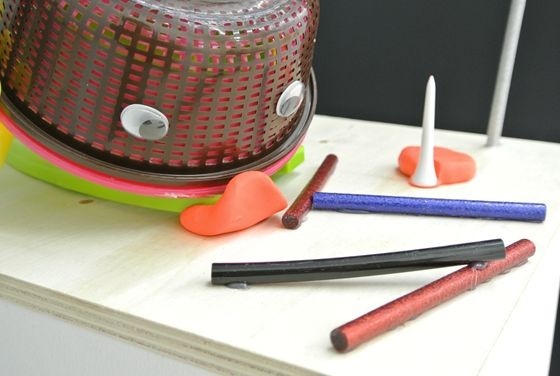 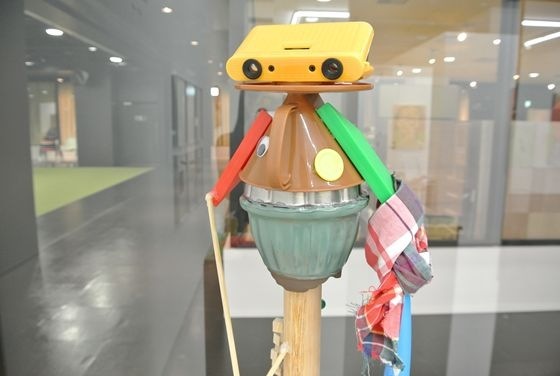 -How do you put a title on your work?

For the title of the paintings named with “ooparts”, “ooparts” is a word to be named on an historical object found in a very unusual or seemingly impossible to be created in the same historical period.

For the sculptures, the letter “k” comes from the word “kami“(meaning god in Japanese). It is believed that the god is living in each object in Japan which is describe as “Yao yorozu no kami” meaning “eight million gods”. So I am planning to create a lot of these gods.