One of the biggest Japanese art festivals came back with Yayoi Kusama!

Roppongi Art Night is an all-night art event whose stage is set in the entire Roppongi area, a famous district within Tokyo for both night owls and art lovers.

The last edition of this event, which was planned for late March in 2011, was canceled because of the Tohoku Earthquake that occurred on March 11. In order to bring back a cheerful mood to Japan, this year’s theme is “creating art and giving genki (high spirit) back to Japan”.

The rain had stopped by evening. Fascinated art lovers were rushing to the venues…. 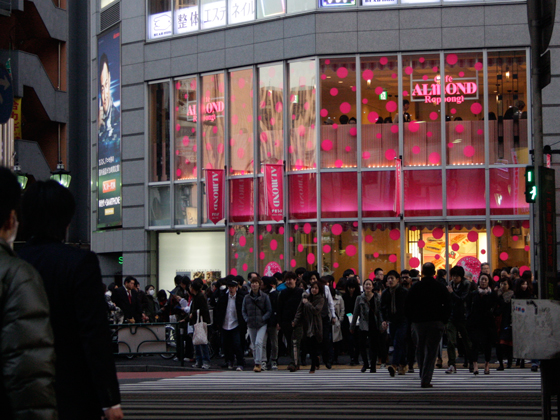 At the Roppongi intersection, a symbolic landmark of Roppongi, cafe ALMOND had transformed to “Mizutama (polka dot) cafe”!

The first 300 diners could get Art Night original, limited Kusama scarves, so many people were standing in line to get them. 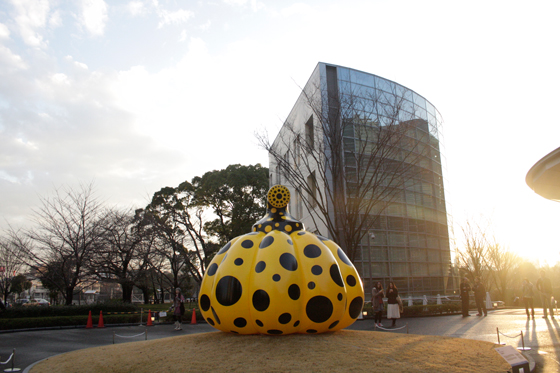 One of Kusama’s most iconic motifs, the yellow pumpkin, appeared in Roppongi. Its mysterious presence changed the atmosphere completely….. 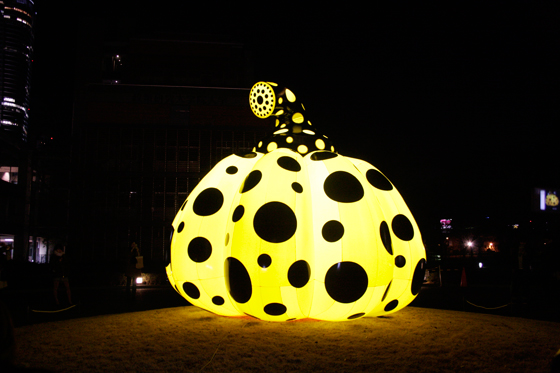 After sunset, it showed a different appearance. 3-meters high, the yellow luminous pumpkin was popular with people till late. 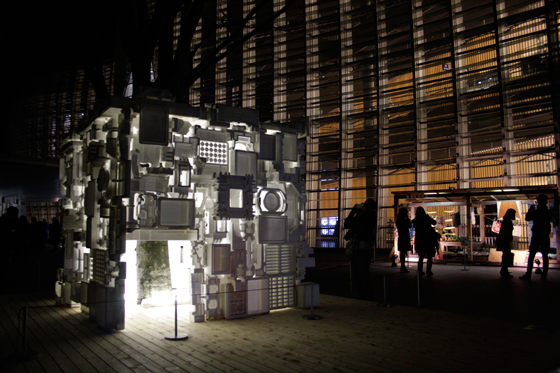 The softly lit square object in the picture, was a tea room made of various pieces of styrofoam. The artist Kaihatsu actually organized a tea ceremony here. 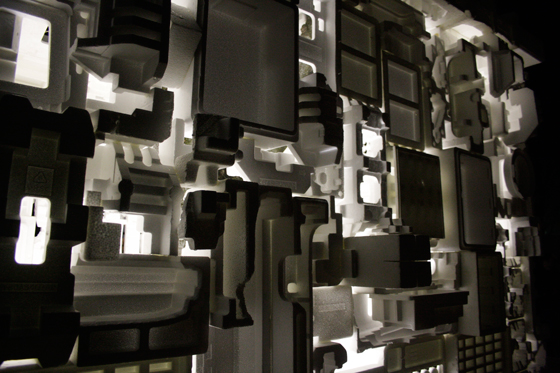 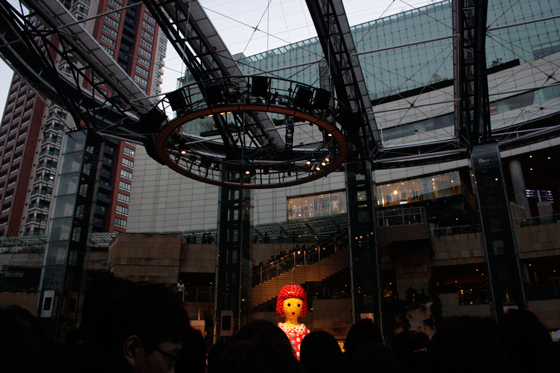 People were getting together at the Roppongi Hills Arena as the start of the opening ceremony approached. The circle-shaped open space was filled with countless crowds of people.

Can you see the figures who were even standing on the stairs and balcony behind the 10-meter-tall “Yayoi-chan”? 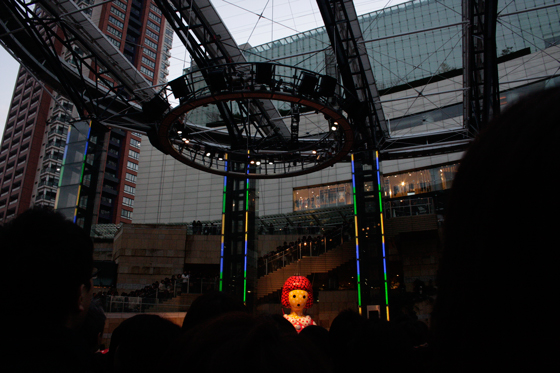 At precisely 17:56, the time of sundown, the ceremony started with cheerful music and playful lightning effects. The “Yayoi-chan” balloon had not fully appeared yet…. 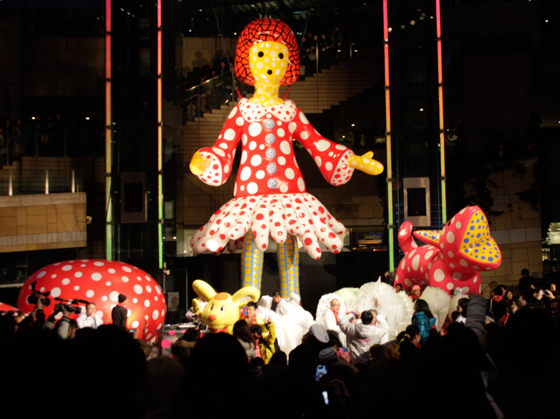 Ta-dah! The 10-meter-tall “Yayoi-chan” and her dog “Ring-Ring” made their full appearance!? This work is a symbol of peace and hope, which perfectly fits the festival concept. Yayoi Kusama coming out with staff

After the statement by Fumio Nanjo, executive committee chairman, Yayoi Kusama showed herself to the audience! Cheers were raised here and there.

Incidentally, the red scarves her companions wore were the ones that people stood in line for at “Mizutama café”. Yayoi Kusama read poems aloud for the audience and the sufferers of the Tohoku Earthquake. The audience listened breathlessly to her powerful message. 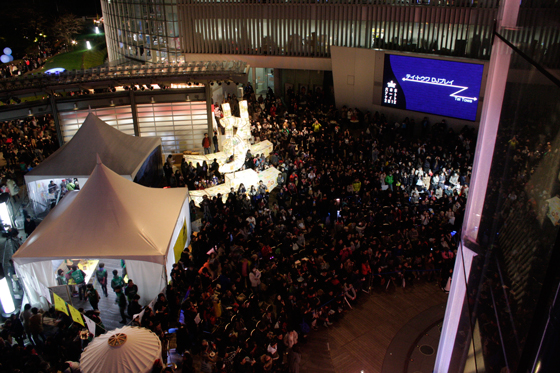 After the ceremony and Kusama’s reading, the crowd enjoyed a famous DJ play.
Everywhere, there were people, people and people…! 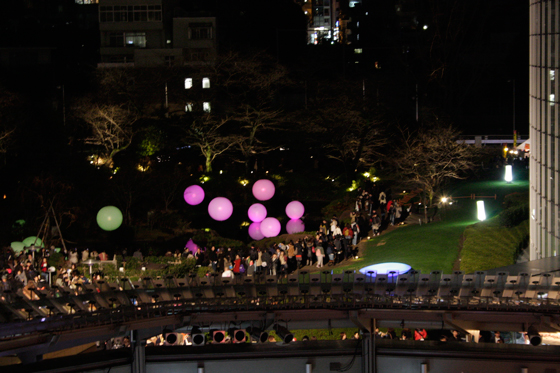 On the outer side of Roppongi Hills, colorful big balloons were floating in the air… . 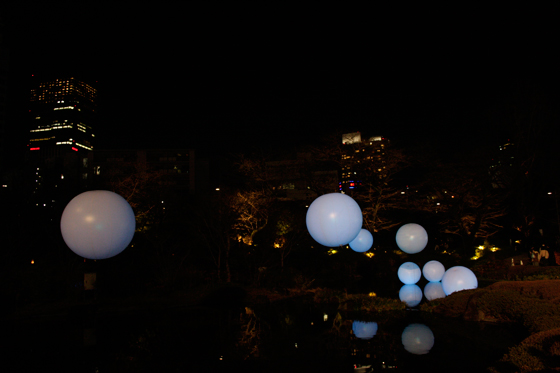 This is an artwork by the ultra technologist collective, Team Lab and musician Hideaki Takahashi. Floating balloons radiate various colors, but once someone touches one, all the balloons synchronize and change themselves to the same color. Reverberating sound comes with the light.

Someone probably touched a blue balloon before I came here….
The contrast of high buildings and floating light that reflected on the surface of the pond created a dream-like atmosphere. 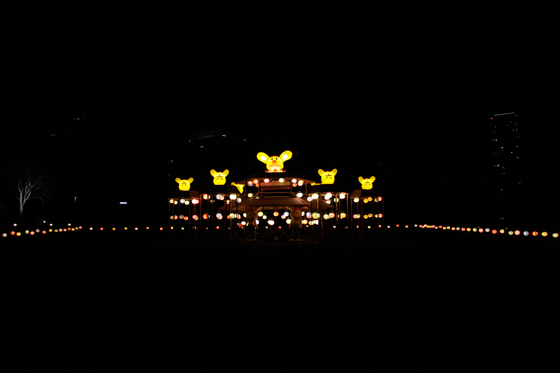 Antenna, “Roppongi Rokuyo-do”, temple like stracture for one night only

Antenna is a Kyoto-based artist group who creates works inspired by Japanese traditional culture. The yellow cartoon-like mice topped on the temple are “JAPPY”, whose original character concept is “JAPAN? x HAPPY? = JAPPY”. This work is a wish for happiness. During this festival, main museums and many restaurants in the Roppongi area stayed open till late especially for this event. People enjoyed art and then went to restaurants talking about what they experienced. This is exactly “art in life”.

Can’t wait for the next edition of Roppongi Art Festival!