AZITO is pleased to introduce the super intricate artworks by Etsuko Fukaya.

Drawn with the intimacy of a needle and the intense concentration of the naked eye, Etsuko Fukaya’s etchings appear to challenge the very possibilities of boundaries and scale.

Born in 1981, Fuyaka is a prominent young artist, celebrated for her intricate artworks depicting lush, vibrant worlds where flora and fauna coexist within small frameworks that rarely spill over 12in x 12in. Her creatures have a life of their own. Not a hair is missing from any animal, and every bird’s feathers are delineated with surprising exactitude, as if to push the physical limits of detail itself. These delicate etching marks reveal surprising amounts of information in compact spaces.

Detail images of “Untitled(25)” by Etsuko Fukaya
“Untitled (25)” brings us an image of underwater life. Their bodies are suspended, twisted, and interlacing in a degree of gravity that belongs to another realm. Hyper-saturated, these creatures appear to glide effortlessly through spaces outlined by nothing more than the delicate handling of ink droplets on paper. 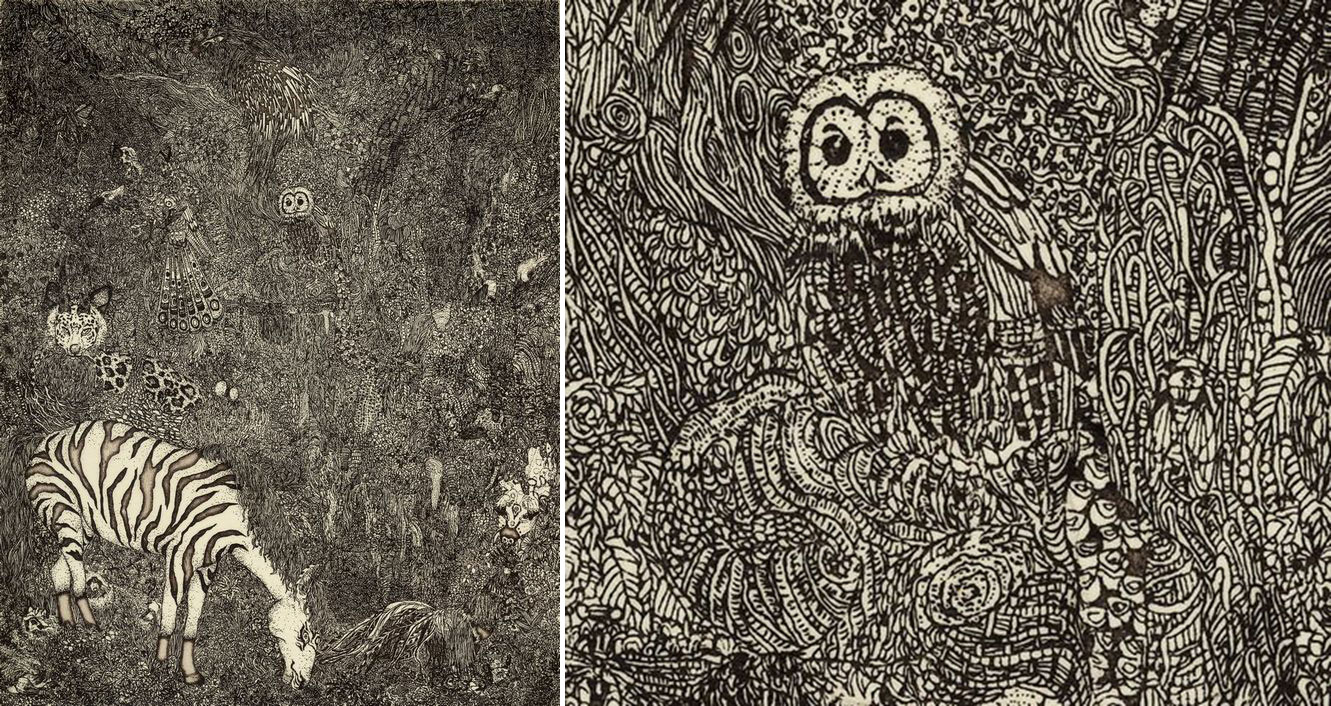 “Shofuku” by Etsuko Fukaya, detail on the right
In “Shofuku”, the amount of detail appears endless. Animals emerge out of thick forestry, and their eyes glisten with anticipation. The surface is filled with linework, color, and hardly any space is left untouched. The edges of the image seem to burst.

“Untitled(20)” by Etsuko Fukaya, detial on the right
In contrast, “Untitled (20)” depicts a serene, if not fantastical interaction, between a wooly, winged creature and a butterfly. Cognitively impossible; yet with the level of detail of their features, it seems less possible that they aren’t real.

“Untitled(10)” by Etsuko Fukaya, details on the right

Thus, with dizzying levels of precision, Fukaya creates worlds where animals and plants enjoy the richness of their tiny worlds, as if to remind us of the possibilities that lie outside their edges.