Tomoko Fukushi’s works are drawn on a white board with a black parmanent marker. “Why drawing on a white board?” may be one of the questions the viewers ask themselves. This question is a good point to start a journey through the life of an artist who tried to find her own expression. 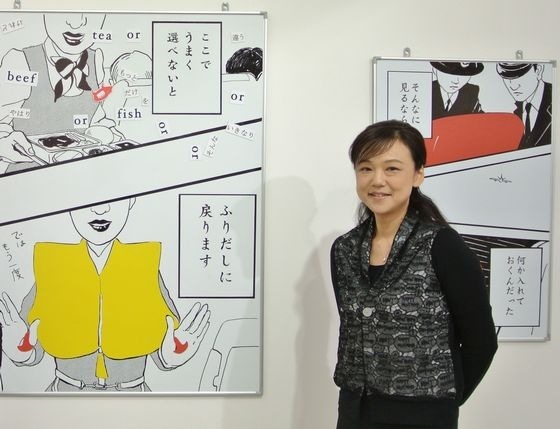 Tomoko Fukushi at her exhibition “Boarding” at Yamamoto Gendai.

White board as a new medium

-Although you were majored in oil painting, how did you come up with your style, drawing manga on white boards?

I used to draw paintings in-between figurative and abstract in my early career. However, in 2005, I wrote my PhD report and had a chance to look back on what I was truly influenced by in my life. Since I was little, I love to read and draw manga. Takano Fumiko is one of my favorite cartoonists. Her way of depicting the scene is interesting. How the angle changes from frame to frame was just like a movie.

Another typical feature of manga, especially in girls’ comic is that the words which characters thought in their mind but not vocally are written in the frame. I found that many words come into my mind when I’m drawing a painting and wanted to bring them on the canvas directly.

I’ve just drawn manga to show it to my friends and worked on paintings until that time. But gradually, I started to try bringing manga features into my work. However, I didn’t have confidence to show it publicly. 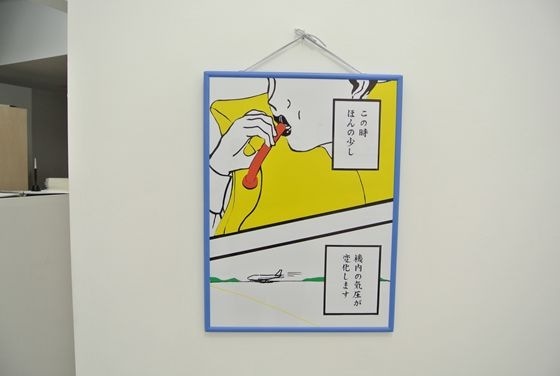 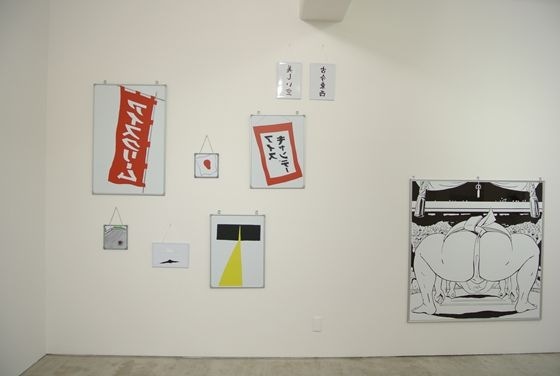 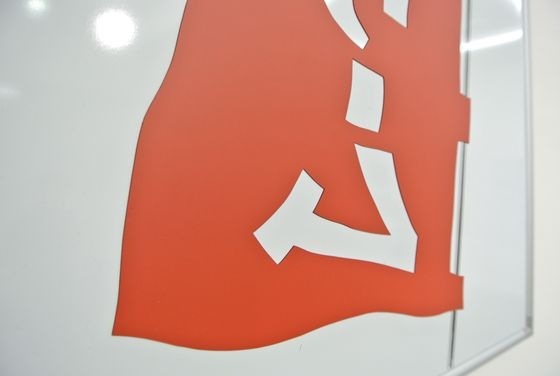 Close up of the work “landscapeice cream” which says ice cream. Red part is a cut out magnet sheet (not painted!).

-When was your first chance to show manga style works openly?

The exhibition was for the memorial day of World War 2 held every year. As this exhibition aimed to convey a message to others, I decided to use a white board since it is used as a medium to tell a message to someone. For example, people use it in an office for project presentations and messages can be erased and rewritten again. It was my first time that I considered to use white boards for my work, drawing a manga on it with my ideas brought from my daily life. White boards are simply beautiful too. Those are the main reasons why I decided to use white boards for my work. 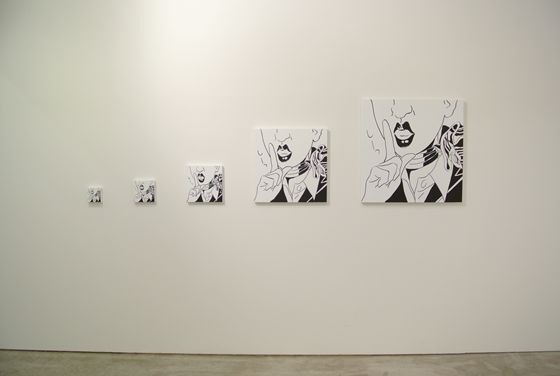 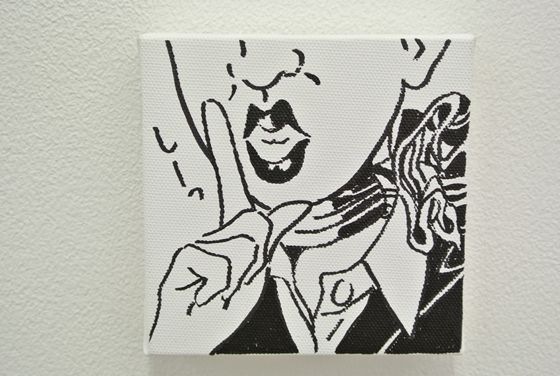 -So at that time,you made yourself understood to show your new ideas?

Yes, kind of. When I was asked to join the exhibition I remember that I was very anxious. I thought that this new way of painting may not be that interesting for the viewer. But on the other hand, I really wanted to try something new. It was kind of a dilemma to me which made me even more dubious about my work. Despite my concerns, viewers simply accepted my works. And I could convince myself to work in this style. 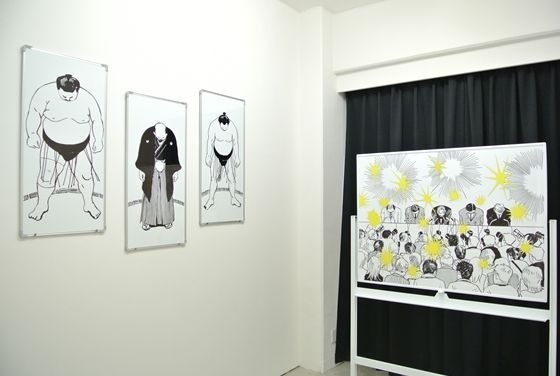 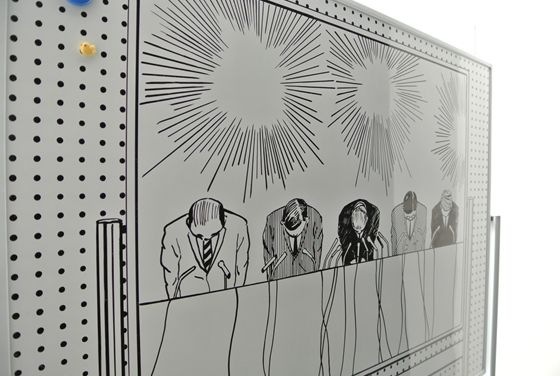 Back side of “Front and back” 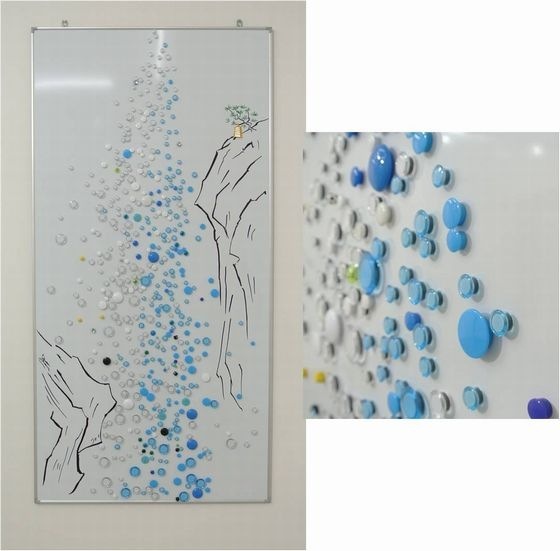 Tomoko Fukushi “waterfall”. This waterfall is made of magnets.

-It is interesting that you use magnets in your work.

I wanted to create an illusion to the viewer’s eyes. I drew a cliff with a black?permanent?marker and created a waterfall with magnets in this work (above, “waterfall”). Although it’s a bunch of magnets, it looks like a waterfall in our eyes. Another interesting part of using magnets is that it gives us a sense of surface. Wire mesh fence is drawn in this work (below, “inside/outside”) and viewers will feel a space behind. But by putting magnets randomly on its surface, viewer’s eyes recognize its surface and flatness. I’m playing with that effect. In addition to that, I think it is a “moving painting” in some ways, which gives a new possibility to painting. 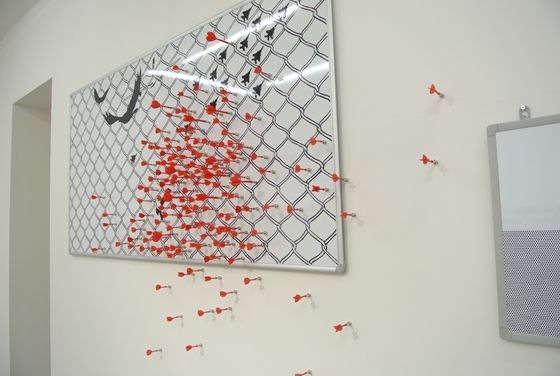 Tomoko Fukushi “inside/outside” Lots of red arrow magnets are place on and around the work.

-Your work has a sense of humour. Where does it come from?

I think it comes from my favorite manga. I want to entertain people or surprise people with my work. Also, things that show up in my everyday life are the most important crucial hints for my inspiration. I write down when I get ideas to remember it. 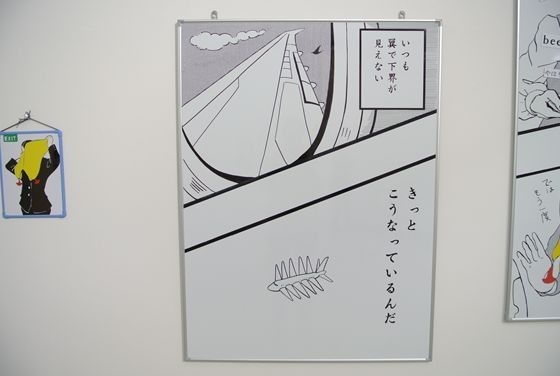 Tomoko Fukushi “It was when I took a seat next to the wing again”. It says “We can’t see what’s beneath the wing,” “It might be like this.”

I include a dichotomy between the two, like a pair of opposite words. For example, this one is depicting an escalator which goes up when the other one goes down. What you see as you go up or go down with an escalator is quite different. A man is saying “A woman!” in this work while a woman is saying “A man…?!” in the other one. The situation behind these scenes we imagine are quite different. Displaying these pair of works side by side, I want to express that one is not on an equal footing with the other or but is in a completely different situation. 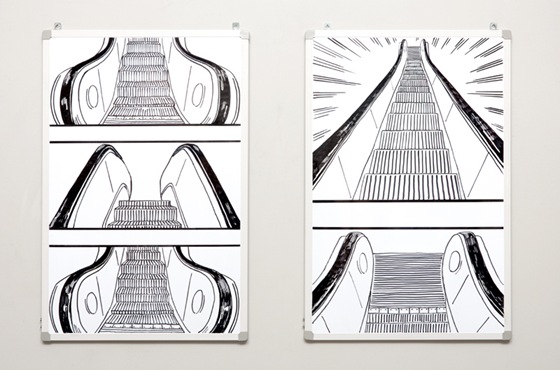 Tomoko Fukushi “up” “down”. 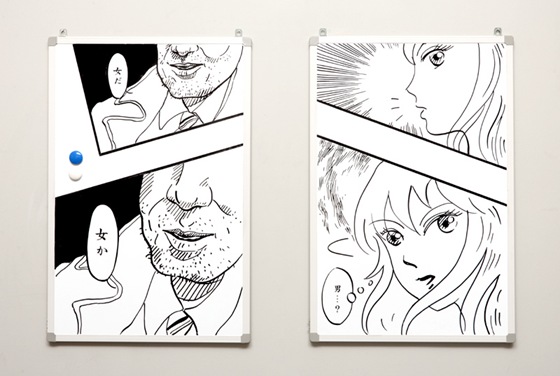 -Congratulations of winning the prize at “Art In The Office” (Art competition organized by Monex (online securities company) and AIT (Art initiative Tokyo). Why did you apply for that competition?

It sounded interesting to show contemporary art in an office. My work is drawn on white board and that will be fun to be exhibited at a work place where white boards are used as a its original function. The competition also required to work with their employees. So I held a little workshop for them.

I handed them a sheet of paper with an unfinished manga, asking them to complete it by drawing, adding words and putting a title on their own. They presented their own manga in front of others and I got lots of inspiration from them. This experience gave me ideas to my creation and I could bring my new artworks to their office in the end. It was an exciting moment that I ever had.

- Thank you for your time. We are looking forward to seeing your new entertaining work. 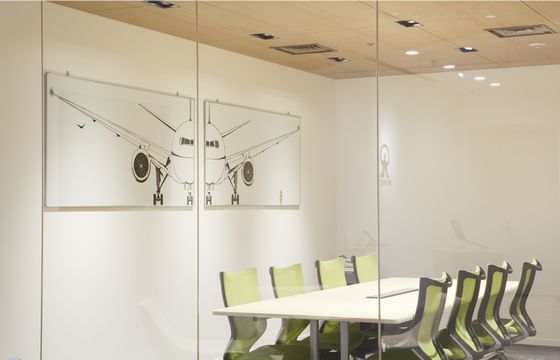 Tomoko Fukushi’s work displayed in the press office of Monex

Tags:Interview
0
Share:
A place to notice your hidden character : Interview with Kyoko Nagashima at exhibition “THERE”
Interview with Makiko Kudo at her solo exhibition in Tomio Koyama gallery