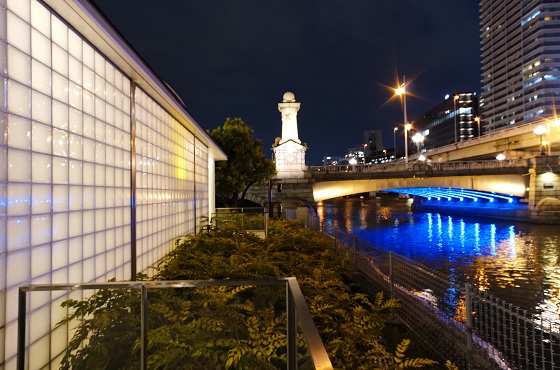 Now in its third year, Osaka Canvas Project is the most up-and-coming outdoor art festival in Japan. Using a wide range of outdoor sites and several indoor spaces across Osaka prefecture, it aims to enhance the attractiveness of the region drawn by the artworks.

This year, Osaka Canvas Project presents a thought-provoking installation created by Tatzu Nishi who is attracting international attention with his project in New York, “Discovering Columbus”. In “Nakanoshima Hotel”, Tatzu Nishi has changed public restrooms into a luxury urban style hotel and visitors who have the reservation can stay the night. Azito could have a short interview with him just before the opening day while he was still working on last-minute finishing touches. 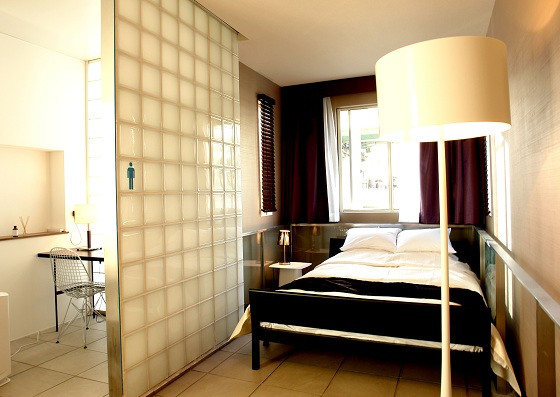 Japan has the world’s highest regulatory barriers against public art. But it may ease if more people enjoy it.

-What brought you to join Osaka Canvas Project?

It’s simply because I love Osaka. But the biggest reason was, Osaka Canvas Project is the public art festival that is initiated by local government. In Japan, authorities do not allow artist to work in outdoor public places like streets or parks. Maybe Japan has the world’s highest regulatory barriers against public art. Nevertheless, Osaka prefecture is trying to allow public artists to show their works or perform in urban central area, not just trying to sponsor the event. They also do not hesitate to ease the regulations for us. It is a very rare case. I submitted my proposal to take part in those actions. It would be great if a lot of people come up and find the fun in public art. That way it will be more popular in Japan. 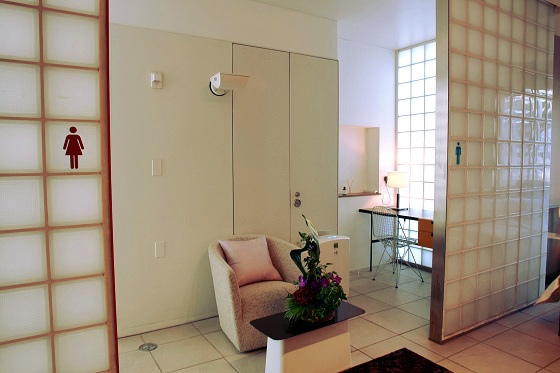 Accentuate the difference between outside and inside to make the space unrecognizable at a public restroom.

-Where did interior design concepts come from for “Nakanoshima Hotel”?

This is a totally new challenge for me. Usually I create a space encompassing statues or monuments, but this time, I built a room component attached to the existing restroom facilities. Key point was making the space absolutely unrecognizable as a restroom. I think if people could recall the fact this is a restroom when they entered, things get screwed up. I adopted red and purple color scheme, which is unlikely to be used for a restroom. It was also to accentuate the difference between outside and inside. There’s the lush green of a rose garden in Nakanoshima park outside the room, right? So, I skipped out on green tone colors and light blue of the sky. 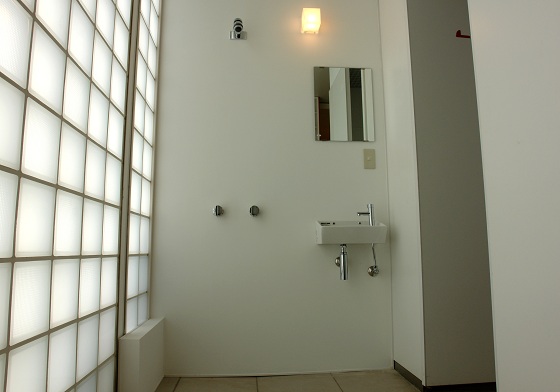 Bathroom of Nakanoshima Hotel. A toilet compartment is one of the public restrooms.

Limited budget brought the idea to use the public restroom.

-Why did you decide to use public restrooms for this project?

First of all, I wanted to develop a hotel project in Osaka, especially in this Nakanoshima park. Since it has a nice city view, a river view and a rose garden, too. My experience indicates the most money consuming part of a hotel project is plumbing installation. It’s hard to get permission and we need a big boiler for the bathroom. But this project had a really small budget. Then I got an idea to use existing water supply system in the public restrooms. 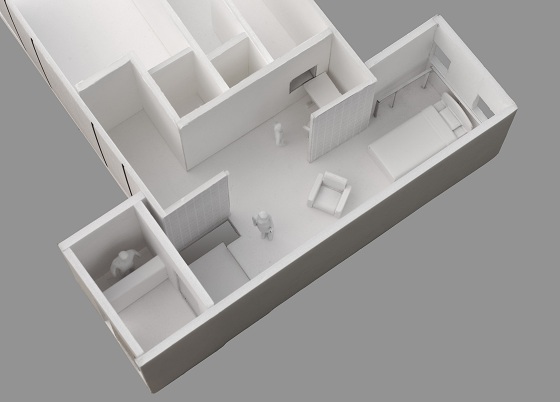 Every time as people pass by, they will remember that once this restroom turned into a hotel. It is more exciting to me.

-As in your works, there’s nothing tangible after the exhibition. What do you think about this? 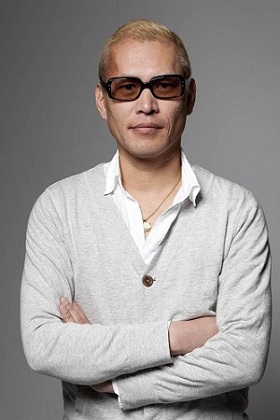 I started my career in the field of public art. So it’s natural to me that works should be put away shortly after one or three month exhibition. It’s interesting to see people come and be amazed for my work, saying “wow, can’t even imagine this!” And after dismantling, every time as people pass by, they will remember that once this restroom turned into a hotel. It is more exciting to me. 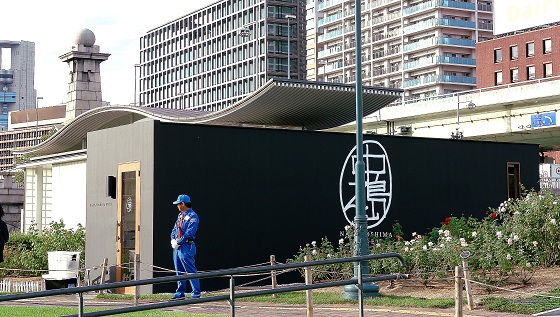 Exterior side of Nakanoshima Hotel. Night-tiime security is available for hotel guests.

Despite his hectic schedule, Mr. Nishi answered every question kindly and sincerely. It remains a mystery why he can always pick up the right place that city residents are truly fond of or proud of. However, his words remind me that he is building a totally new invisible monument in our memories. It is what all town people can share. That’s a reason why so many cities in the world, like Basel, Liverpool, Hamburg, Guatemala City, Singapore and Ghent eagerly desired to hold his project. Then more will do in the future. 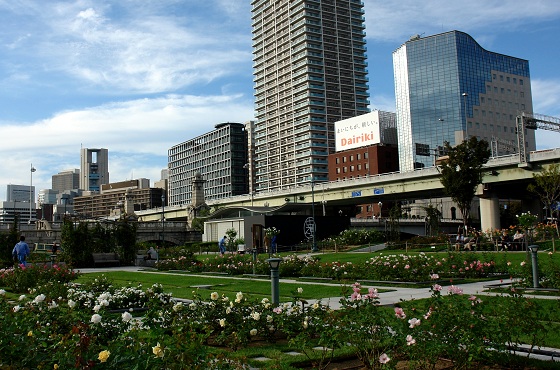 The hotel is located in a rose garden of Nakanoshima park. 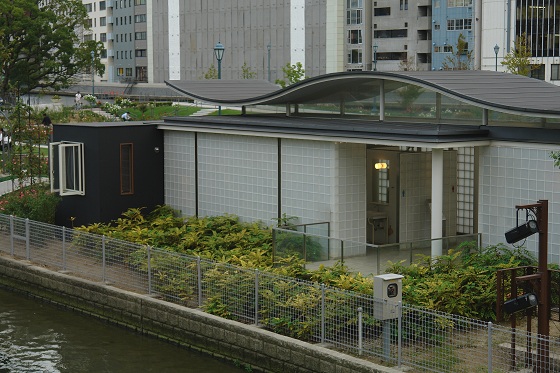 Back side of Nakanoshima Hotel. Black structure is a room component for this installation, which is attached to existing public restrooms.

A list of works for Osaka Canvas Project was selected by a jury through a contest. Osaka Canvas Project is also widely known for its cutting-edge and challenging exhibition. Sometimes it is even willing to engage in works representing squalid energies of this big town, Osaka. Here let me share with you some remarkable works from the list. 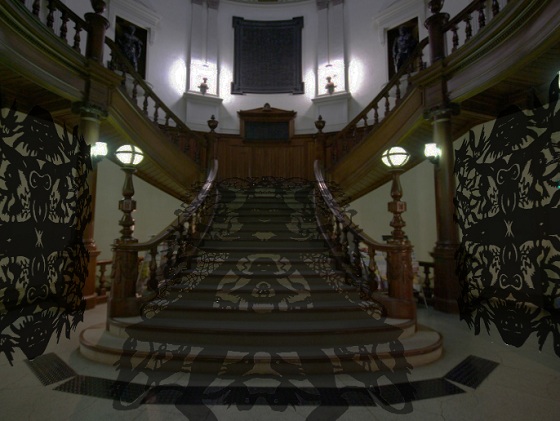 Sawako Tanizawa’s “Minhameguri” is huge paper cutout depicting folk stories in Osaka. They are on display in the Osaka Prefectural Nakanoshima Library which is one of the most loved architecture by Osaka people. 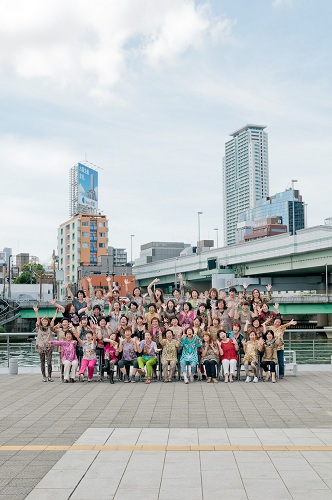 47 Obachaans is a performance art acted by 47 middle-aged women who have particularly typical features of Osaka people. They generally doesn’t have slim bodies, love to wear gaudy outfits (especially leopard patterned ones) and always take too much care of others. Maybe you can’t imagine how they are! For such people, they wander around the venue and keep trying to communicate with visitors in some strong-arm manners or you can take group photo together with them like a photo here. 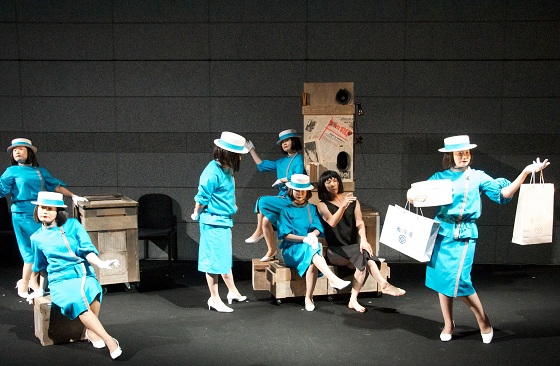 “Railroad Art Festival”, another hand-in-hand project with Osaka Canvas Project, is led by Miwa Yanagi. She conducts series of training workshop to bring up “Elevator Girls” known as one of her major themes. Theatrical works are scheduled in coming December. Azito plans to follow these projects. Don’t miss our report. 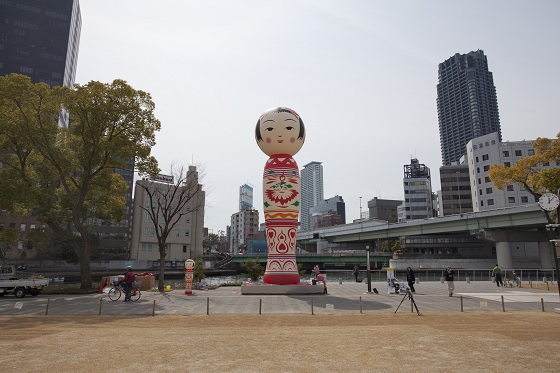 Osaka people simply love a huge object. So this work becomes popular among visitors. “Hanako” is a giant balloon Kokeshi doll. Kokeshi is originally a traditional Japanese wooden doll made to wish for well-being of children. A foot bath is available at the foot of “Hanako”.