Interview with Naoko Sekine, “go for a walk at twilight” at MA2 Gallery

AZITO > Naoko Sekine > Interview with Naoko Sekine, “go for a walk at twilight” at MA2 Gallery

After viewing the details of her drawings up close, one shouldn’t be surprised by Naoko Sekine’s large hands and elegantly long fingers, despite her petite stature. Using only pencils–and a stylus at times–she fills up large canvases with both powerful fish scale-like imprints and soft puffs of graphite clouds. She temporarily wrapped up her projects in Japan this month with an exhibit at MA2 Gallery in Tokyo before she moves to Paris next year. 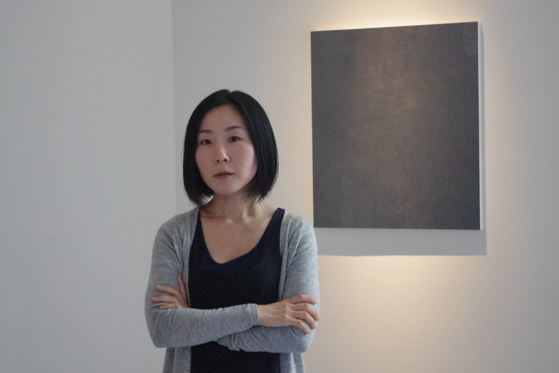 Naoko Sekine standing in front of “The captured charm” 2012

-For this exhibit, you created your pieces with the MA2 Gallery in mind. How did the space influence your work?

I first thought of the panels for the piece “The sound before the words, the voice of the puppeteer, one space: The sense of separation”. The three canvases used in this piece are different sizes, but they fit exactly the width of the first wall you see when you enter the gallery. 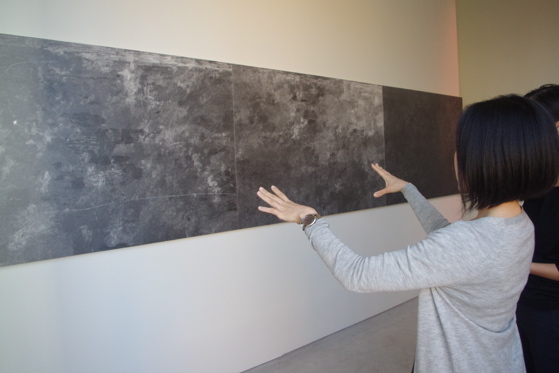 The artist explaining her three-piece work, “The sound before the words, the voice of the puppeteer, one space: The sense of separation” 2012

I also wanted to make use of the transformation that takes place between day and night brought on by outside elements. The drawings upstairs are the same–they will change as natural light from the large window disappears and night descends. 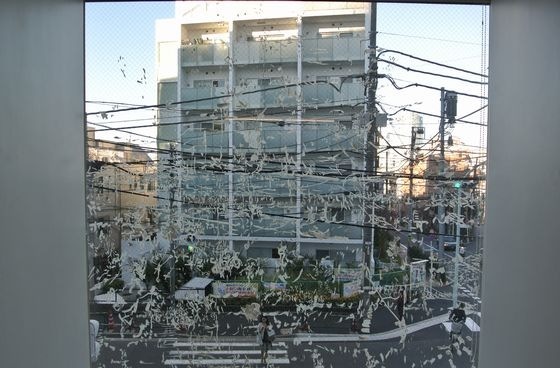 Large window (and painting) on the second floor of the gallery, “Between night and day”, 2012 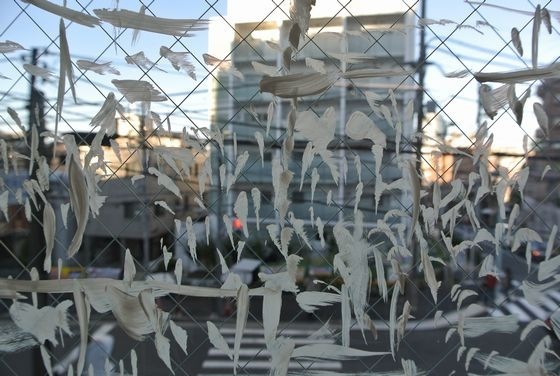 I had also just seen a stained glass window at a tiny church in Paris; I saw the image of the stained glass transferred onto an interior wall of the church by sunlight pouring in at just the right time of day. Natural phenomena leave great impressions. I’m always presenting what I’ve created, but I also wanted to work with spaces that encompass both works that I made with my own hands and outside elements. With the color film placed over one of the upstairs windows of the gallery, there’s a visual effect on the pieces downstairs. It even brings in some color, though only temporarily. Bringing in natural light also makes use of this gallery’s architecture without really changing the space. 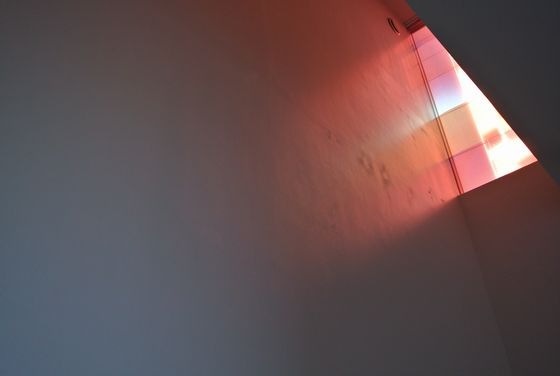 Natural light pouring in from a window covered in color film. 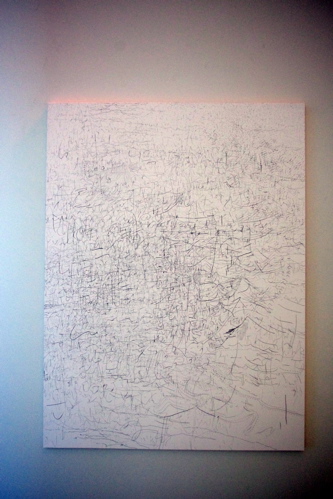 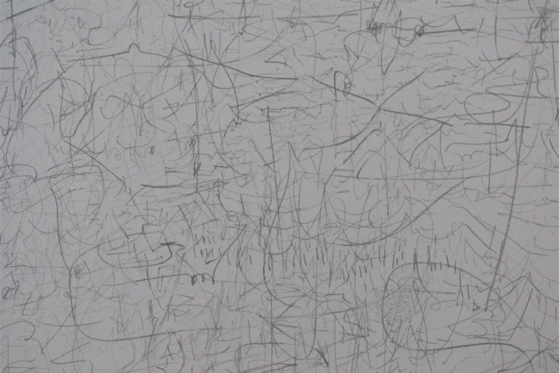 Details of “Writing, returning to the beginning” 2012

-I was told that the three-piece drawing was inspired by bunraku (traditional Japanese puppet theater).

I don’t know if it was inspired by it, but I enjoy bunraku. And in bunraku, there’s the movement of the dolls, the spoken words, and the sound of instruments. Different aspects of a single production develop individually, but come together, and the audience appreciates all of it as one story. Even the movements of one doll are split among three people at times. It’s as if the division makes the entire play unified. That’s something that I’ve been thinking about.

The subtitle for this drawing is actually “The sense of separation,” because I wanted to explore the meaning of separation. If you were to create one landscape, it’s probably better to just use one panel. There’s some meaning in separating a single piece onto several canvases. I’ve done three-piece drawings before, but I was concentrating more on bringing everything together. Learning more about bunraku, however, I started thinking more about how dividing functions could actually strengthen the unity of a piece. 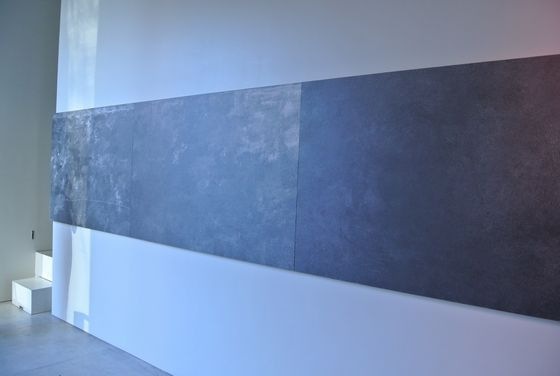 Naoko Sekine “The sound before the words, the voice of the puppeteer, one space: The sense of separation”, 2012

Changing impressions depending on awareness level

-Do you have a clear image as you start these drawings?

I don’t start my drawings with preconceived images. I also don’t develop them to the point where they are recognizable as specific images. Instead of having an overall image or a realistic image of something that exists, I try to keep everything a bit more vague, and different from an existing realistic vision. But even if my work appears far from a recognizable image, realities that can’t be seen can exist. So you can’t dismiss the possibility that something that can’t be seen actually does exist or is real. Depending on your awareness level, you can probably express and perceive indiscernible concepts. Actually, drawing is probably the best way to express such ideas. 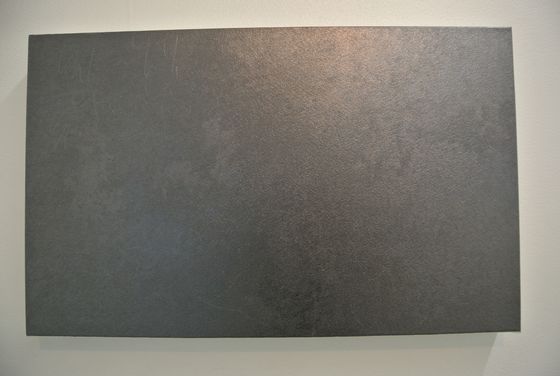 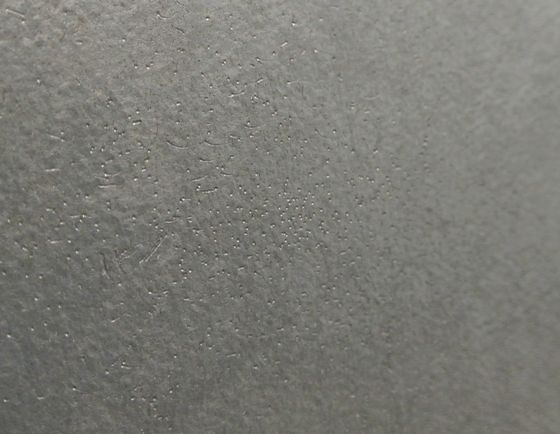 Metalic surface and stylus scratches and dots in “stars are out”.

-How is your work in this exhibit different from that of your previous exhibits?

My work in the VOCA exhibit earlier in 2012 was probably the most drastically different compared to my previous line of drawings. There was a period after the 2011 earthquake and tsunami where I wasn’t drawing at all. I finally had to start working, because I had the VOCA exhibit coming up. But I couldn’t wield my drawings as I wished. I was going through the motions of drawing, but I didn’t have control. I knew that I couldn’t continue that way, and became more aware of my act of creation. For this exhibit, I integrated more of that clear perspective towards my work. It was like I was in turbid water, and things had to settle first. The VOCA exhibit was also the first time I used styluses in my work, which I’ve always wanted to try. By scratching and indenting the canvas, the stylus adds extra texture and a reflective surface to my drawings. I’ve carried over both the stylus and my awareness towards my work into this exhibit, so it probably is a little different from past works. 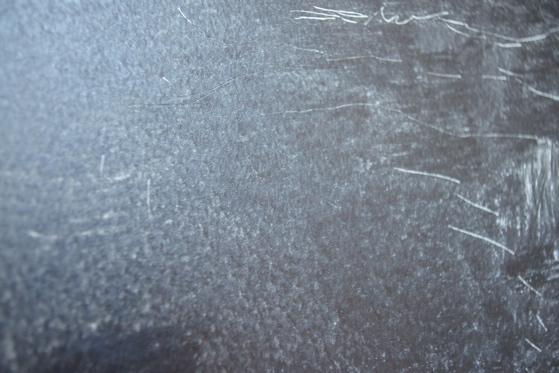 Close-up of scale-like imprints and stylus scratches in ” The sound before the words, the voice of the puppeteer, one space: The sense of separation” 2012

-You’ve talked about awareness a lot, but what do you mean by “awareness”?

I think of awareness as different perspectives. To me, a drawing is like a three dimensional object that has numerous sides. Depending on where you stand, the same piece can appear completely different. You can’t see everything at once, but your view changes as you alter your level of awareness. There is that elusive and volatile aspect to awareness, as well as a physical element. With my work, especially, the surface reflects light. Depending on where you’re physically standing, the drawings appear completely different. There’s the physical limitation that is also part of drawing. I consider both of these aspects when I work. 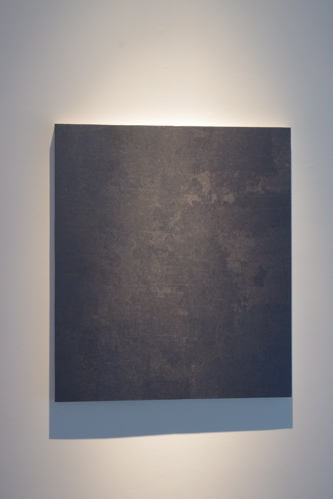 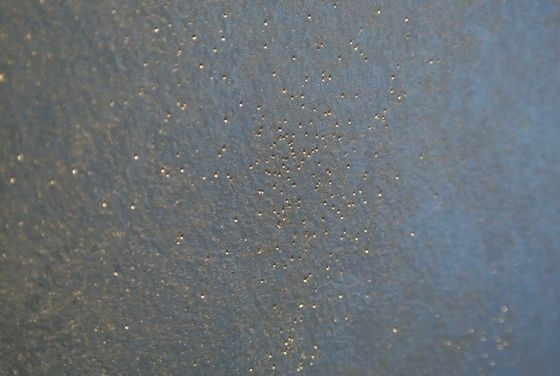 Trade secrets
As an added bonus, Ms. Sekine divulged that she used pencils from five different countries for the drawings in this exhibit (from Japan, the UK, Switzerland, Germany and the Netherlands), and can recognize where she used a specific pencil. But when asked if she would be introducing colors into her work anytime soon, she laughed. “That, I won’t tell anyone,” she said. Considering the cultural influences evident in her drawings–from Parisian stained glass to Japanese bunraku–her fans can expect her work to develop further in France.