Opened his own gallery in 1996, Tomio Koyama has been one of the most important gallerists, especially known as bringing Takashi Murakami and Yoshitomo Nara to the world wide audience. Through the interview, he told us the importance of doing what others are not and having your own way of thinking. 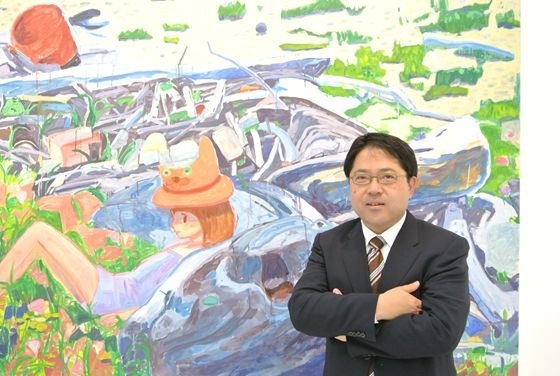 Just like a new world widely opened up for you.

-How were you attracted by contemporary art?

When I was a junior high school student, my friend showed me a catalogue of Jasper Jones, whose work was completely over my head. Although I couldn’t understand his works, it attracted me. At that time, reading a heavy novel or seeing a difficult movie and play were hip and happening things to do.

I visited Hara museum to see Raynaud, Jean-Pierre’s work. The places where I can see the physical contemporary art work were limited. Others were Seibu museum and some commercial galleries.

-Why was it interesting to see difficult works？

When you can’t understand the work, you learn about it through books. And gradually, you got to know what the artist is expressing. It is just like a new world widely opened up for you.

As I start to learn about the artists’ background or history, a map has built up in my mind. “This artist is trying this method.” or “The point of the artist is this.” This is my own map and it is not nessesarary to include famous artist. There are well-known artists whom I am not interested in anywhere in the world.

Even you face a famous artist, it is imporatant to have a critical eye and see the work detachedly. “Is it really interesting?” I often ask myself. I think everyone has their own senses. Some will express that sense as “I prefer Julian Schnabel to Anselm Kiefer.” Despite Kiefer was financially successful than Schnabel, it is important to have your own preference in art.

-Were you only interested in Western contemporary art at that time?

I was not only interested in the Western contemporary art but also in Nihon-ga (traditional Japanese painting) or ceramics, without any boundaries in my mind. So it is really connected with what I am doing right now. Interesting painting must be existing in any country, any time. There is no definition for what painting should be like.

Many kinds of phenomenons happened or are happening in each time, all around the world. Artists did or are doing what they find interesting at that moment. It is seen as an exciting art when the work is successfully created with a great idea and techniques. Great work could be created any where at any time in the history.

Instead of disliking Chinese contemporary art, I believe there must be an interesting work among them. There must be something fitting to me. I don’ have a biased view.

I did what others didn’t. There is no meaning to do the same.

-Why did you decide to open your own gallery?

In the middle of 90s, other galleries were showing older artists. I opened my own gallery to show the artists who were in the same generation (around 33 years old) such as Yoshitomo Nara, Takashi Murakashi and Chiezo Taro.

There were many artists who were working on Abstract art or defining the techniques of art in the 90s of Japan. However, Abstract art originally happened in the 70s, New York and they were just following it. There is no reality for our generation to do the same thing. “What is reality to us?” That is contemporary art.

Nara’s artwork is dealing with an emotional part which allows you to put your emotions in it. Emphatic work is not much seen in the Western paintings except Edvard Munch or Otto Dicks. I think it is more likely to be rooted in the Japanese art history such as Shunsuke Matsumoto.

-How was the early stage of your gallery?

Opening the gallery in April (1996), I flied to Los Angles in December to join an art fair named Grammacy Art Fair, which is the predecessor fair of the Armory Show (New York). It was organized by 5 young New York gallerists including Mathew Marks. Artist, Dan Asher introduced me about the fair. The fair was held at Los Angels, Miami and New York, all at a hotel. Hotel Vermot in Los Angels were all suite rooms and the participating galleries used each room to show their works. In the now, they are all famous gallery but White cube, Mathew Marks, Jeffrey Deitch were all at the fair. They were young and seeking for a space to show their works.

Since there wasn’t enough interesting art fairs in Los Angels at that time, many collectors stopped by the small indies fair. I remember that Peter Norton bought Murakami’s small painting at $2,000 at the fair.

I went abroad since there was no other Japanese galleries there. I could be a special existence. That’s nice, isn’t it? At that time, other Japanese galleries were more interested in showing in a prestigious space instead of a indies fair. Importing foreign artists to Japan or showing well-known Japanese artist inside of Japan, was what others did. I did what others didn’t. There is no meaning to do the same. 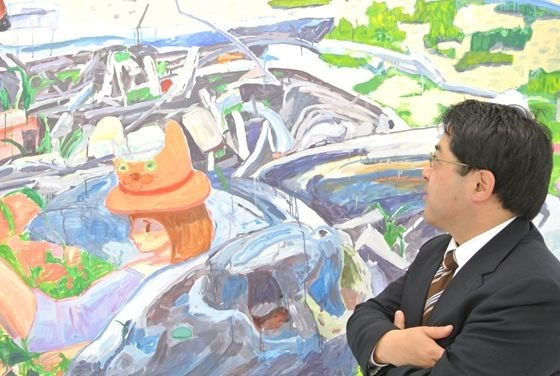 -How do you choose the representing artist?

Friends, favorite movies, music or part-time job, many things have influenced you to be yourself. Human beings are all inputting something. Artists are the people who create an output with it. What and how you catch the inner side of yourself is important. It is often said but, for example, Takashi Murakami adviced the artist, Mr. to pull out his inner otaku element into his work. I do not advice to my artists like that but there are some artists who can do it by themselves.

But knowing what is inside of yourself is not enough. Techniques are also required. Even if you have a great idea, there is no meaning if you couldn’t put it on a canvas.

-What do you care when you show a young artist?

If the artist do the first exhibition at the age of 24, his/her works were brought from the 24 years of his/her history. As we plan to hold a show for every 2-3 years, the next exhibition will be a big pressure for the artist since 3 years compared to 24 years is a huge gap. There are some artists who can develop their expression in that 3 years when others can’t. I consider to hold the first show after the age of 27 since they get matured.

It is not an end by showing the artist just once. We hold exhibitions every 2-3 years to show the change of the artist. Watching how the artist has developed is also the interesting part of art. We want to tell that point through our gallery.

What I often see is the artist whose ideas go forehead too much or just following the authority. That is not good. This may be a weird example but, there are some people who say that war is not good. It is not good to kill people, obviously. That is easy to say. But if you are forced to be at that situation, I doubt that whether the one can say the same thing. It is important to put your foot in their shoes. Good and bad, both are included in our lives. I don’t like the work which is just suggesting the “right” thing to others. That is lacking a sense of ownership.

We need to evaluate Japanese art by our selves.

- How do you see the last ten years in Japan?

Information of art is flooding. Many magazines from culture to hobby are writing about art. It is not seen in New York where art is only written on a magazine specialized in art. There are many spaces to see contemporary art in Japan including a department store, just like our new gallery space opened in Hikarie (a new department store including clothing shops, theater and restaurants, opened right next to the Shibuya station in 2012). Although when it comes to collecting art, there are still obstacles.

Before the WWII, there were active private collectors whose collections can be seen at Nezu museum, Matsukata museum and Ohara Museum.

Public museums were active after the WWII (in 1945) until the economic bubble burst (in 1991-93). Public museums were playing a large roll in the art market. They were collecting art works including the Western paintings, instead of private collectors except the ones who bought art as an asset. Public collection may be the one of the reasons of why Japanese people inclined not to buy art privately.

-What is needed to bring people back to buy art?

For example, German museums show young artists and American curators buy young artists’s work or ask a collector to donate young artist’s work to their museums. They try to build up young artists value by themselves. When it comes to Japan, what I often hear is that it is difficult for a museum to buy a work whose value is not stable yet. One artist was asked to hold an exhibition abroad to be acquired. Japanese must have our own system to evaluate our art. Things are getting better these days, though.

-Buying art and seeing art are unrelated action in Japan.

There are some magazines which suggests the reader to choose an artwork within 100,000yen (=$1100). I don’t like that approach. I don’t want people to buy art with a budget. It is better that when you visit an exhibition, you can know the price and the place to buy.

Not only selling printed editions, but there should be an information of its original painting’s price or who are collecting the artist’s works.

-Why did you decide to open new brunches in Hikarie (Shibuya) and Singapore?

There must be a Japanese way of selling art. Gallery space should be accessible. We should show the prices explicitly and provide a chance to meet the artist. We got new collectors by holding exhibitions of Damien Hirst or David Lynch here (Hikarie).

Regarding to Singapore, we also need to reach Asian market. I want to sell young Japanese artists at that space. There will be a museum opening in the near future right next to our space. There are galleries from Korea, Filliping and also Singapore. Filipino travelers go to Filipino gallery and they also come to our place as well. Many business managers come to buy art. These are interesting parts of the Singapore brunch.

-Sounds like a exciting future is waiting. Thank you for your time.