“Her name is Abstra” at Daido warehouse, Kyoto

12 artists group exhibition under the theme of “abstract art” is now open at an old warehouse in Kyoto downtown. The exhibition is independently run by the artists themselves to raise a question to us of what the abstract art means today. 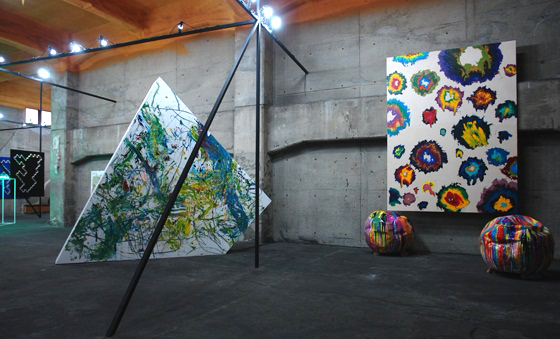 Exhibition view of “Her name is Abstra” at Daido warehouse

Twelve artists, almost all born after 1970, are due to take lead role in the next art scene

Why abstract art now for new generation artists? Twelve artists, almost all born after 1970, are due to take lead role in the next art scene. Abstract expressionism is just a bygone phenomenon? 21-century artists are already free from any ideas of the abstract or figurative? But it might be a wrong assumption from the viewer’s side. As a creative practitioner, every artist respects the precursors and feels close to them. Participating artists decided to look back at the starting point of modern art to go one step further. 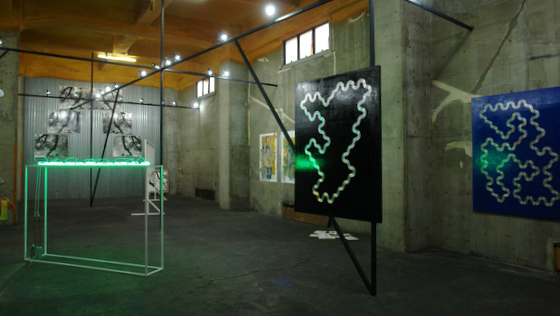 Exhibition view of “Her name is Abstra” at Daido warehouse

The chairperson of Executive Committees, Mr. Kazuhito Tanaka declared in the exhibition statement as follows. “Abstra in the title means a fresh form of abstract art. Historically, abstract art reached its peak by the mid-20th century Abstract expressionism. It was a powerful and masculine movement. But what we’re developing today is abstract art that has more feminine aspects. A figure named “Abstra” will be a muse who we are seeking for on the way to our own new styles.” 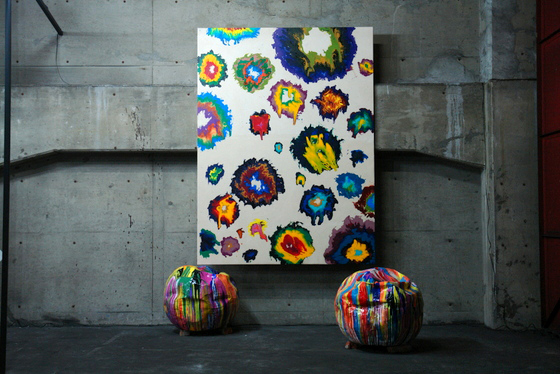 Tomonari Nakayashiki is a painter characterized by his unique works those are bringing vivid abstract objects into the representational landscape. This time, however, he features abstract subject only. The marbling expression used for colorful rings is also his signature. It is hard to actualize this marbling effect on canvas with acrylic paints. It needs delicate controls on temperature or the moisture in paints, and concentration on the condition of surfaces. 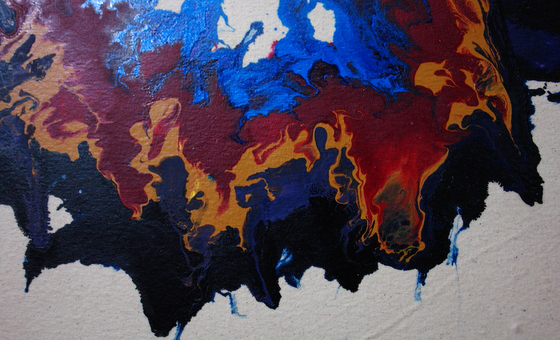 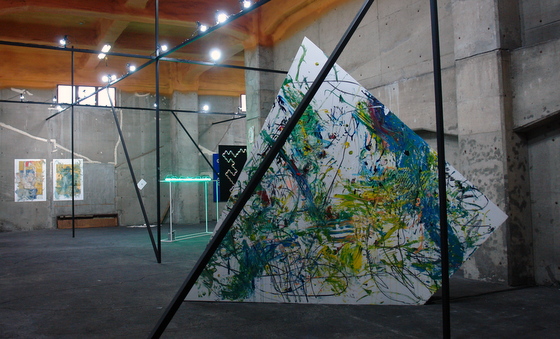 Hidekazu Tanaka has consistently dedicated himself to painting abstract subjects. He is trying to develop various conceptual approaches as well. Live painting is one of the most important methods for him. He live-painted this work on the first day. 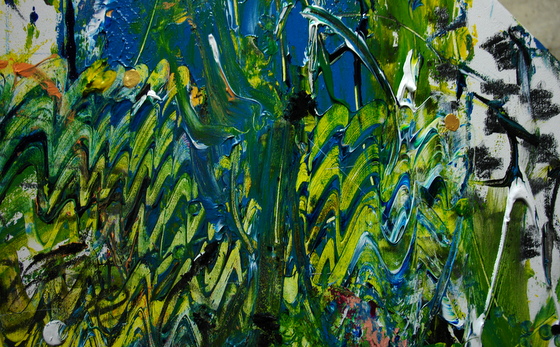 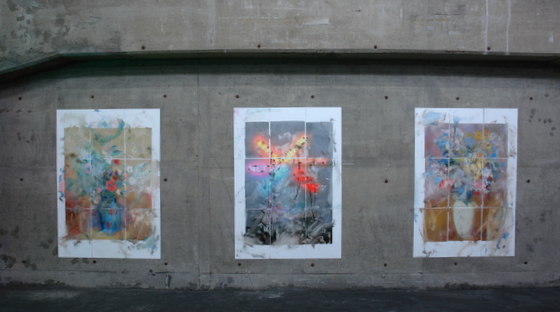 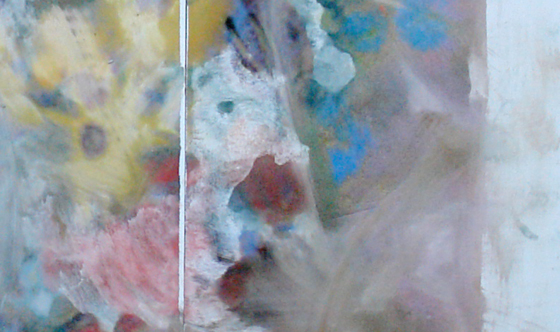 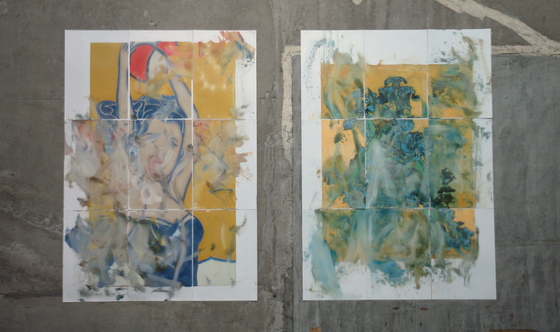 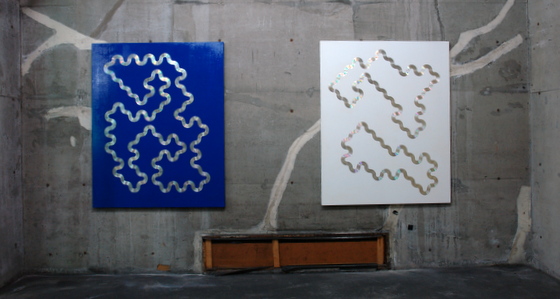 Lyota Yagi is exploring new approaches to seize surroundings including its sounds and the flow of time by using various mediums like vinyl records, video tapes or musical instruments. His works are right in a gap between visual art and new media art. Three pieces for this exhibition were made from the surface layers of CD. Meiro Koizumi, recently won the Grand Prize at Asian Art Biennale Bangladesh 15, performed third piece from his “Eternal Virgin” series. He took an image of Setsuko Hara, well known for her role as Haruko in Ozu Yasujiro’s Tokyo story, and made a performing intervention towards her image. The performance work consists of a mixture of video sampling, voice dubbing, and violent gesture of pencil drawing. These drawings are the remains of the performance took place on the first day. 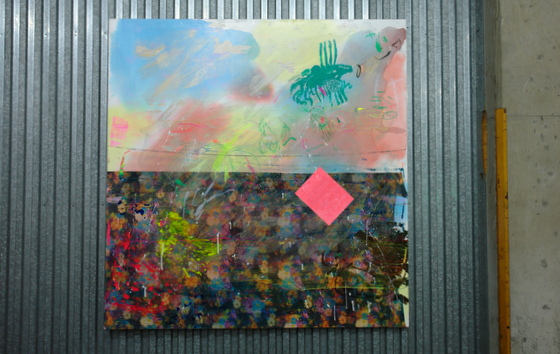 Hiroshi Tachibana is a US-based Japanese artist, who has recently left NY and now works in San Francisco. He focuses on accidentally created abstract expressions in his painting. He also attempts to bring together what he creates and what others create on one canvas with layering techniques. The work is homage to an American abstract expressionist painter, Michael Goldberg. 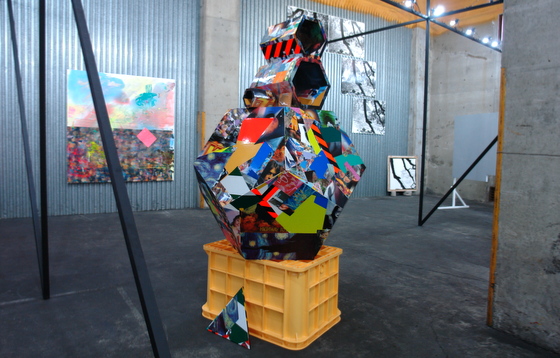 “Ghost in the Liquid Room (lenticular) #3″ by Teppei Kaneuji

Teepei Kaneuji is widely known for his three-dimensional works created by collage techniques. In this work, he pieced together the mishmash of lenticular printing stickers into a huge polyhedral sculpture. “Something hidden in A” by Saori Miyake

Saori Miyake is an artist who has been focusing on photogram technique. She creates works by exposing the painted film and some small objects together in an improvised manner. 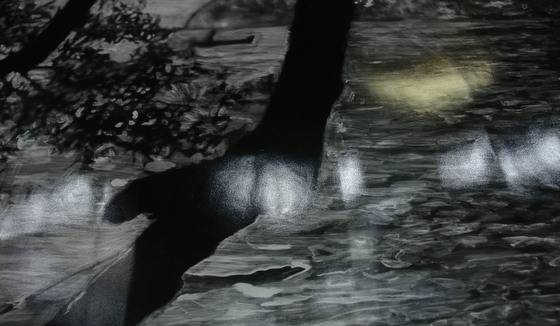 Close look of “Something hidden in A” by Saori Miyake 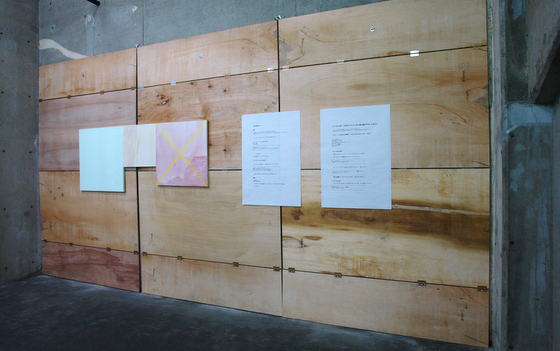 “The evening of three-cornered wooden horses” is a collaborative installation by Ei Arakawa and Shimon Minamikawa. The work consists of paintings, some scripts and this large wooden boards in the back. It finally turns into a performance piece at some point in the exhibition period. Ei Arakawa is a performance-based artist. “See Weeds” is his performance focusing on the Gutai group, the artistic movement emerged in mid-20th century Japan. It was performed in les Abattoirs in France. 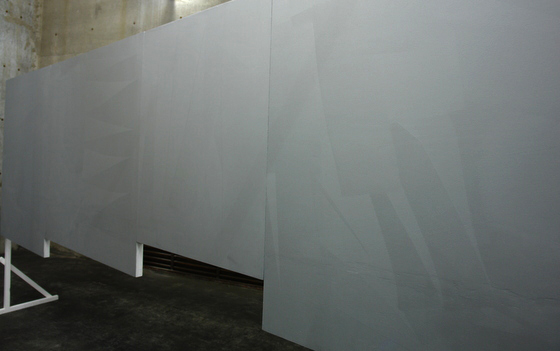 Shimon Minamikawa is well known for his illustrations of Shuichi Yoshida’s novel, “Yokomichi Yonosuke”. But basically he gained a wide reputation in his simple paintings with restricted colors, stripe and dot patterns or roughly sketched figures. For this exhibition, four paintings all in gray are on display. Slightly uneven touches left behind. 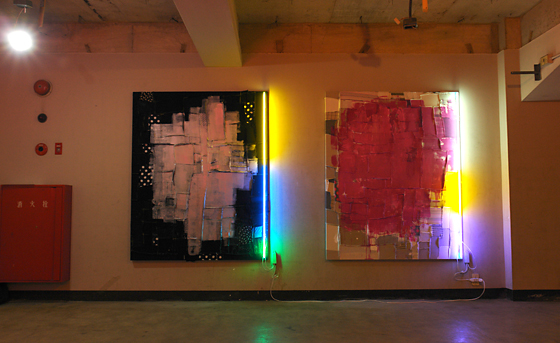 Takashi Kunitani is an artist who is attracting the wide attention for his neon work installation. Neon is mostly stimulating media, but his works have strange tranquility. Collage works with neon and three standing neon signs are on display. Every piece brings significant effect to the space. 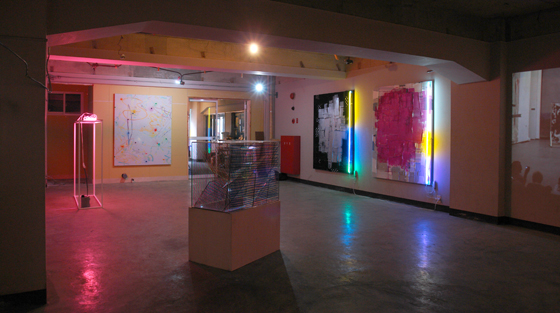 Reality more deeply than what galleries or museums can offer

The venue is an authentic warehouse which is still in active use. The artists asked the owner to move away whole products stocked here during the exhibition period. It was worth it. Space provides a perfect combination to artworks. In particular, how cool they look with corrugated aluminum covered walls or cracked concrete walls filled with plaster in the background! I felt the reality more deeply than what those all white galleries or museums can offer.

photo and text by Natsuki Niimi