What would it be like if we can actually “see” our emotions? Ando connects his emotion with his physical experience and expresses it in his work. He thinks emotion is like a deep vast water space changing its color and shape flexibly. Moreover, Ando draw his images not by painting, but by dyeing cloth using a traditional dyeing technique called “ro-ketsu-zome (battick dyeing)”. Proceeding over many steps to dye, Ando depicts an emotion with complicated and organic shapes. 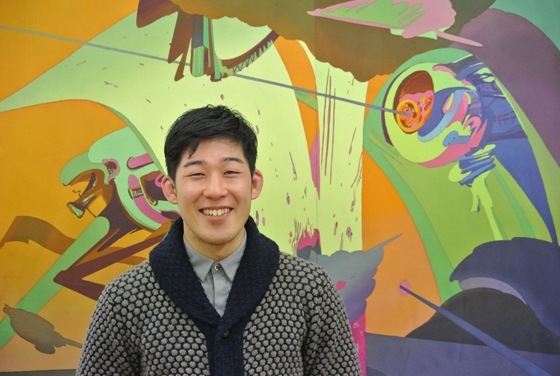 Ryuichiro Ando in front of his work. 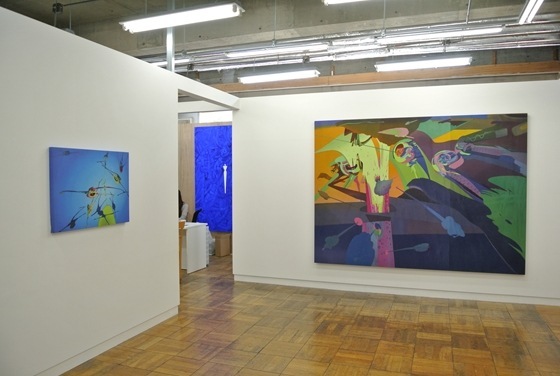 -Can you tell us about the technique you use?

It is called “ro-ketsu-zome“(battick dyeing), which is a traditional dyeing technique. In “ro-ketsu-zome“, wax is placed on the part of the cloth not to be colored. Using a paint brush dipped in the wax which was melted under 150 Celsius（=300 Fahrenheit), I draw the shape onto the cloth. As the wax cools down and solidifies, I dye the cloth in colored water. The part that has been covered with wax is left white while the rest is colored. To dye the next color, the previously colored part is covered with wax so as not to be dyed again. This is how it basically works.

Compared to painting where you can put any color at anywhere you want, I can only dye one color at a time.

Ryuichiro Ando “search for the sake of Horizontal Line” 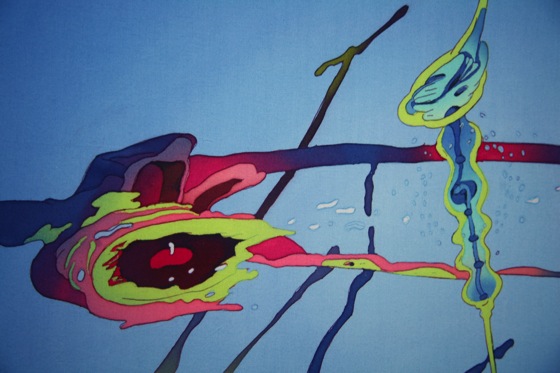 Detail of Ryuichiro Ando “search for the sake of Horizontal Line”. Every color dyes on cloth.

-How about the thin lines? How did you dye them?

First, I draw the final image on paper the exact size of the cloth and then transfer it across. The colors are almost always determined at this time. 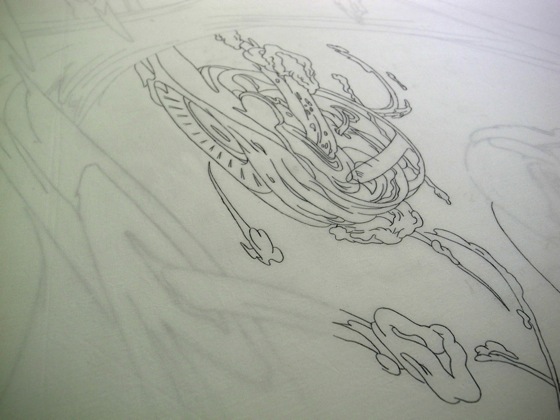 Drawing lines on the cloth by tracing the lines originally drawn on paper underneath.

Then, I put the wax on the entire sheet and then draw the lines by scratching it with a stencil just like an etching. The scratched part will be colored and that is how the lines are drawn. I wanted to realize more complicated, detailed expressions in my work and that is why I chose to draw outlines. Without lines, the boundary of each color becomes vague. 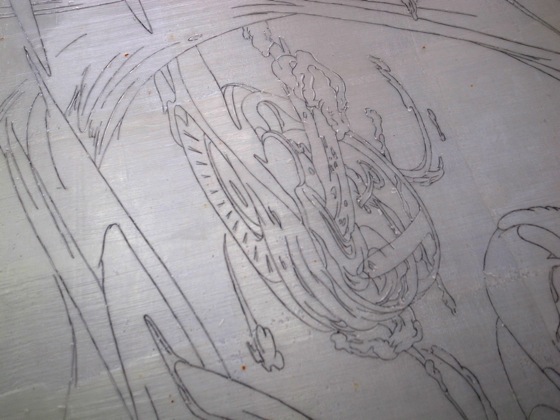 Scratching the wax with a stencil by tracing the black lines, just like etching. 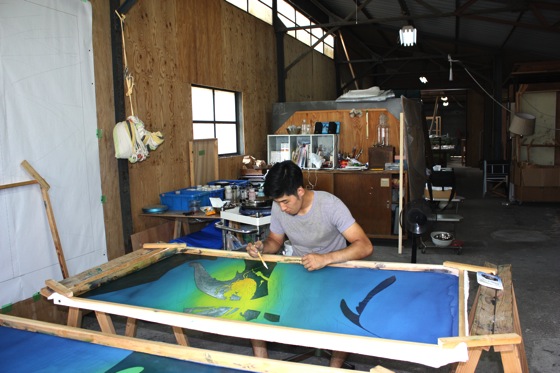 Ryuichiro Ando dyeing his work at the studio.

-Do we have the chance to see this “ro-ketsu-zome” technique in our daily life?

Actually, “ro-ketsu-zome” is not used in our daily life anymore. It was used to make Kimonos a long time ago. Originally it was a technique brought over from Korea but was almost forgotten until the Meiji period (late 1800s – early 1900s). In my grandmother’s generation, the technique was taught in school. Although, at that time, “ro-ketsu-zome” used only one color, and enjoyment was found in the accidental patterns formed by the cracks in the wax which naturally happened as it became firm. So my grandmother was surprised to see my use of “ro-ketsu-zome” which is colorful and drawn with planned lines.

-Why were you attracted to this method, compared to other dyeing methods?

Other dyeing methods require you to decide the shapes within the cloth at the very beginning. There are also many preparatory steps which are not directly related to the final appearance of the work.

The interesting feature about dyeing is that the colors become slightly mixed up each time I dye a new color. For example, in one work I colored almost the entire sheet in a yellow-green color and washed it out to put the next color in orange. Even though it has been washed, a tinge of the first color is left and it gives a unique effect when next to the orange. It is not the same orange but it becomes a distinctive orange.

I need to decide how to allocate the colors in the beginning since complimentary colors affect the image strongly. However, it is fun to encounter these unique colors during the creation process.

-Why did you become interested in dyeing instead of painting or other media?

I originally had an interest in textile design or mass produced clothes. However, as I learned about clothing, I found myself not wanting to create something that followed the current fashion trends. I am more interested in creating what I have in my mind. 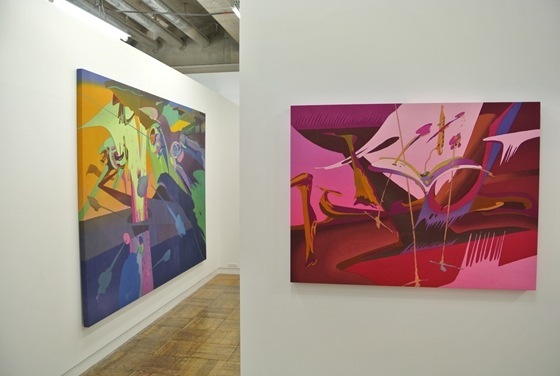 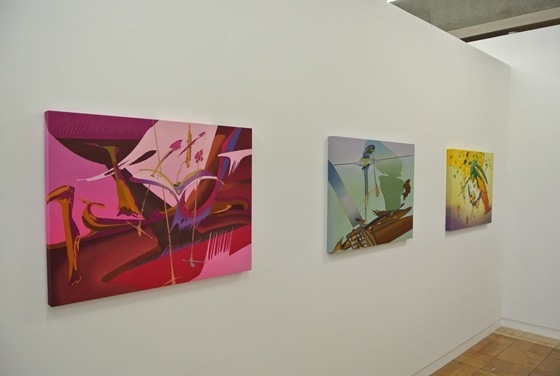 Emotion is just like water transforming inside of my body

-The shapes are very unique in your work, where do they come from?

I imagine what is inside my body. I have an image that there is an everlasting space filled with water. As water changes its shape to gas or ice depending on the environment,? I thought it is similar to how our emotions behave. For example, when you are hurt, you will physically feel your heart is hurting. As being hurt is something you thought in your mind, it is likely to feel some reflection on your head. Instead of that, you feel your physical heart is squeezed.

Obviously, organs have physical boundaries, but I imagine that the human body is filled with watery things without any boundaries. They create shapes, moves and turns. Imagine when a stone is thrown in a water tank, there will be waves generated. I imagine our emotions are behaving just like that inside our bodies. 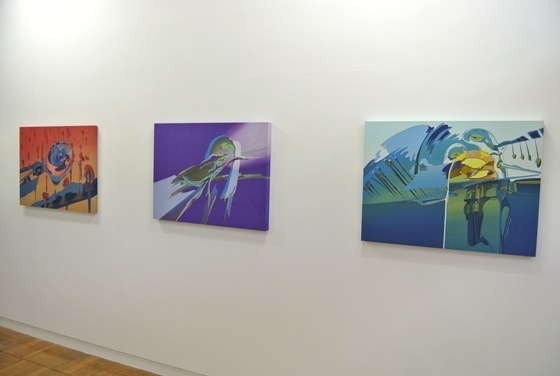 -Are you depicting one specific emotion from your experience?

Not exactly. I am not expressing one actual moment in my life but more like what has happened inside of my body.

When I scuba dive and surf, I can feel my body smashing the waves or floating in the water. Those physical experiences and emotional memories are pretty much what is influencing me.

I saw a very blue transparent space without any end when I dived in the ocean. Our sights are usually interrupted by walls in our daily life except when looking up at the sky. There is no wall in the sea and it is quite similar to the image of my inner body which is filled with water holding energy spreading far away just like the universe.

I connect my emotional senses with my physical experiences and express this in my work.

-Could you tell us about your other physical experiences?

I practice Brazilian Ju-jutsu. Judo is a modernized version of Ju-jutsu. Compared to Judo, which determines the winner by the beauty of skilful techniques, Brazilian Ju-jutsu puts more points on the skill which damages the body, for example the action of wringing ones neck.

When I do Brazilian Ju-jutsu, balancing my body is important. How you position your centre of gravity makes a difference.

The same thing could be said about emotions. It is important to balance them. I titled the exhibition “for the horizontal line”. It implies this balancing of one’s emotions. 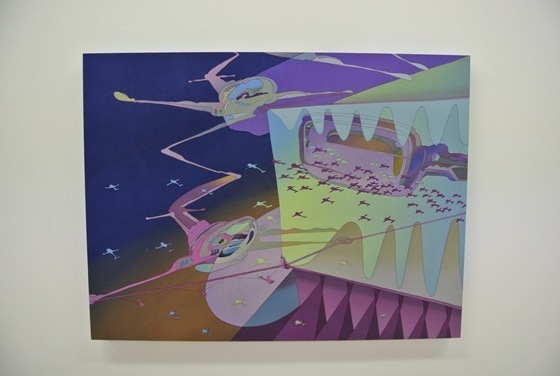 Ryuichiro Ando “gather for the sake of Horizontal Line” 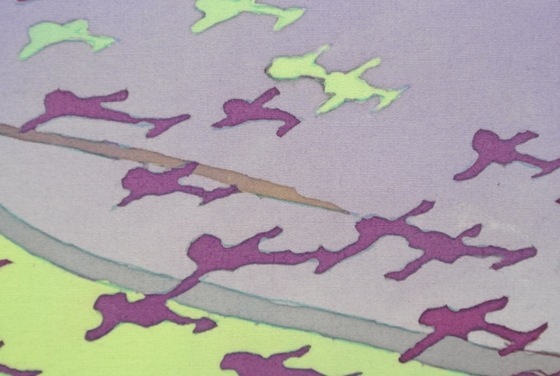 Detail of Ryuichiro Ando “gather for the sake of Horizontal Line”

-There are some figures which resemble airplanes in your work.

Since airplanes fly by balancing its body; it is a symbol of balance. It is not representing a physical airplane flying in my work but more like some watery thing that has changed its shape into an airplane. 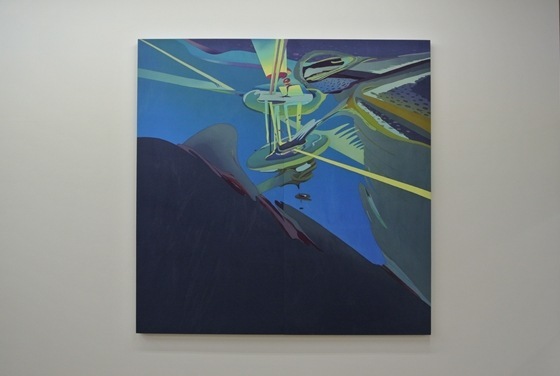 Ryuichiro Ando “radiate for the sake of Horizontal Line” 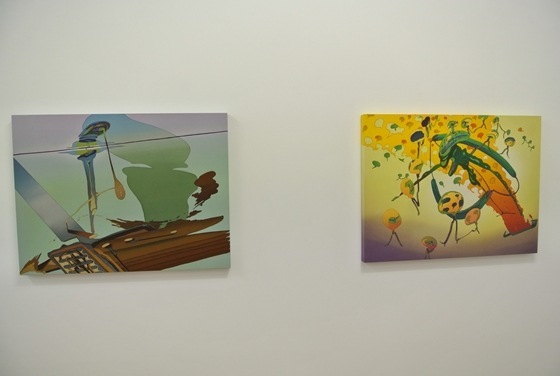 -To me, your works look like scenes from a science fiction movie. How do you get your inspiration?

I am not directly getting inspirations from those kind of movies. Beside all of the physical activities, I get inspirations from books and magazines. I like the magazine “Courier” which has news from all over the world. Or “Tranzit” which is a travel magazine with beautiful photographs of nature. I like to know what is actually happening in the world more than reading a fiction novel. Ethnicity and biology are also interesting to me.

-How do you link a shape or a visual figure to the emotion?

I care about my physical experience a lot and along with that I give attention to the movement of any object. Movement inspires me to make my experience into a physical shape 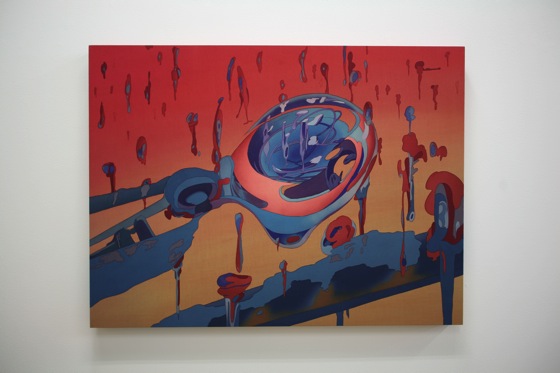 Ryuichiro Ando “assemble for the sake of Horizontal Line”

Talking with Ando, I learned that emotions are not only about being sad, happy, angry or anxious. There are many types of sadness and anxiety. It is not expressed in a single color or in a simple shape. One’s happiness is inevitably different from another’s but we all call it by the same name; “happiness”. As well as looking at what’s happening in the physical world, we should try to see the unseen emotional world spreading inside our bodies.