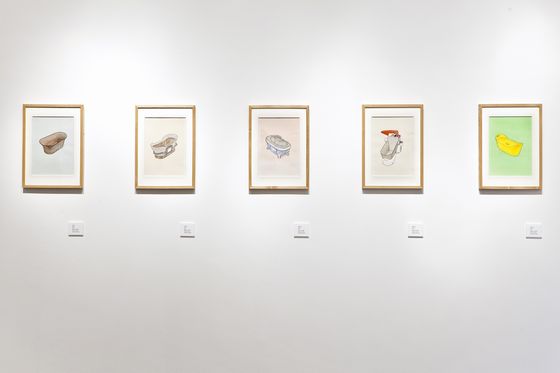 Nestled in a verdant, shaded crook off Singapore’s glitzy shopping belt of Orchard Road is the Japan Creative Center. The white and black colonial bungalow was converted into a fully air-conditioned centre to promote Japan’s cultural exports, and it played host to artist Akira Yamaguchi’s solo exhibition, ‘Singa-planet’.

Singa-planet, which ran from 12 March to 6 May 2011, ran in tandem with the Singapore Biennale. Showcasing both old and new works, the exhibition offered visitors a chance to view both Yamaguchi’s newer series as well as the artist’s older works. 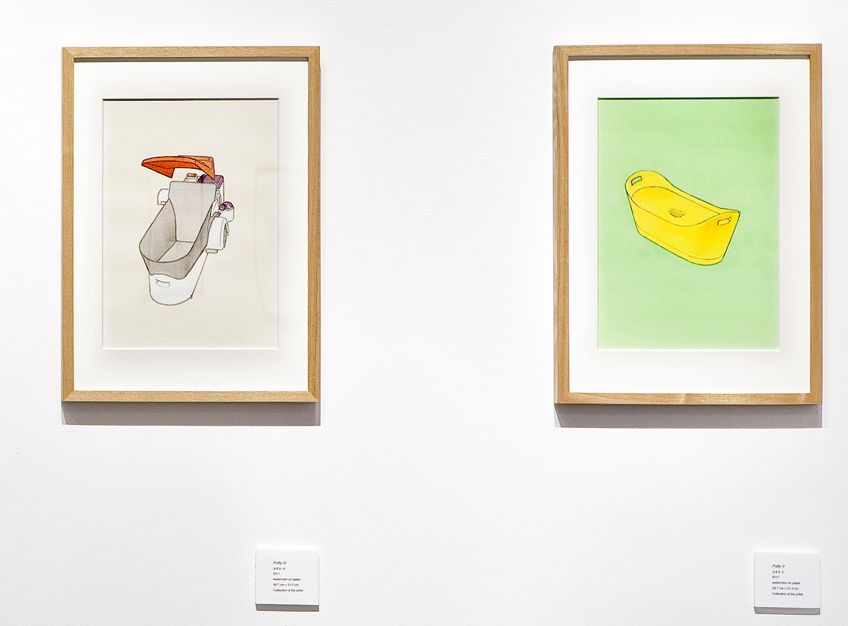 Yamaguchi’s Singa-planet series grew out of his trip to Singapore. The Tokyo native, fully aware of his status as an outsider to the society he sought to capture in his art, declared himself a ‘tourist’ – but this did not stop him from diving into the heart of the culture of this young city-state and dissembling it like a curious child, only to put it together in stranger and almost magical forms.

Yamaguchi’s main objects of interest were not just the towering skyscrapers of modern Singapore, or the Merlion, the sanitised symbol of Singapore’s tourism industry. The tall, box-like forms that dot the island – public housing known as HDB blocks, also the heart and home of the average Singaporean – fired his imagination. 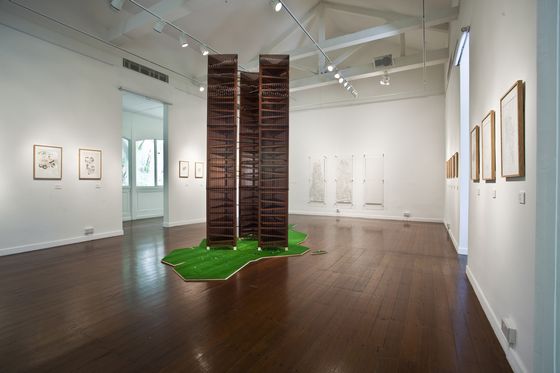 “Skyscrapers in Singapore stand high in the sky as if there were no such thing as gravity. They throw ordinary people off the ground to the upper floors,” he wrote in a message to visitors at the exhibition.

“People who used to be neighbors on the ground are now divided by the same distance, in mid-air. What kind of a gateway would a carefree tourist’s impolite gaze discover inside the buildings?”

The artist’s findings are condensed into a few HDB-related pieces that form the core of the exhibition.

The painting ‘Singa-planet’, from which the exhibition derived its name, features Singapore as a large ship floating on a sea of blue. The ship’s body merges Singapore’s notable landmarks, the touristy, the cultural and the mundane, with the HDB blocks as a central pillar. Yamaguchi spares no effort in adding the smallest details – the sloping roofs of traditional Malay buildings, shophouse facades, hawker centres (cheap food centres popular with locals) – that will surprise and delight the Singaporean visitor for its familiarity. 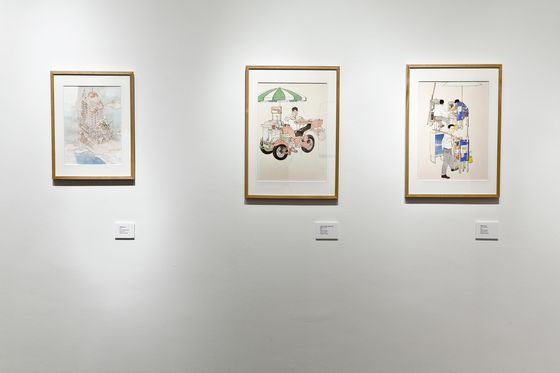 “Singa-planet”, seen on the left, was used as the main image for posters and fliers to the exhibition.
Photo by Ernest Goh

Yamaguchi also used HDB blocks as a metaphor for life in his installation piece that dominated the exhibition space. In the centre of the main exhibition hall, three brown, triangular structures were set up on top of a Singapore-shaped island of green. The structures represented HDB blocks, and guests were invited to drop beads that were lying on ‘Singapore’ into the structures. The bead’s journey down through the structure – with some getting stuck until another bead comes along to nudge it along – represents a journey through life and our need of others. 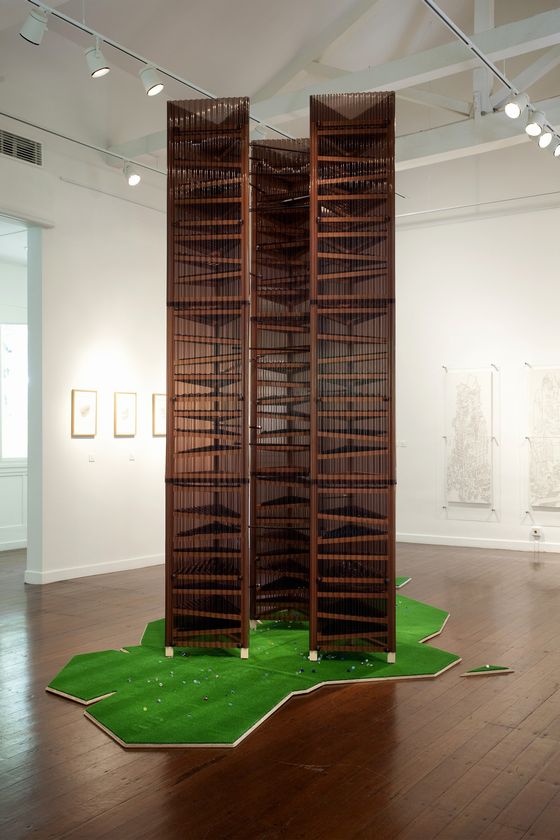 During a talk on opening day, Yamaguchi explained that life is a battle against the slope of time, mankind still aspires to higher and better things. This paradox was expressed in the beads tumbling downwards in a structure standing tall and proud.

The third features three white panels with ink drawings, they appear at first glance to be a monochrome version of ‘HDB’. But where ‘HDB’ may be seen as a reflection of Singapore in its present state, this work is a look at where Singapore came from and where it is going. 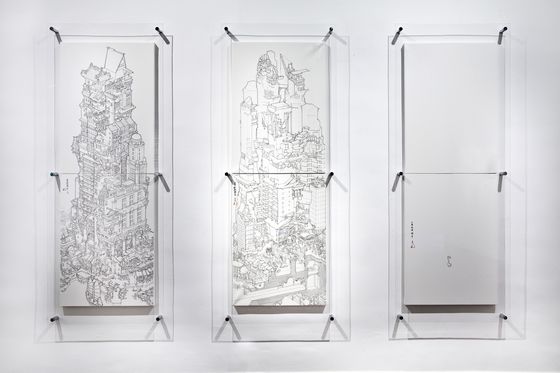 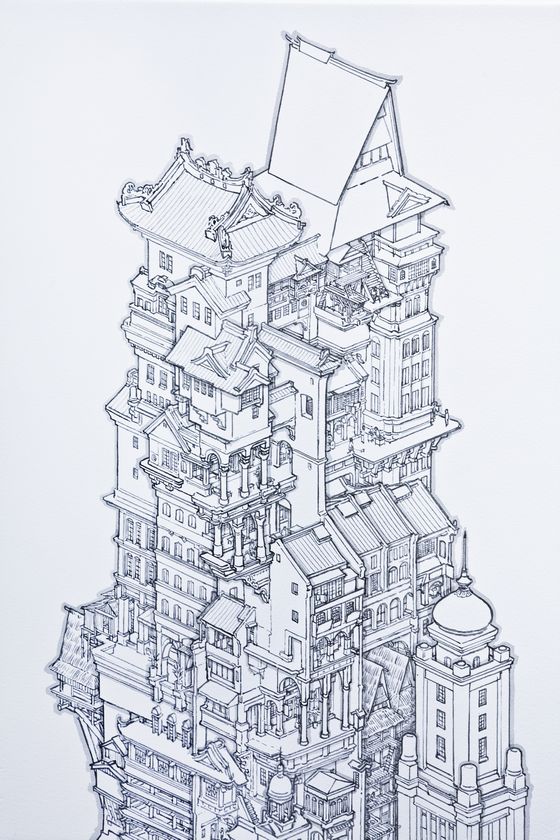 A tower is depicted in the first two panels, also merging familiar Singaporean landmarks. However, the vague lines in the middle panel are a contrast to the firm, detailed construction in the first panel, that outlines Singapore’s past. Sampans (wooden boats) are a clear throwback to Singapore’s earlier days.

On the other hand, the incomplete tower speaks of the unknown future, and shows Singapore as a new project and a work still in progress. This idea is further emphasised in the last panel, which is blank save for a germinating seed, that speaks of Singapore as a fledgling nation.

Yamaguchi also experimented with a distinctly different media – film – for this exhibition. The minute or so long video showed a series of living rooms in HDB flats, panning from the floor-up. By stitching these shots together one after another, the viewer feels like he or she is moving upwards through a cross-section of a HDB block. This lent an intimate, familiar feel to the exhibition, and showed that Yamaguchi had tried to surpass his ‘tourist’ status in examining the heart of Singaporean-ness. 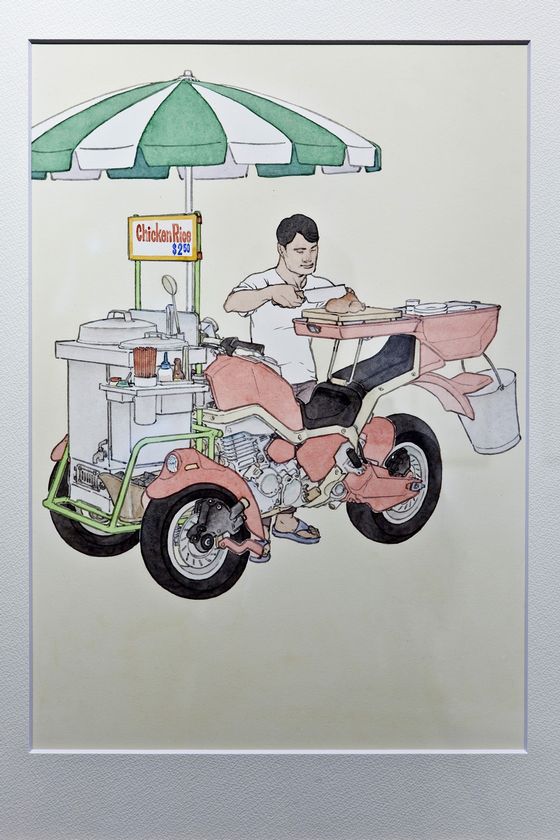 One depicted a mobile chicken rice (a dish popular in Singapore with both locals and tourists) seller, merging both the mobile ice cream seller and the dish’s popularity. Another painting and possibly one of the highlights of the exhibition for me, presented Singapore’s tourism icon the Merlion as a kind of Transformer vehicle – shifting and reassembling to become a cannon and even an airplane. The old-school chamberpot and opium beds were also given new leases of life, as Yamaguchi put a modern spin on these two relics, a motif common in his older works. These themes arguably form the heart and principle of Yamaguchi’s art, who, tongue firmly in cheek, is determined to challenge time-space boundaries.

Said older works were also on display, most notably his large murals. What was interesting was the modern take on tradition – paintings that from afar appeared to be traditional birdseye view portraits of old Japan upon closer inspection are ironic takes on modernization, wondering ‘What if the Samurai had persisted to this day’ in ‘A Break in Four Seasons’ and ‘What if all the natural elements, this bird or this plant, were nothing but robots’. 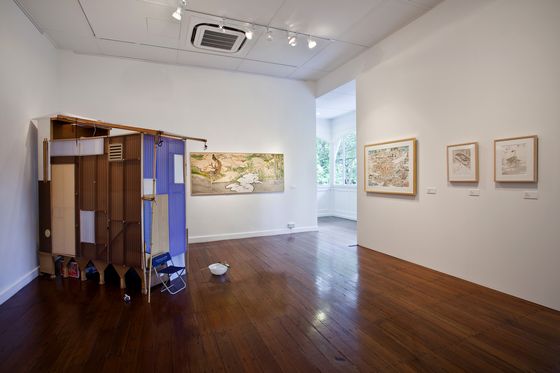 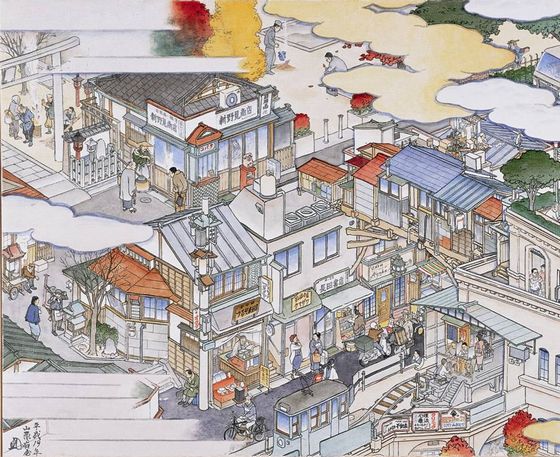 Detail of the artwork “A Break in Four Seasons”.

Yamaguchi is fascinated with modernization – its costs and potential, and retains his sense of humour. Singa-planet was a refreshing and amusing view of Singapore through the eyes of a tourist that both Singaporeans and tourists alike would have enjoyed.